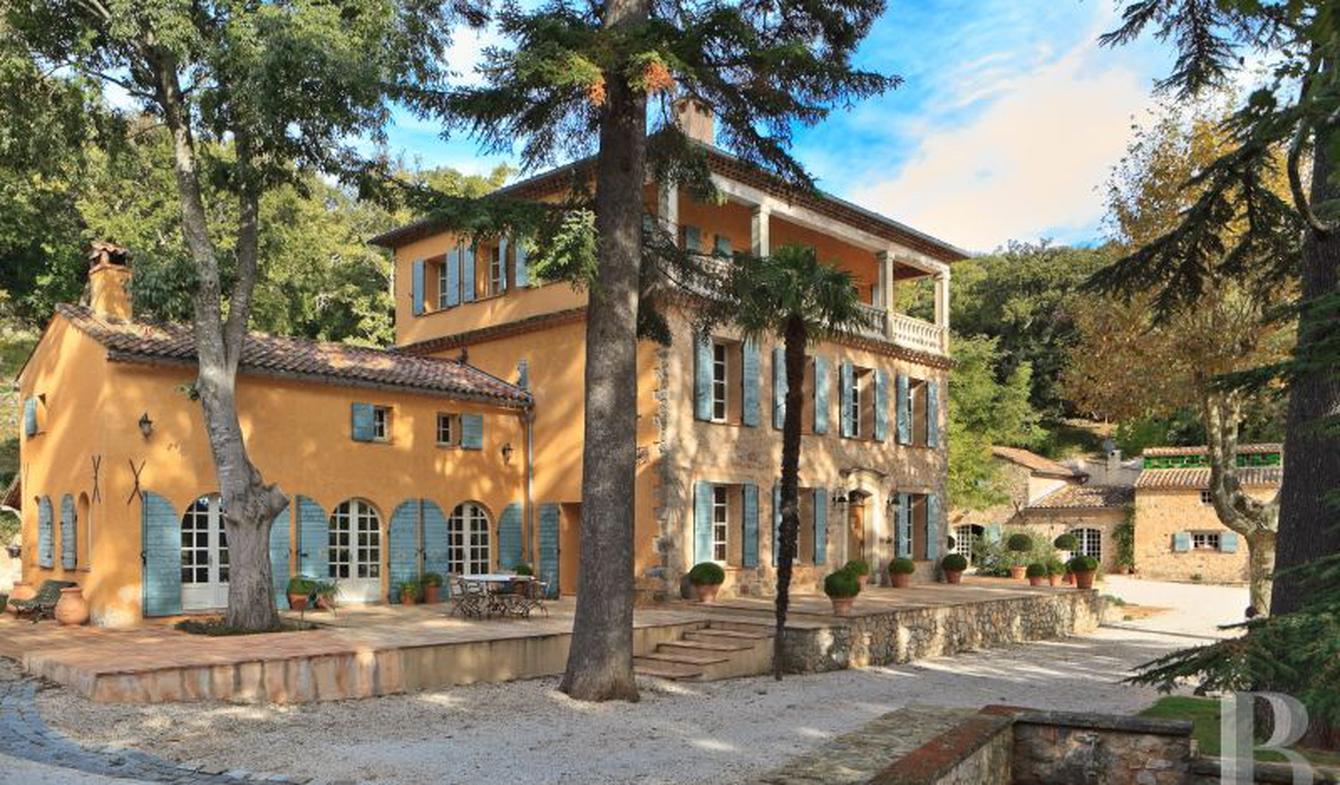 An estate with a sea view, a 19th century Bastide house, its chapel and its guest house surrounded by its land 30 minutes from the Var coast.35 minutes from Toulon-Hyères airport, the sea and a TGV train station, 15 minutes from the motorway and 10 minutes from a village with local shops. In a peaceful, unspoilt setting with a distant view of the sea and the islands of Port-Cros, Porquerolles and Levant.A narrow road, passing through fig orchards and woods, leads to the property's entrance gates. The driveway, bordered on one side by lavender bushes, leads to the traditional Bastide house which was built in 1848. It stands proudly looking down on a large lawn and an old ornamental pool, stretching out longwise in the shade of a magnificent cedar tree. The nearby terraces have an unobstructed view over the Mediterranean Sea. The main building, backing on to a wooded hillside, is surrounded by a chapel awaiting renovation and miscellaneous outbuildings, including a studio flat, a caretaker's cottage and a 250 m² garage. Also with a superb view of the islands, a vast guest house, fully renovated in a Norwegian style, stands 100 m from the Bastide. The magnificent view from the swimming pool and its pool-house, built out of sight of onlookers, takes in the natural surroundings with the sea in the distance; there are no buildings in sight. The 40 ha of land are predominantly wooded, apart from the parklands surrounding the main buildings, a helicopter could land in front of the house. Paths have been created in the wooded section so that it is possible to access vantage points with magnificent views looking down on the surrounding hills.The traditional Bastide houseThis Bastide was built facing south-east on a wooded hillside. With four windows on the upper floors and an arched door on the ground floor, the first two levels of its facade feature exposed stone, whilst the second floor has yellow ochre rendering. The top floor terrace, bordered by balusters, provides a superb view, dominated by the sea. Slightly set back on the north side is an adjoining, 2-storey building with three openings on the ground floor and two bull's eye windows on the first floor. A small square dovecote stands in the corner formed by the two buildings. Its upper openings are framed with yellow and green glazed tiles. Another building, with three semi-circular arched French windows, has been added to the south side.Ground floorThe main entrance doorway with its old door is set in the south-east facade. It opens into a vestibule, the floor tiles of which have inlaid decoration. The main marble stairway is at the end of this hallway. The south side comprises two L-shaped lounges, each with a fireplace. Both rooms have exposed beams and joists forming French ceilings. The floors have old terracotta tiles or parquet flooring and the French windows open directly on to the terrace. On the other side of the hall is a study, under which a cellar has been hewn, and a toilet. A library acts as a link between the lounges and the dining room with exposed beams and terracotta floor tiles. It adjoins a large, semi-professional kitchen that, in turn, opens on to a terrace at the back of the house.First floorThis floor includes 2 bedrooms and a shower room, with a sea view through bull's eye windows, in the wing above the dining room. They are reached via a spiral stairway. The main stairway leads up to a toilet on a half-floor and to another on the first floor landing. The latter provides access to four bedrooms, two of which have a shower room with a toilet, one has a bathroom with a bath, a shower and a toilet, and one is a single bedroom. An attic could be converted into two more bedrooms. There is parquet flooring throughout.Second floorThis level is completely taken up by a master suite, with ...

Listings similar to this bastide, Hyeres (83)

Site out of norms and privileged on one of the points of the peninsula of Giens. In the background a panorama of the sea and the island of Redonne in a classified and protected site....

Villa with pool and terrace Hyeres (83)

A breathtaking panorama over the little Ribaud and the big Ribaud south of the Presqu'île de Giens with Porquerolles in the background. This breathtaking view villa is located in a...

NEW HYÈRES PATTE BLANCHE 1st Brand OFF-Market in Real Estate. To Advertise without revealing yourself and Selling without being Seen. To access this offer, you must contact the agent....

Waterfront property in Giens … This approximately 1500m² property is located in Giens in a private domain, close to the sea. Access to the sea and its coves with turquoise waters is...

By AGENCE DU REGARD