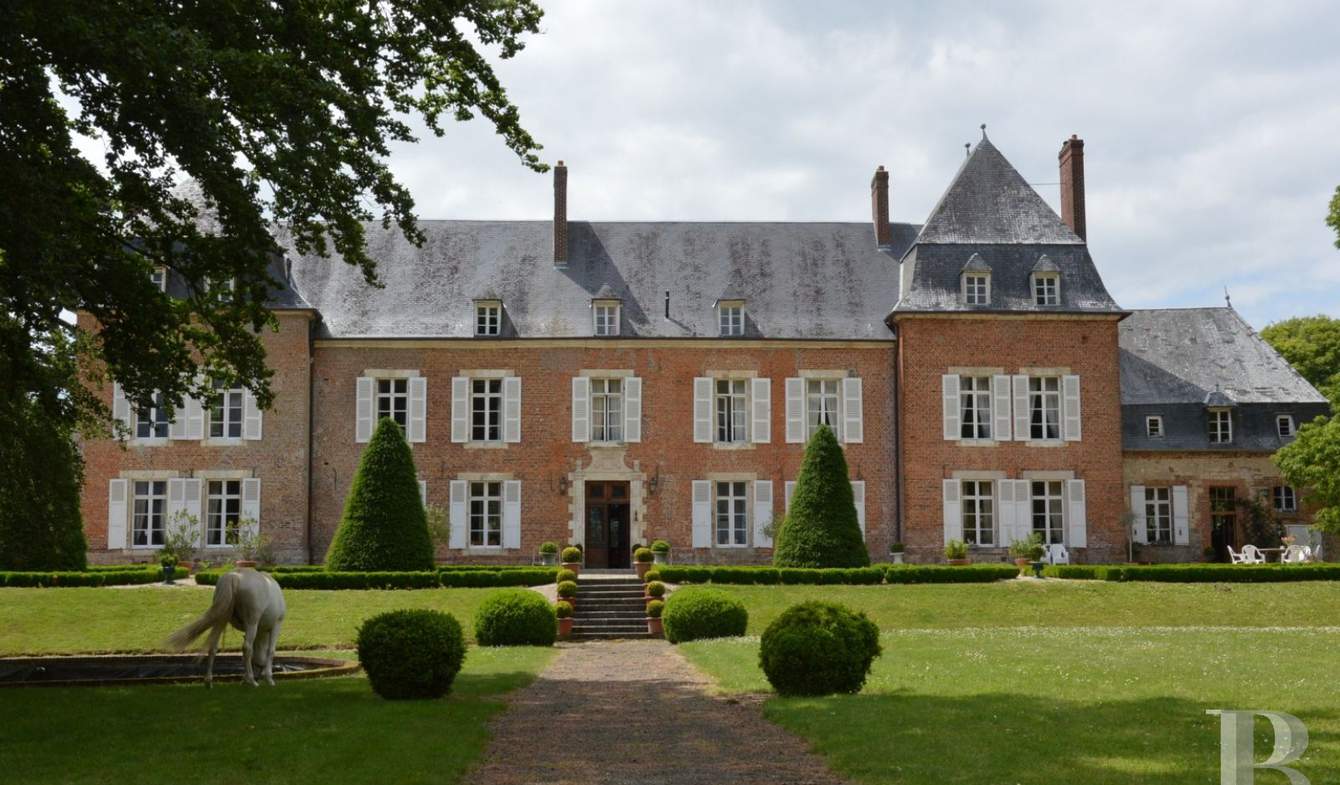 A listed, elegant 18th century chateau, with its outstanding garden, 2½ hours from Paris in the Hauts-de-France region.This chateau, 1¾ hours from Lille, 2¼ hours from Brussels and Calais as well as 3 hours from Luxembourg, is in a natural region, featuring valleys where woods, orchards and pastureland leave little room for crops. It contrasts with the many monotonous, rolling, limestone hills of the neighbouring regions. Springs abound, rivers crisscross the land in every direction and the quantity of running water explains the beauty of the forest cover.The region, like a little Normandy set between those areas in northern France renowned for their Champagne and beer, produces cider.This property is in a dominant position on the outskirts of a little village with less than 300 inhabitants.This estate, totally enclosed by walls and fencing, is accessed via wrought iron gates. The chateau is preceded by a main courtyard, closed on one side by outbuildings. The parklands are at the back.Although there are no direct neighbours, this property is not isolated.The chateauThis chateau is a superb brick and stone building, topped with steep slate roofs. Its construction began in 1780, on the site of an old medieval fortress, and was completed in 1782.It comprises a 2-storey building, flanked at each of its ends by two taller, slightly projecting pavilions, with roofs featuring breaks and roof dormers. It is extended on the left-hand side by a small, 2-storey building. The openings alone are enough to make the composition of this chateau sober and harmonious. They are identical on the rear facade, facing the parklands.The double, oak wood, glazed doors, in the centre of the building, are topped with an inflected pediment, bearing the coat-of-arms of the commissioning lord.Ground floorThe front entrance opens into the main central hall. Paved with polished stone inlaid with black marble decoration, it is extended to the end on the right-hand side by a bright corridor, simply decorated with panelling. The vestibule provides access to a toilet, with a wash-hand basin, under the stairway and a small lounge which has a 19th century marble fireplace and herringbone pattern, oak wood parquet flooring, just like the dining room following it which has an 18th century marble fireplace. Both rooms are muted and cosy, protected from the direct light flooding into the corridor along the south facade.These rooms precede a kitchen, which takes up the entire small pavilion. The main room in the chateau, it stands over a vaulted cellar, spanning the same floor surface area, and has a small door, partially glazed with small panes, leading outside. Its 52 m², quite simply representing all the charm and flavour of country houses, feature unevenly laid, odd terracotta floor tiles, a brick fireplace and exposed beams.A large 48 m² lounge, on the other side of the main hall, has Versailles pattern parquet flooring and an attractive black marble fireplace, decorated with floral motifs. Extremely bright, it opens into a study, with terracotta floor tiles and exposed ceiling beams, on one side and, on the other, into a library which also features heavy, exposed ceiling beams. The marble fireplace, topped with its trumeau, provides it however with the gracious appeal and fantasy of its decor against a background of polished oak wood panelling. The flooring is laid in a strip pattern.First floorDisplaying its arabesques, the oak wood stairway goes up to the middle of a large corridor which provides access on either side to seven bedrooms, a bathroom, three shower rooms and a linen room.The size of the bedrooms varies from 12.5 to 58 m². Almost all of them have a 19th century marble fireplace. One bedroom has its own shower room, whilst two others are set on either side of a bathroom. A third …

Listings similar to this castle, Puisieux-et-Clanlieu

Built in 1850 and enlarged in 1895, this chateau replaces a 17th century residence whose ruins are still in the park. Situated in a quiet environment, it is south-facing and overlooks...

This castle is undoubtedly a perfect tool for seminaries, weddings and...

A 16th century, country mansion house and its gardens near to Villers-Cotterêts and 90 km from Paris. In the heart of Picardy, on the edge of Retz forest, on the heights of an... 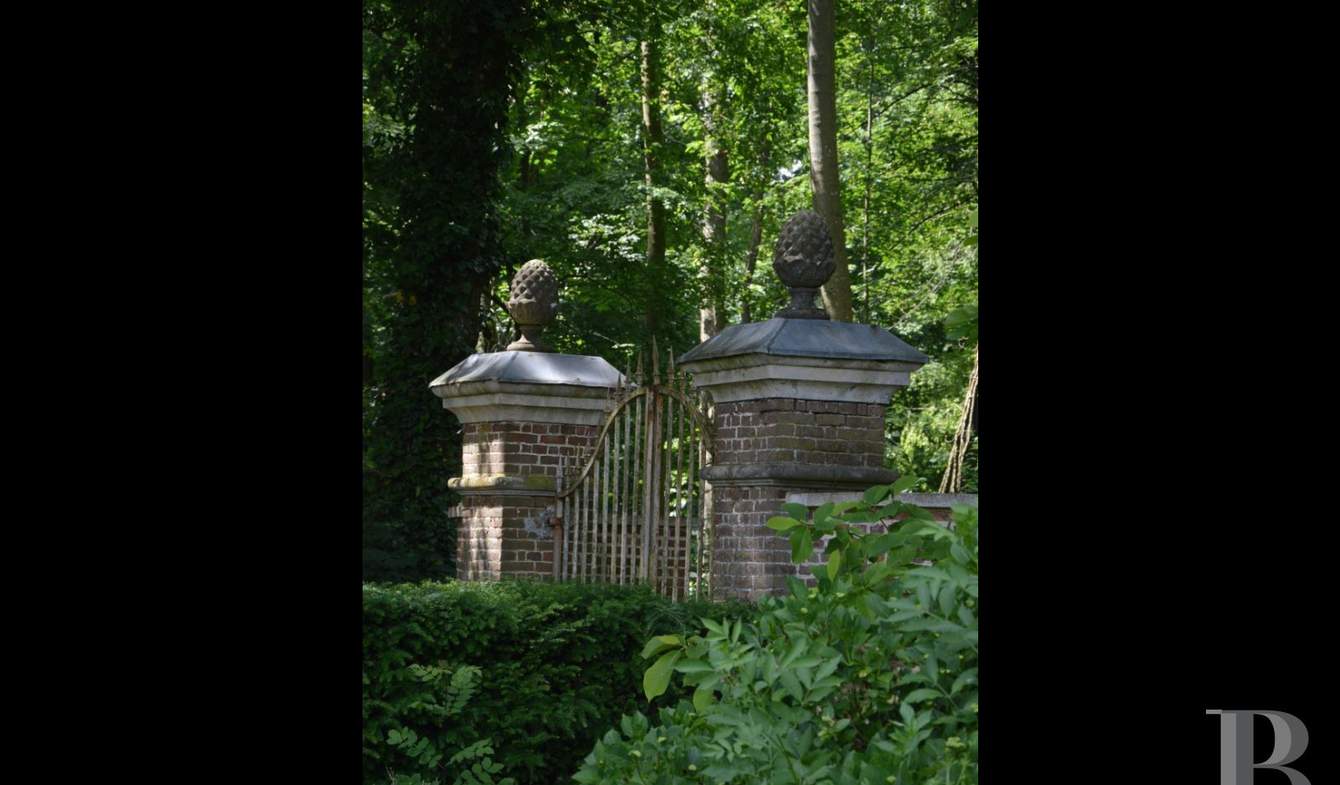