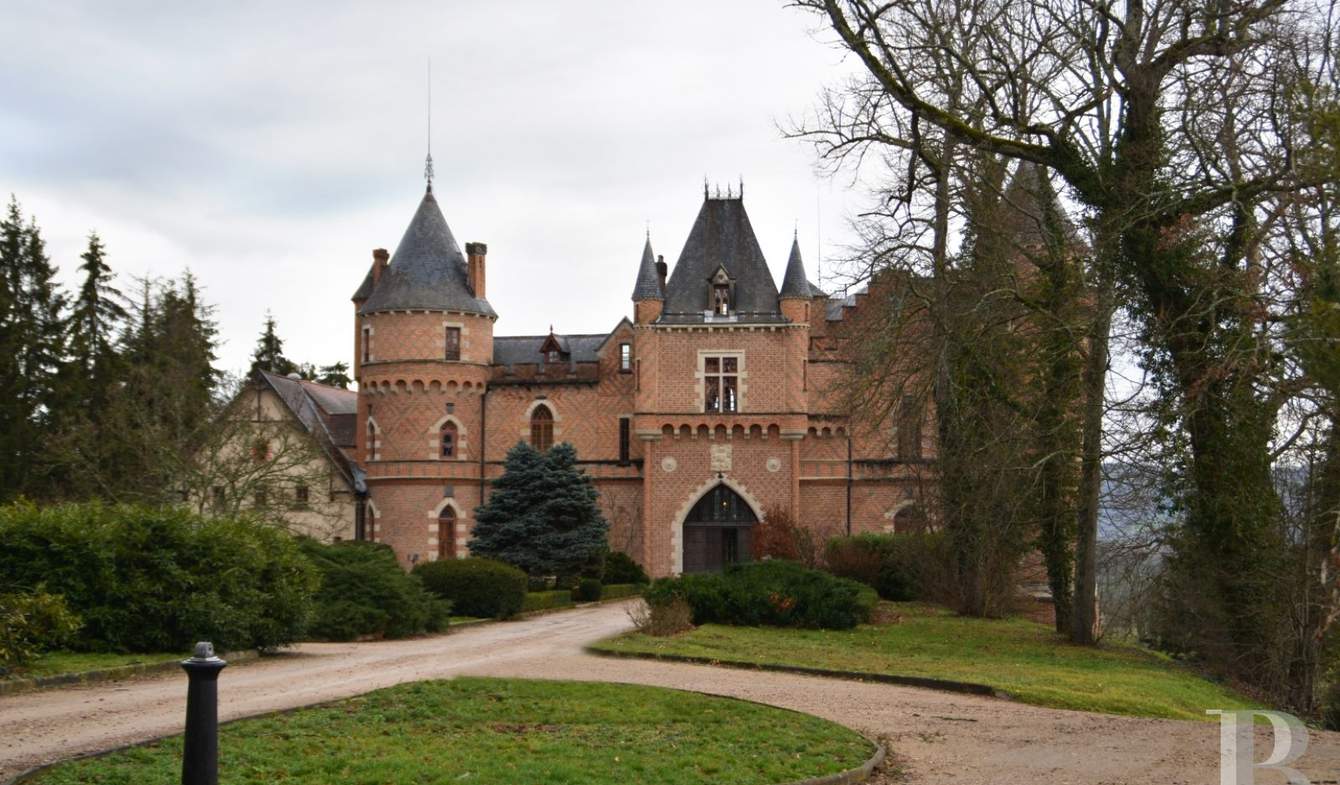 A listed, 19th century castle-hotel, with 25 hectares of parklands and forest, near to Vichy.15 km from Vichy train station, with 2½-hour links to Paris, and motorway slip roads. In a dominant position, backing on to a forest to the west and looking out over an extensive view over the Allier Valley to the east and south.Clermont-Ferrand and its airport are 40 km away. The river Allier is 2 km away.This castle, on the edge of a forest, appears to be right out of a fairy story. Preceded by a French formal garden, its neo-gothic style facade takes visitors back to the fantasy world of Victor-Hugo or the novels of Walter-Scott. The flower-filled courtyard is flanked by two wings of the castle and opens on to a terrace, looking out over the Allier Valley and the Forez hills. A swimming pool and a sun terrace have been installed next to medieval vestiges of a primitive castle. The south wing ends with a 16th century Renaissance facade, featuring Volvic stone. The north wing has a wooden gallery leading to the first-floor bedrooms. Three lakes on the edge of the woods mirror their setting.The castleIts facade, preceded by a French formal garden, reflects the neo-gothic style. The brick walls feature large windows, with white stone surrounds, on two levels. Two round towers flank the facade, leaving a central square tower as the entrance. Steep roofs covered with slate are topped with crests and weather vanes.Ground floorThe entrance porch opens into a vestibule, laid out at the foot of a large, interior stairway, and a corridor, going through to the courtyard. On one side, a first dining room and a circular lounge at the bottom of one of the round towers; on the other, the south wing, following an immense gothic fireplace, comprises a fully panelled lounge-bar which provides access to a large dining room, a vast, 85 m² room where wide windows are adorned with stained glass depicting the coats-of-arms of the Orleans family and that of Adelaide, sister of King Louis-Philippe, who was responsible for the construction. French ceiling, a fireplace, parquet flooring and panelling. In the north wing, two suites are ideal for disabled persons. The extremely functional kitchens meet current day standards and include a cold room, a linen room, a staff dining room and offices.Garden levelThe three wings flank a flower-filled courtyard, enhanced with a fountain. This courtyard opens via a terrace, spanning approx. 300 m², on to a wide vista, taking in the Allier Valley and the Forez hills. A swimming pool and a sun terrace have been installed next to medieval vestiges of a primitive castle, constructed by an old Knights Templar. The south wing ends with a Renaissance style facade. Featuring dressed and sculpted Volvic stone, it exudes a rare elegance. A canvas marquee extends the large room out towards the terrace and a pergola, spanning approx. 80 m².First floorFour large bedrooms, two of which form suites housed on the upper floors of each of the two towers. Another twelve bedrooms take up the north and south wings. The bedrooms in the north wing are reached via an outside, wooden stairway, forming a gallery.The parklandsA flight of steps lead down below the terrace to a heliport. 22 hectares of parklands, 9 ha of which are wooded, with their three lakes, are an invitation to take a walk or work out on the driving range, under the watchful eye of the castle towers. A private carpark, with 90 spaces, is laid out in front of the gardens.OutbuildingHorse loose boxes. A barn, a garage and a woodshed.

Listings similar to this castle, Vichy

Property including 2 châteaux on 80ha of wood, meadow, pond and golf This property is a rare place, offering a late nineteenth renovated chateau comprising an entrance decorated with...

Lovely 15th-18th century château on 4,5 ha of park In a green setting, 3mn from an all shops village and only 15mn from A71, this lovely defensive Bourbonnais style château, dating from...

Ref.3738 : French chateau for sale in region of Bourbonnais. The property is located in the Bourbonnais region, in the Saint-Pourçain-Sur-Sioule area, 17 km from the highway exit. The... 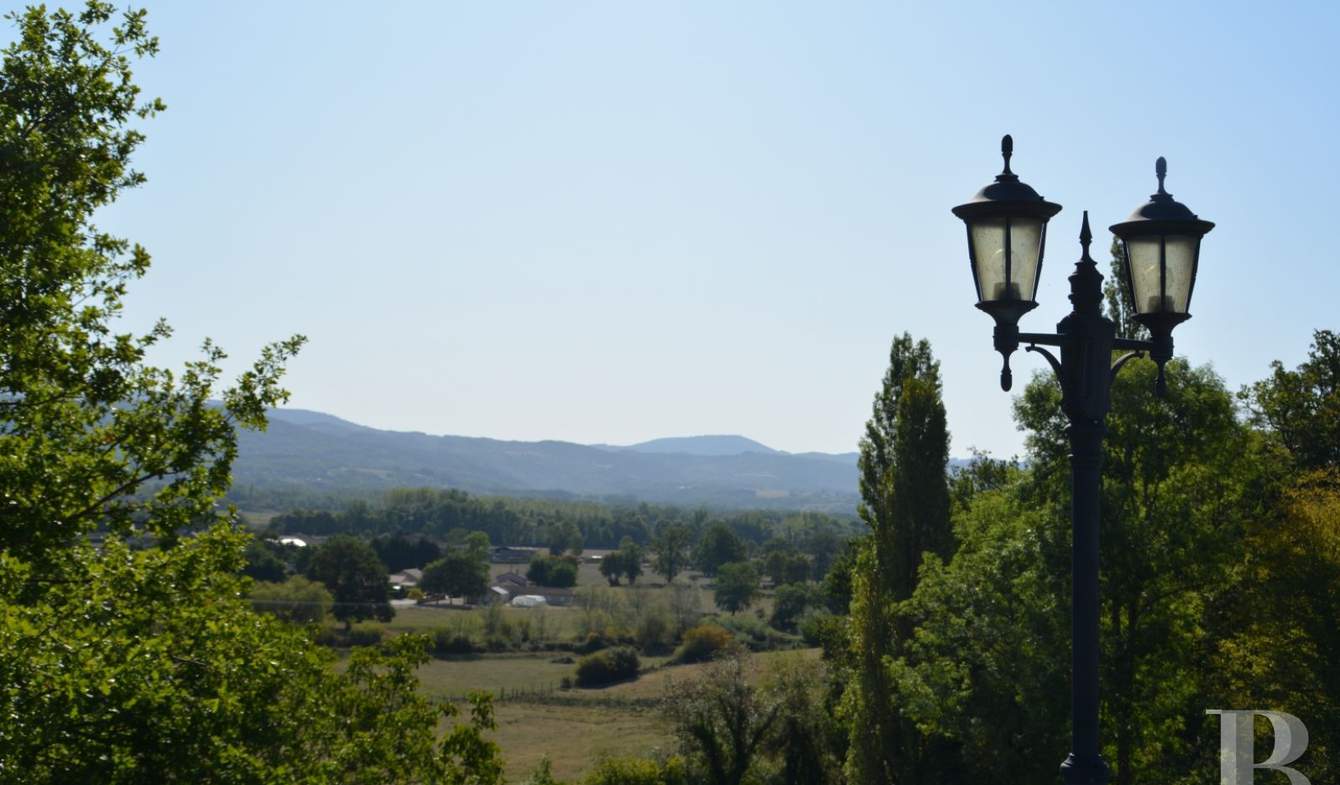