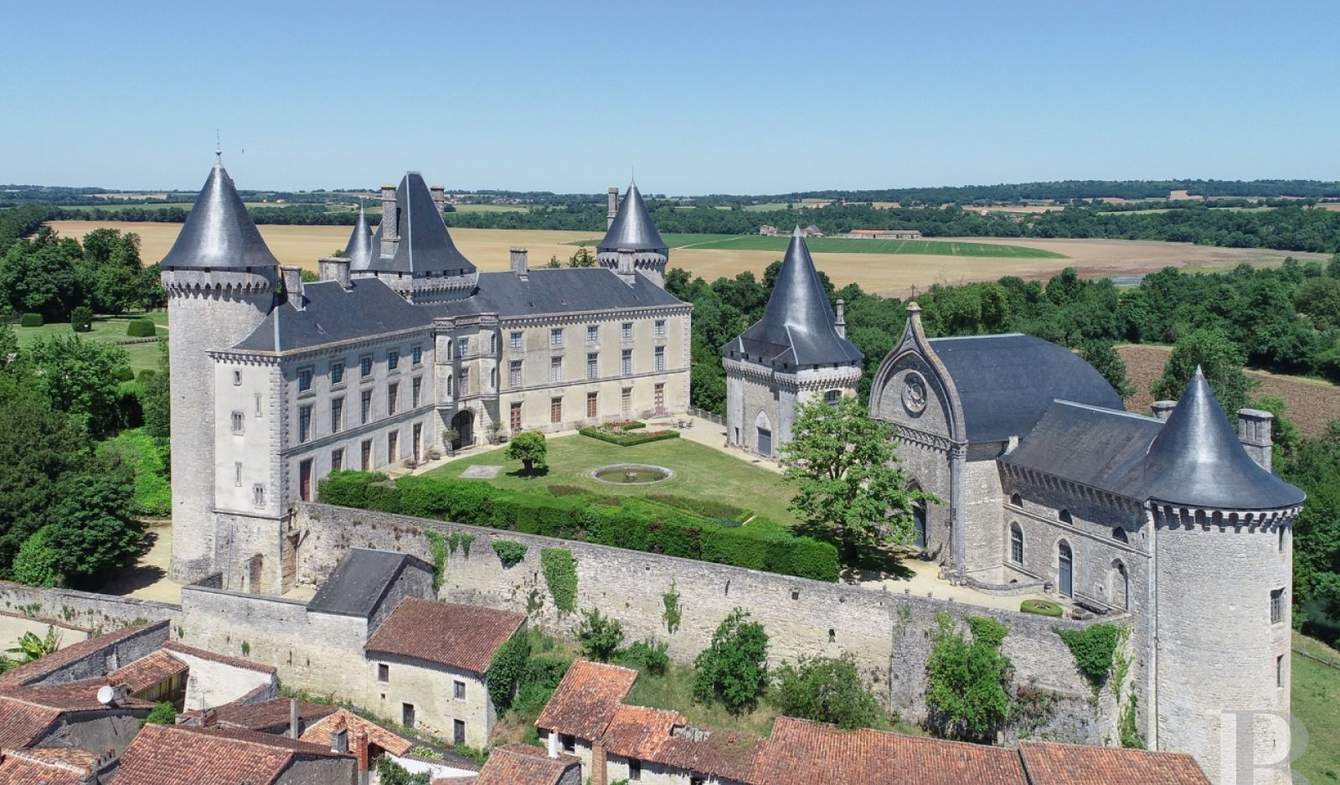 An eminent listed castle in the Angoumois region, owned by La-Rochefoucauld family for a thousand years.Where the Poitou region meets the Charente department, in the middle of hilly landscapes, made of plains and woods, the castle is located in a village along the river Charente.The latter has preserved all its charm, authenticity and liveliness. The town of Angoulême and its famous comic book festival are just thirty minutes away. A train station located fifteen minutes from the village links it to Poitiers and the LGV line (1 hour 15 mins to Paris and 2 hours 30 to Roissy-Charles-de-Gaulle airport) or to Angoulême where there are TGV trains to Paris in 2 hours.The castle, part of the Rochefoucauld family fiefdom for a thousand years is concealed from the visitor’s eye.Passed the automatic entrance gates, a long tree-lined bridle path with park and woods on one side and outbuildings on the other, turns towards the end to reveal the impressive façade. The estate stretches the length of the village or perhaps the reverse. Behind the castle, the library, chapel and estate manager’s lodge are laid out around the main courtyard in a triangle making an elegant and refined ensemble. This part of the estate overlooks the village and the river, offering a rich variety of perspectives.The castleVery early on the castle became the La Rochefoucauld family residence leaving behind the sumptuous official receptions. The family’s predominant place in the history of France is also linked to the relationships that it created with other countries such as the United States and notably Jefferson, great friend of François-de-La-Rochefoucauld, or again, when in 1929, Rockfeller purchased the “Chasse à la licorne” or Unicorn tapestries now exhibited in New York’s Cloisters Museum. These links and many others form the originality and the force of a property such as this one. The estate is V shaped and includes a central pavilion flanked by two towers linking the two wings and closed by another very impressive tower. Spanning three levels, the former kitchens and stunning 5m high ceiling are in the basement. The first stone was laid in 11th century and the towers, machicolation and perimeter walls all date back to that period and are a reminder of its defensive role.In 15th century the castle underwent extensive restoration after the numerous one hundred years war sieges.In 16th century, François II de la Rochefoucauld and his wife Anne de Polignac, together with King François I, bring Italian workers from the Italian Wars era to transform the castle into an Italian Renaissance style castle. However, it is the Duchess of Anville who in 18th century converts the castle into apartments, incorporating large windows into both facades illuminating the castle beautifully. In 19th century, after the destruction of the Revolution, much restoration work was carried out.The facade is stone on the park side. The hip and candlesnuffer roofs are all slate and were replaced in 2001 and 2013. Once through the large wood gateway, an archway, topped with floral mosaic and closed by an atrium offers a view of the main courtyard and medieval style garden. The facade on this side is lime rendered. The windows have been changed progressively since 2003. Central heating has been installed in just part of the castle, including the kitchen, small lounge and toilet on the ground floor; a bedroom with ensuite bathroom on the first floor and above it a second bedroom with its ensuite bathroom on the second floor.Ground floorThe entrance archway with its mosaic floor tiles leads, on one side, to a small lounge that opens into a through dining room featuring a beautiful coffered ceiling and kitchen that was moved up to this floor in 19th century. Behind the dining room is one of the four staircases and a …

Listings similar to this castle, Angouleme

30min south of Angouleme, in the heart of a property of about 90 hectares, beautiful castle, Historical Monument, of the XVIIth century with its many outbuildings surrounded by moats....

CHARENTES (16): Located on the outskirts a short distance from Angoulême. Spectacular and magnificent as well as a very rare 13th century tower castle, owned by one of the most noble...

Situated at the gateway to Angoulême, this exceptional property of 122 ha (305 acres) enjoys a wonderful and quiet setting. The general configuration includes a magnificent 17th and 18th...

A listed castle and its fenced estate, spanning some 80 ha, with parklands, woods, farmland and a large lake in the area around Angoulême in Charente. Not far from... 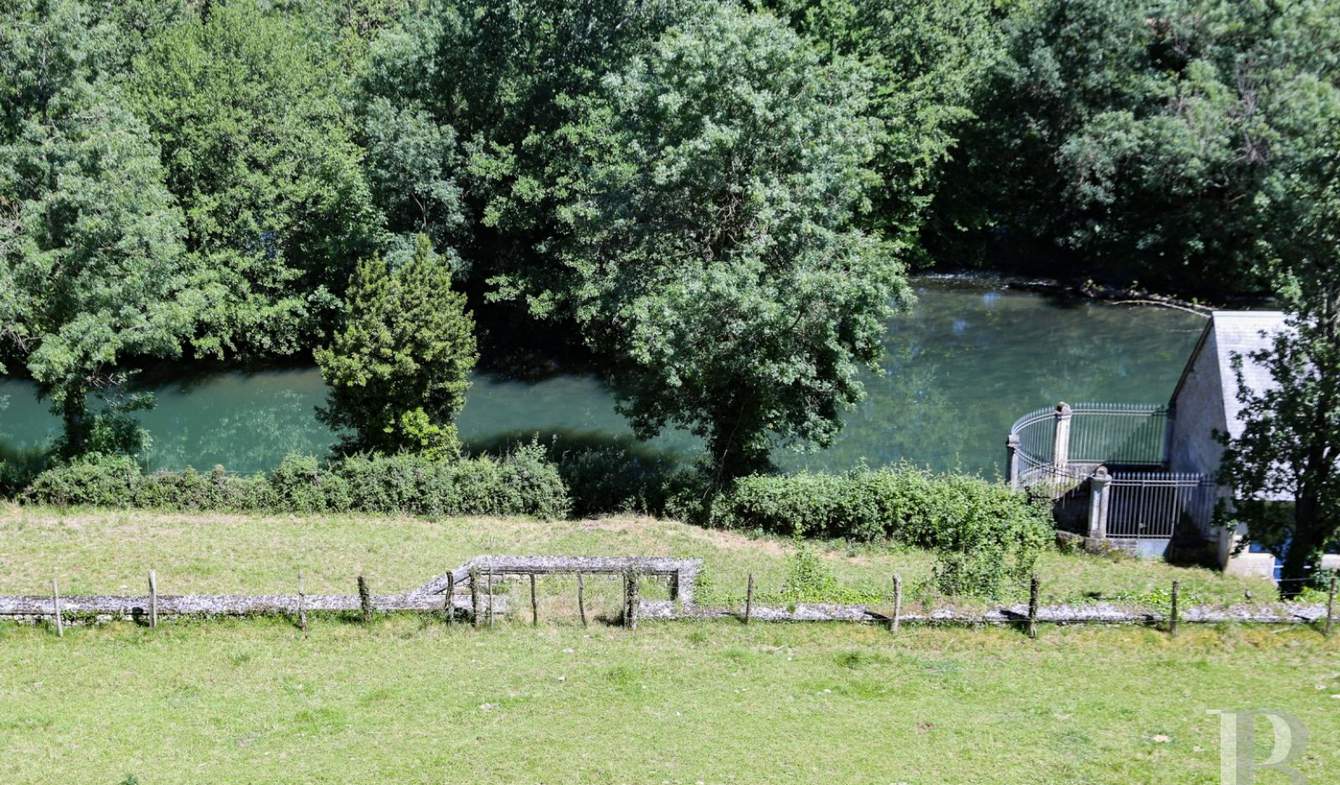