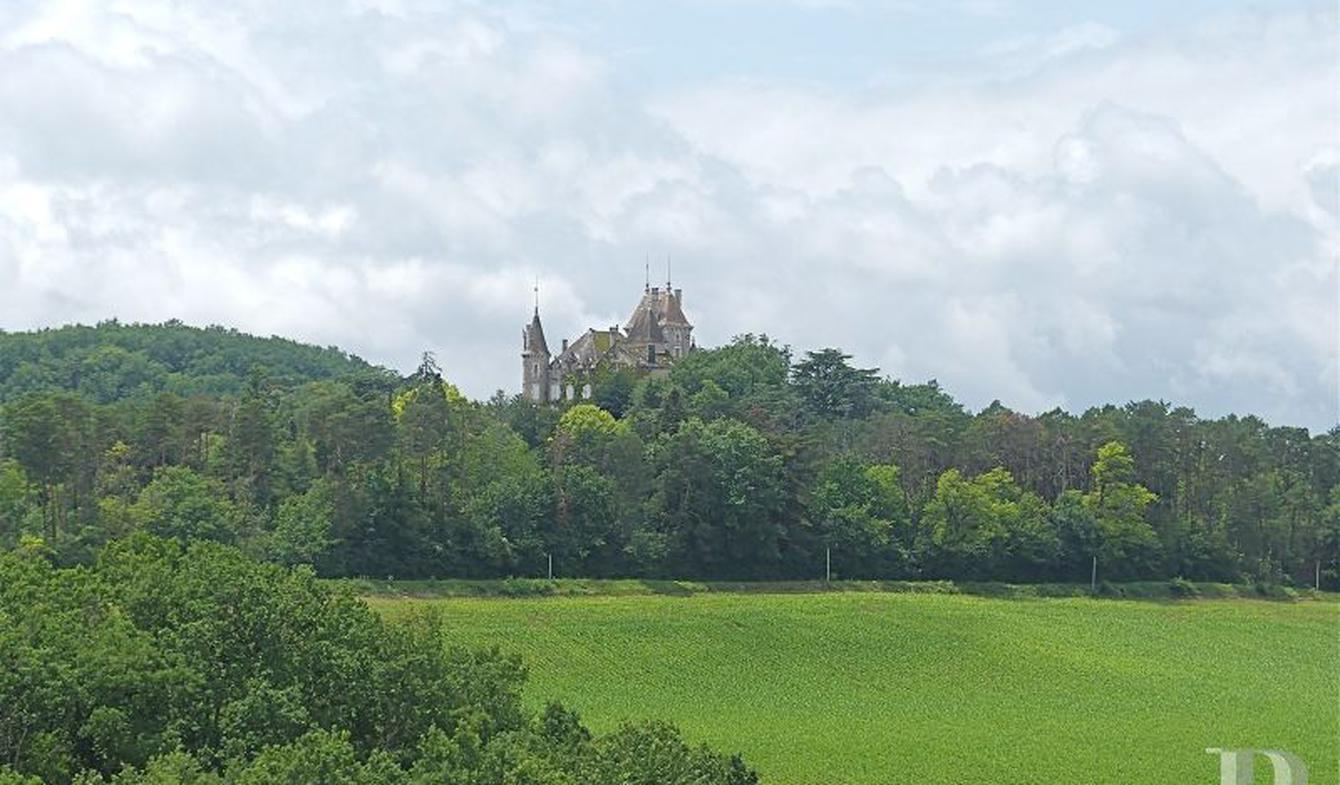 Between Fumel and Villeneuve-sur-Lot, a 19th century folly with panoramic view andwonderful 10 ha parklands planted with century-old trees.In the heart of the South-West region, close to the towns of Fumel, Villeneuve-sur-Lot and Agen, whose airport links it to Paris in 1 hour 25 mins. By TGV, Toulouse and Bordeaux are just one hour away and Paris four. A gently undulating region alternating a coloured mosaic of grasslands, woods and cultivated landscapes where an outstanding architectural heritage is made up of a number of medieval fortified towns, hilltop villages, castles, abbeys and mills. Close to two towns, one of which was once an important fortified city and today home to artists and craftsmen, where it feels good to stroll through cobbled streets and their beautiful facades, and stop off to eat something at the restaurants serving local produce or just simply enjoy the view. The river Lot located downhill is navigable making it possible to visit the region in a different way.The estate stretches over approx. ten hectares, enclosed by quickset hedges, features outstanding parklands with a variety of century-old trees. Through the gates marking the entrance, a long shady driveway goes all the way round the property at the foot of the enclosure wall. There are other parkways through the parklands giving the opportunity to see everything they have to offer. There is a wide selection of trees and shrubs: pine, cedar, redwood, Lambert cypresses, Judas trees, holm and cork oaks, magnolias, ginkgos, palm trees, lime trees, choisya shrubs, plane trees, among many others. There are also vast areas of grassland, an orchard as well as a few grapevines and some ancient remains including a former chapel and a pavilion. Benches placed here and there let you contemplate the beautiful views all around. An old tennis court located in the north-east of the estate awaits renovation. To the north-west, on a lower level, there is a former groom's house spanning two storeys with a flat-tile roof. The property comprises three main buildings forming a U shape and a large covered shelter.The main entrance to the chateau is located to the south-east, behind high wrought-iron gates and a beautiful symmetrical staircase giving access to the raised ground floor. The building is perched on a knoll and it would appear to have been occupied as early as 15th century.Its current architecture dates back to the end of 19th century, at a time when it took on forms of folly - luxurious holiday residence - completely leaving behind the former manor house that once stood there.The chateauBuilt of random limestone and tuff, the chateau is raised above a basement level occupied by a series of rooms and cellars mainly vaulted where a well is also to be found. It comprises a rectangular-shaped main building spanning three storeys (excluding attic space) and features high gable-fronted lucarnes. It is covered by a flat-tile hip roof. The south-facing facade is flanked by two round towers and has a big terrace from where one may admire the unobstructed view. A tall rectangular tower and turret are situated to the north west. It houses the main wooden spiral staircase with three successive flights of steps and landings. To the north, the main building is flanked by a second building, intended originally for the servants, with a main-slope, open-gable roof. There is a secondary stone spiral staircase here but also a lift leading to the three main floors. It also has a terrace, a smaller one and a quarter turning stone stairway leading to a second entrance on the same level as the former groom's house. The rooms on the inside have preserved their authenticity and can be lived in as they are. The surface area of approx. 827 m2 (excluding cellars and attic) is set out as large and mainly luminous rooms, the decoration of ...

Listings similar to this castle, Saint-Sylvestre-sur-Lot

This exceptional chateau is set on 3 Hectares in the middle of the countryside, but is only a short drive from a bustling town with all amenities. It is south-facing, and this, combined...

Avezan Castle is a 45-minute drive from the town of Agen. It is the perfect example of a Gascon castle. Its architecture makes all the elegance of this solid property with squat...

In the heart of Lot-et-Garonne, exceptional domain of the 19th century, completely renovated with care including: a château developing approximately 700 m2 on 3 levels in 17 main rooms,...

19th century château, with outbuildings overlooking 3ha of land. South Agen, close to A62 (Bordeaux-Toulouse) between Gers and Lot et Garonne , on the outskirts of an all shops village,... 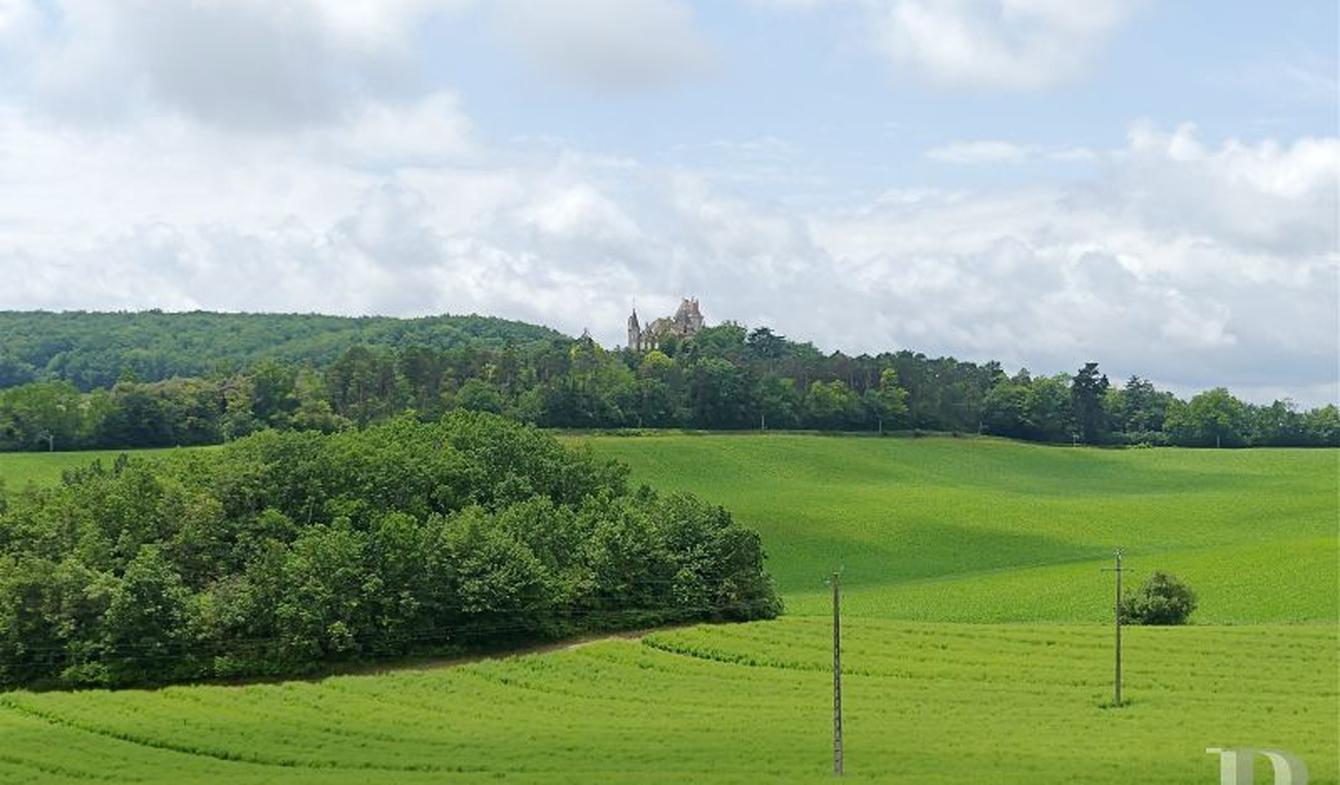