Near to Agen in the midst of the south-west of France, overlooking the river Garonne, an impressive, listed, 18th century chateau set in some 4 ha of land.This residence is set on a hillside, with a panoramic view over the valley marking the boundary with Gascony, which is visible in the distance. Safe from any flooding of the Garonne, it represents the archetype of local stately homes in the 18th century.The town of Agen and slip roads for the Bordeaux-Toulouse motorway are 20 km away. Paris is now 190 minutes away via TGV train or 80 minutes away via Paris-Orly airport.The railway line, below, does not disturb the tranquillity of the premises.A forest path leads up through seedling forests and oak woods to the entrance courtyard which dominates the valley.A vast esplanade separates the walled chateau from the farm outbuildings and the dovecote.The building stands above the plain, looking down on to a terrace, featuring robust retaining walls.This chateau, reconstructed in the first half of the 18th century, was raised in the 1840’s.The parklands and gardens are terraced.The chateauA wide, vaulted passageway opens into a large inner courtyard formed by the main building and its two wings set at right angles. Outbuildings and the caretakers’ accommodation enclose the courtyard.The facade facing the courtyard features a classical layout as regards openings: a central French window and two windows on either side, with five windows on the first floor.The quarry stone block walls, like those of the outbuildings, are covered with an old, sand and lime rendering, displaying the patina of time.Ground floorA wide vestibule goes through the chateau in a north-south direction. Extremely bright with two French windows, it is laid with grey and white floor tiles. As of the entrance door, two opposing gallery-corridors provide access to the ground floor rooms, all facing south.The embrasure of the lounge door is coffered and the doors, like all the others in the house, adorned with carved motifs. A grey marble fireplace is topped with a Directoire-style trumeau. This type of refined decor can be seen above most of the fireplaces. In the west corner of the lounge, a door opening into a little library also communicates with the vestibule, the walls of which are lined with glazed shelves, forming a curved alcove at the end.A room, adjoining but not communicating with the lounge, is laid out as a billiards’ room. Wide strip parquet flooring, a south-facing window and a grey marble fireplace, topped with a Directoire-style trumeau.A bedroom in the south-east corner receives light from these two directions. It communicates with a bathroom, shared with two small bedrooms.The same wide corridor, with wooden flooring, a plaster ceiling and two windows overlooking the inner courtyard, leads from the through gallery to the west section of the house: a lounge, a dining room, a bedroom with a shower room and the kitchens.The large lounge is completely lined with 18th century, white panelling. Versailles pattern parquet flooring, two south-facing windows opening on to the terrace. It also communicates with the gallery and the dining room. The double doors feature a tympanum composed of painted trumeaux, depicting angels playing musical instruments. A wide, grey marble fireplace, its mantel supported by columns featuring sculpted scrolls. A plastered, beamed ceiling with a central rose.The dining room, with herringbone pattern parquet flooring, is lined with wainscoting; a grey marble fireplace, topped with a Directoire-style trumeau. On the north side, the wall is fully lined with natural wood panelling, the doors of which conceal cupboards intended for crockery. Said dining room opens on to the end of the gallery-corridor, housing the stairway. A last room, a bedroom communicating …

19th century château, with outbuildings overlooking 3ha of land. South Agen, close to A62 (Bordeaux-Toulouse) between Gers and Lot et Garonne , on the outskirts of an all shops village,...

A Medieval & 18th century building set in 10 ha near to Agen on the heights of Lot-et-Garonne. Ten or so kilometres from Agen, equidistant from Bordeaux and Toulouse. The magnificent...

Between Fumel and Villeneuve-sur-Lot, a 19th century folly with panoramic view and wonderful 10 ha parklands planted with century-old trees. In the heart of the South-West region,... 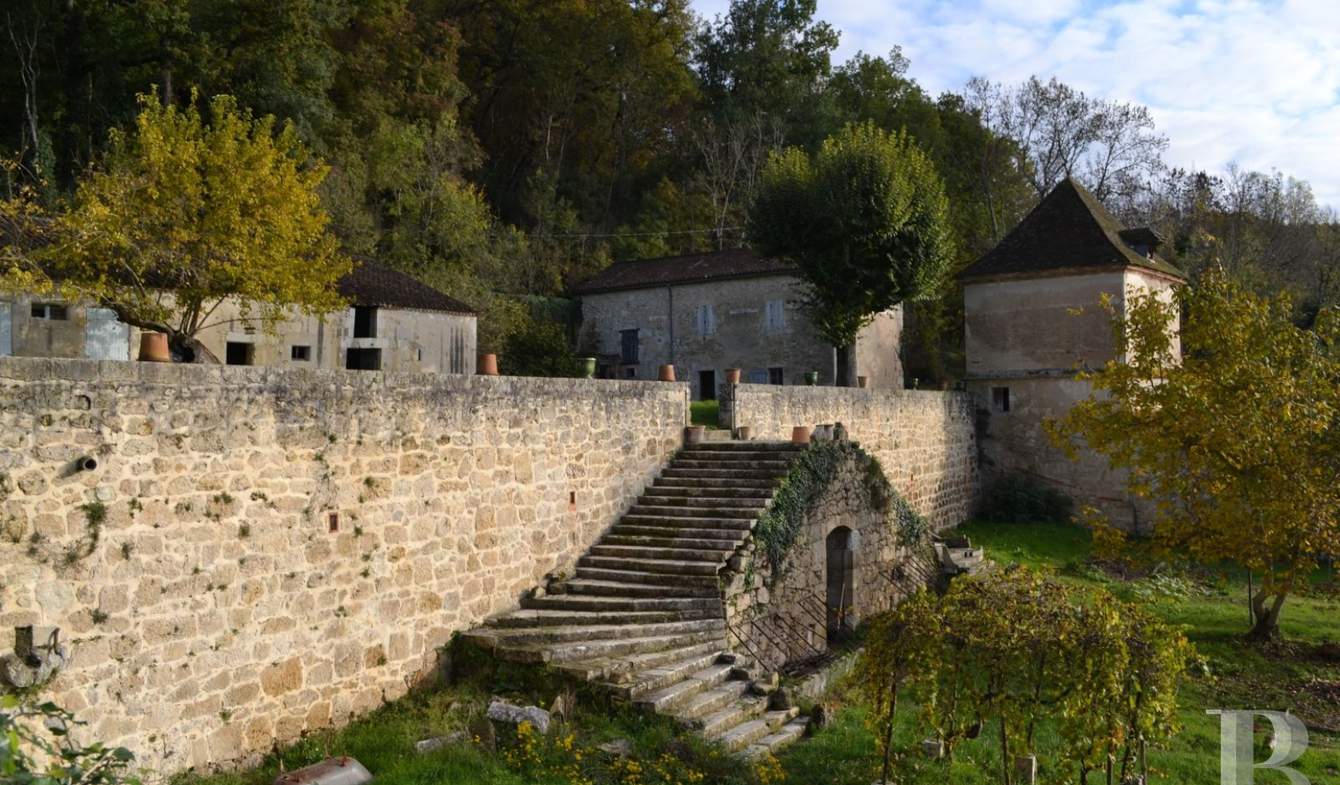