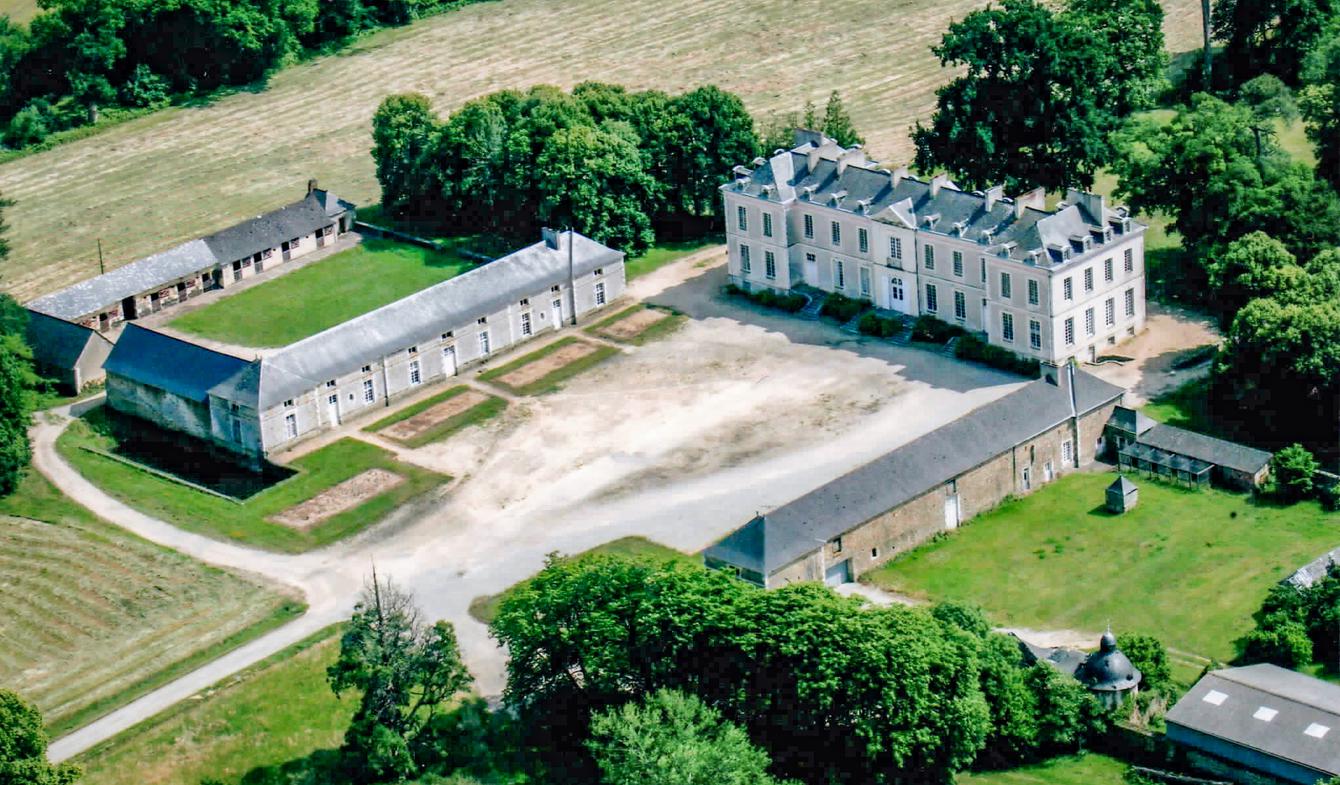 ~- SUMPTUOUS CASTLE NEOCLASSIQUE BUILT IN 1786 – GREAT AND RARE DECORATIONS for INDOOR - IN HIS STATE Of ORIGIN AND HOMOGENEOUS – LARGE OUTBUILDINGS – 161 ACRES – SEGRE, ANJOU, MAINE ET LOIRE, COUNTRY OF THE LOIRE Remained since the beginning in the same family, this castle is a neoclassical interest outstanding documentary. In an environment of high quality, in the middle of its 161 acres, at the end of a perspective of 350 meters long and 50 meters wide, it presents a particularly glitzy Overlooking the vast and majestic course of honour, the neoclassical facade has a front central body to chainages to bosses and partition walls, opened by a large double door, which is accessed by a large staircase with two flights, under the big pediment marked with the coat of arms of alliance, on a cartouche surrounded by two lions, under marquis crown. And, the central core continues on with three spans and two pavilions of the corners of the two bays by strongly projecting under roof with four sides. The ground floor, a first floor and a second floor under roof. Two staircases to the angle of each pavilion with the central body The front side park, the heart of the South, has the same organization except that the large front porch is three degrees. We find the pediment carved with a coat of arms of alliances framed by a rich decoration of lions and trophies of weapons, ordered a marquis crown Inside, the ground floor is organised around a central hall and two large staircases to the beautiful wrought-iron railings to the angle of each of the pavilions. The row of beautiful function rooms is decked out in sumptuous decorations, including a dining room adorned with two rare fountains and their basins console in pink marble and top of door in bas-reliefs representing cupids throughout the four seasons, a large living room with ornate wood panelling of exceptional quality, carved wood grooved pilasters with ionic capitals, friezes of rinceaux, medallions, friezes of positions, garlands of laurels, fireplace with grey marble inlaid sawtooth and challenges of oak leaves made of white marble. Floor Versailles. Ice at mercury Un salon rose, the pier, adorned with tracery of the foliage of the olive tree, garlands of flowers, holly, and oak, vase antique gadrooned. Fireplace in grey marble, decorated with a frieze of positions in white marble. Floor to the original decoration of chevrons and arcs of circle A chamber apparatus with a sumptuous alcove adorned with soirie, woodwork decorated with pilasters, the foliage leafy, and antique vases, marble fireplace, pier decorated with an oil on canvas of very high quality, can appear in several subjects in vogue in the Eighteenth century, Venus and Love, Eros and Thanatos, or Cupid and Psyche. Very beautiful medallions oval carved cupids throughout the four seasons gird frames oves. Trophy hunting on oak leaves carved in the woodwork large kitchen, office, several pieces of service Two large staircases with beautiful wrought iron railings adorned with curves and counter-curves On the floor a large corridor leads to ten beautiful rooms. The most decorated chimneys and piers, very nice quality ; a pier painted a vase at the antique surrounded by a garland of flower, and carved with a trophy of arms, other piers of carved and painted a vase antique, the foliage of olive trees, trophy gardeners, hunting trophies, frieze of positions, interlaced, attributes of love, cupids playing with a goat, love in the four seasons On the second floor, Attic, many rooms of services, large granaries The dependencies are in two wings on the court of honor, the architecture is very neat, marked chainages of angles, bullseye, floor in attic. A wing is home to the beautiful upholstery decorated with wood frets. Ecuries, many discounts to car, beautiful attics lit windows in attica, workshop, PANTRY, 10 horse boxes for some quite recent. Two elegant loft under the dome of the slate Almost all of the architectures and decorations of this property are original, the construction in 1784 and homogeneous in the neoclassical style Hangar d’environ 400m2 Guard house Xix of approximately 100m2 on the ground a house Beautiful garden closed Aisle of 250 metres, 50m de large, 100m of court Distribution of land - 33 acres of agricultural land leased around the castle - 12 hectares de terres agricoles free - 24 hectares de terres agricoles loués, order to bail 2021 - 92 hectares of wood En option - 35 hectares de terres agricoles free - 3 hectares of wood Castle of approximately 400m2 approximately per level on three levels plus cellars The two large wings of outbuildings, of approximately 1000m 2 approximately on the ground on two levels Barns, box to 470m2 approximately situation - 13km all shops and services - 45km de Laval, TGV station, Paris 1h30 - 70km de Angers, - 330km, 3 hours from Paris Price: 1743336 Euros fees included(dont 7, 4% to be borne by the buyer.

Listings similar to this castle, Segré (49)

AN ATYPICAL AND RARE MANOR Niche in the heart of the valley of Haut Anjou, 10 minutes from Lion d'Angers, near Angers and Nantes (TGV / airport / highway) and all amenities (schools,...

Ref.3418 : French chateau for sale near Angers. Situated in the Maine-et-Loire department, some 9mi away from the city of Angers, this ravishing château is easy accessible by motorway,...

Ref.3476: Beautiful castle for sale in Pays-de-la-Loire. The property is located in the quiet countryside of Maine-et-Loire, just 30 minutes from Angers by car and 1 hour from Nantes.... 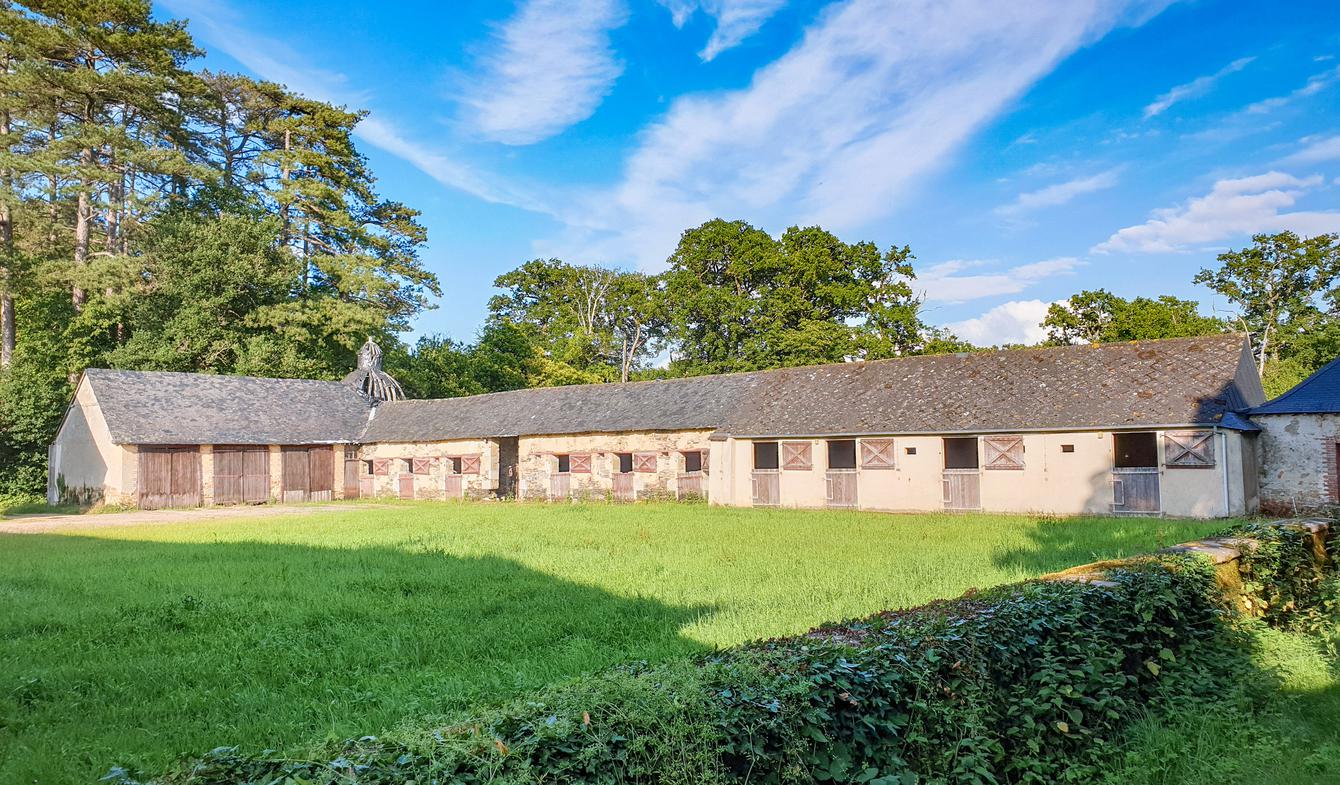