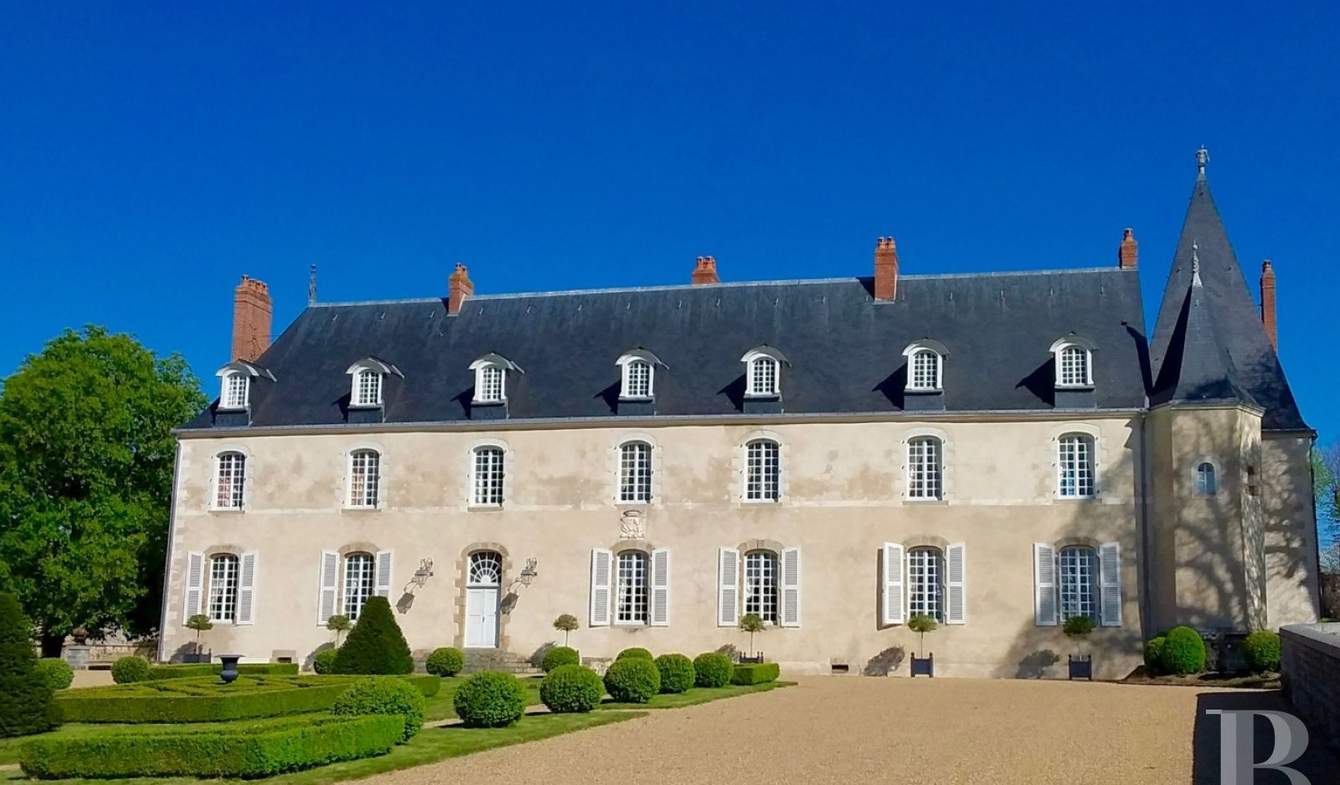 A harmonious, fully restored, listed chateau estate, spanning 15 hectares, in the Pays-de-la-Loire region.On the outskirts of a village with all main shops and amenities. Near to the town of Laval which is connected by the fast train line to Paris and to Roissy-Charles-de-Gaulle airport (ten daily return journeys respectively taking 70 and 90 minutes). Also near to a slip road for the A81 motorway which goes from Paris to Brittany’s capital (Rennes is less than an hour from Laval).A long driveway, bordered by trees and crossing the parkland’s grasslands and woods, leads from the village to the property. Entrance gates open on to a very wide courtyard, partially surrounded by a dry moat and laid out in front of the chateau’s regular, elegant facade. The outbuildings, set out around the courtyard, comprise stables, a dovecote, pigsties, a barn, a small corner pavilion, a caretaker’s cottage and, lastly, a chapel. A central parterre, displaying its original design, takes up a large section of the courtyard in front of the chateau. A copse of very old trees stands to one side. A regular, terraced, back garden, reached via granite steps, looks down on to the rear of the chateau.The first castle dated from medieval times. In the 16th century, its status was raised to that of a “châtellenie” (an officially recognised castle and its land). All that currently remains of these eras is the dovecote, the chapel as well as the castle’s two pavilions.At the beginning of the 18th century, these two pavilions were connected by a vast building. The chateau, the outbuildings and parklands underwent major restoration works in 2010. A good number of these features are now protected with French Historic Monument listing (by order dated 13 March 1989): the chateau and the chapel; the dovecote facades and roofs; the perimeter wall with its moat and its support walls; the facades and roof of the little, 18th century corner pavilion; the garden with its fencing and its towers as well as the shelter over the central well; the wood and, lastly, the large alleyways in the parklands.The chateauMost of the construction is the work of a wealthy trader from Laval who, in the 18th century, became the owner of the premises. His coat-of-arms are still to be seen in the middle of the main facade of the chateau. The latter comprises a central building, connecting two pavilions. The main building spans seven, regular bays and three levels, including one below the rafters. It is topped with a three-sloped slate roof. Its front facade features an octagonal tower, protruding from the east gable. Behind, two impressive pavilions are also topped with elegant hip roofs. One of them has a finial representing Judith, holding the sword and head of Holofernes in her hands. The openings, all arched, are framed with dressed stone or granite. The cornices and the quoins are made of freestone. A porch with a few steps provides access to the main entrance door.Ground floorThe entrance door opens into a vestibule, housing a large, listed wooden stairway. Straight on is a passageway which leads to a toilet and a door to the cellar, as well as to the kitchen and the back kitchen. A vast dining room, on one side, features outstanding panelling, parquet flooring and a marble fireplace. On the other side is a cloakroom, followed by two adjoining lounges and a study. The first lounge comprises oak wood panelling and a marble fireplace. The second lounge has wainscoting and a marble fireplace. Both rooms have parquet flooring. The study, with its exposed stone walls, has terracotta floor tiles and a stone fireplace. Doors in the first lounge and the study lead directly out on to the rear terrace. All these rooms have French ceilings.First floorA door, half-way up the stairs, opens into a hall area leading to a …

Listings similar to this castle, Laval

Located mid slope of a valley with park of _ hectares, this magic castle in the pure style of Azay le Rideau has been completely restored over the last 3 years in accordance with the...

Ref. 3673 Elegant neogothic Chateau for sale in Mayenne department This property is located in the department of Mayenne, between the cities of Laval and Château-Gontier, in a charming,...

Close to Laval, a chateau built in 1857 by the architect Delarue, with approx. 900sqm of living space on 3 levels and a full basement. The property offers bright reception rooms and has...

5 minutes from the town of Laval, an 18th and 19th century chateau. The property has been renovated and offers 370sqm of living space with 6 bedrooms and bright reception rooms. There... 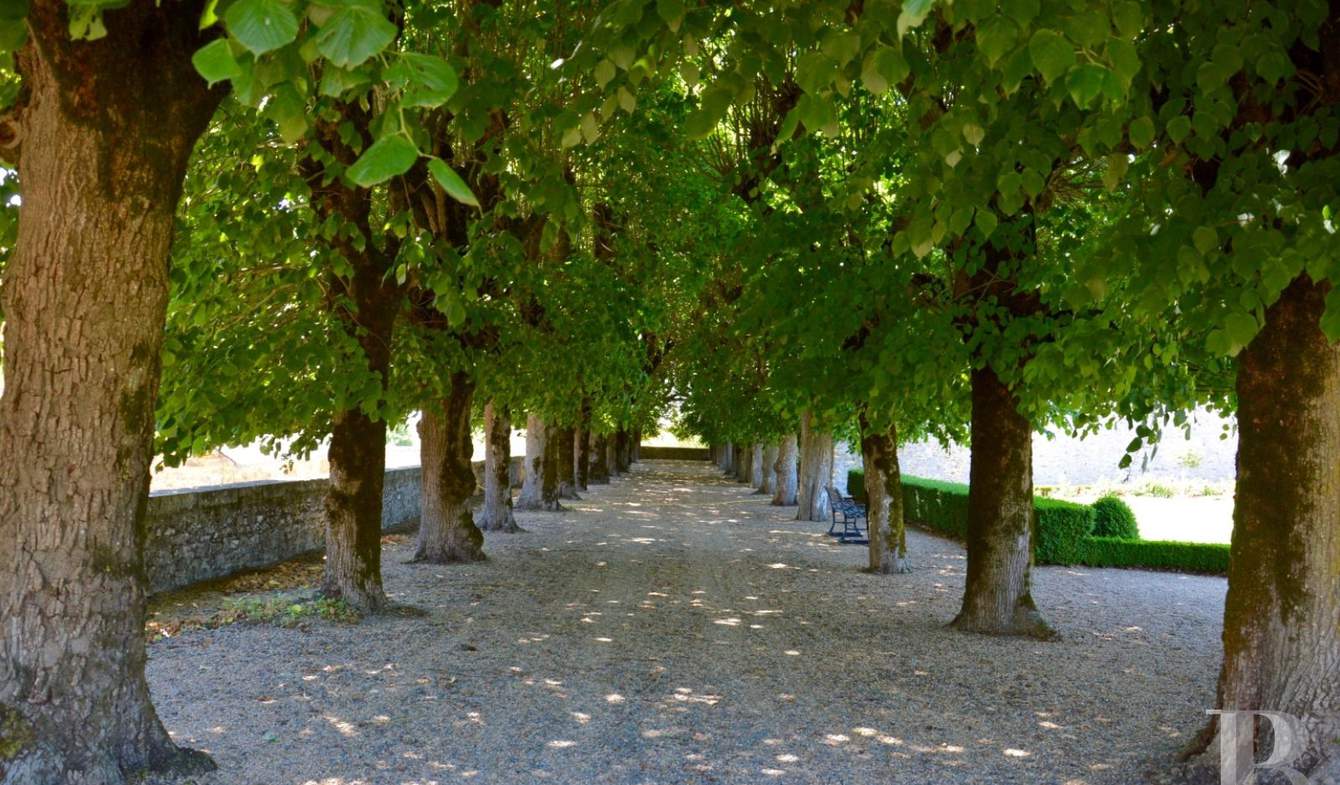