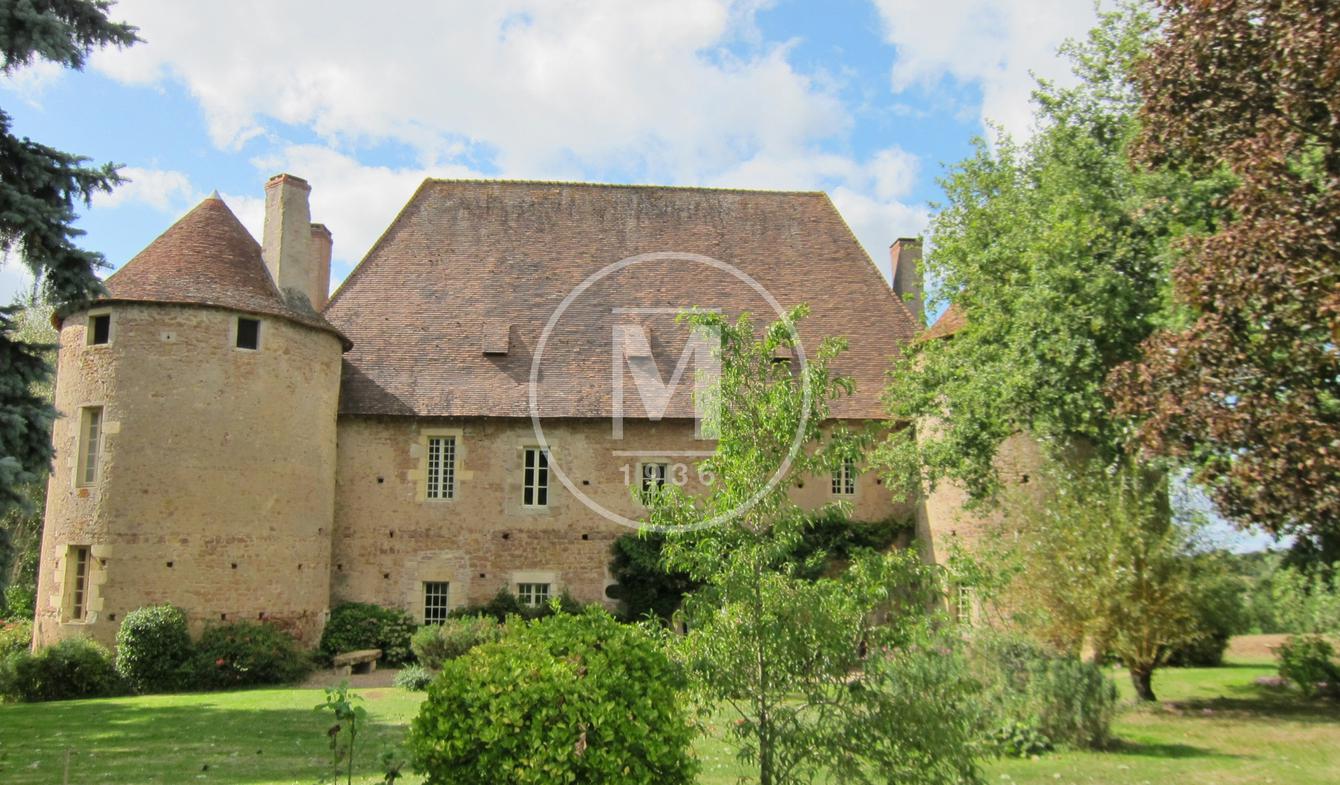 In the region of Decize, fortified house from the XV-XVIIth centuries registered MH, representative of the military and rural architecture of Nievre at the end of the Middle Ages, of approximately 390 m2 living space on two levels in a dozen main rooms including large receptions and currently 6 bedrooms and 3 bathrooms or shower rooms.Very beautiful elements: fireplaces, French ceilings, terracotta floor tiles, arches ...Several outbuildings forming an interior courtyard, including an 18th century barn inscribed MH. The land represents an area of approximately 14 hectares including a park and pleasure garden with heated pool 5.5x11m and pool house, a pond of approximately 1.50 hectare, various plots of plantations, orchards and meadows. All of the plots are free of all rights.Brief history and description: The fortified house built in the 15th century has a central body on two levels, flanked by two round towers on the corners of its eastern facade. Covered by a tiled roof with four steep slopes, the central body presents on its two facades high windows with harpoon chaines and molded support, fitted out in the XVIIth century. key. Covered with a conical tiled roof, the two towers were also pierced with a window on each of their levels. But they still offer gunboats on several levels, notably at the base of the northeast tower where a stone ball-joint loophole is visible. The consoles of the bretech that defended the entrance to the west facade remain above the door, altered. The interior has undergone modifications at different times. There are French ceilings on stone crows and two Renaissance fireplaces, one of which has fluted legs and ionic capitals.At the upper part of the towers, the old guard room, surmounted by a double lock, offers gunboat embrasures arranged in different orientations. On the north side of the interior courtyard, stands a large building used for common, covered with a broken roof.The main building - approximately 390 m2 of living space: Access by a double stone staircase leading to a porch opening onto the entrance hall on the tomettes floor, with 3-sided stone staircase and loophole. -Ground floor: a large living room (approx. 53m2) with 17th century stone fireplace, tiled floors, French ceiling, with a stone staircase leading to the cellars. South-east corner tower for office use with 17th century chimney, tiled floor, French ceiling, rare pivoting archway showing the defensive role of the premises. Fitted and equipped kitchen (approx. 12m2) in the old chapel, tiled floor. On the other side of the vestibule and the staircase: suite of small rooms created in the 20th century and distributed by a corridor: a toilet, a bathroom and shower, 5 bedrooms (approx. 12, 13, 11, 11, 25m2) including one in the tower with a stone fireplace and another with a private shower room, the floors are carpeted.- First floor: unheated and essentially to be restored. Landing, former living room (approx. 58m2) parquet floor, French ceiling, ceiling height approx. 4.30 m, one bedroom (approx. 25m2) in the tower with 15th century chimney, two arches, old latrines. On the other side of the landing, a large room with French floor tiles and ceiling has been partitioned with: a room currently playroom (approx. 26m2), a room with 15th century fireplace (approx. 35m2), a corridor, a shower room / laundry room with wc, a room with tomettes, wooden fireplace, French ceiling in the tower (approx. 25m2 ). The staircase finally leads to the attic composed of convertible attics under a roof with original framework. The house is built on 3 vaulted cellars, one of which is used as a boiler room.The outbuildings: The interior courtyard consists of: - an entrance porch,- a building comprising garage and workshop.a barn from the 18th century, comprising a stable of 3 boxes,shed, garage, old table, woodcutter. - an old kennel - an awning.A wrought iron gate gives access to the meadows and the pond below. Historic Monument: The fa

Listings similar to this castle, Decize (58)

15th,18th, 19th century property on 3,5ha crossing a stream Close to la Charité sur Loire, (only 5km from A77) this property, located on the edge of a forest and crossed by a stream, is...

A medieval fortress dominating a wide valley in the centre of France. This castle, where the regions of Burgundy, Centre and Auvergne meet, stands on land with a rich architectural...

On the edge of a quiet hamlet, on an old pilgrimage stop of Sainte-Agathe, this property including a castle, its outbuildings, and its park alternating between French garden, woods and...

Northeast of the department of Nièvre in the direction of Corbigny, about 40 km from Nevers, in the canton of Chatillon en Bazois, in a dominant position, Chateau du XVIIIth century ... 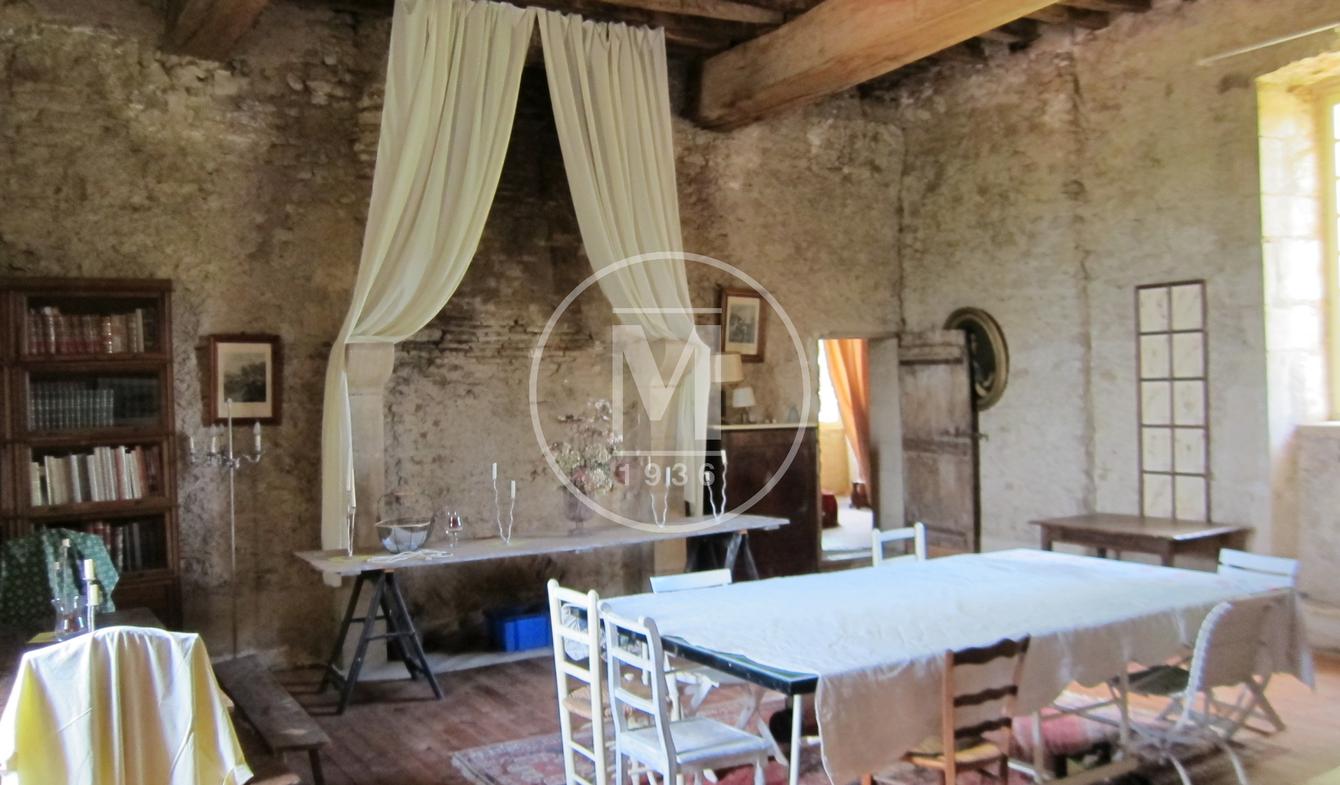