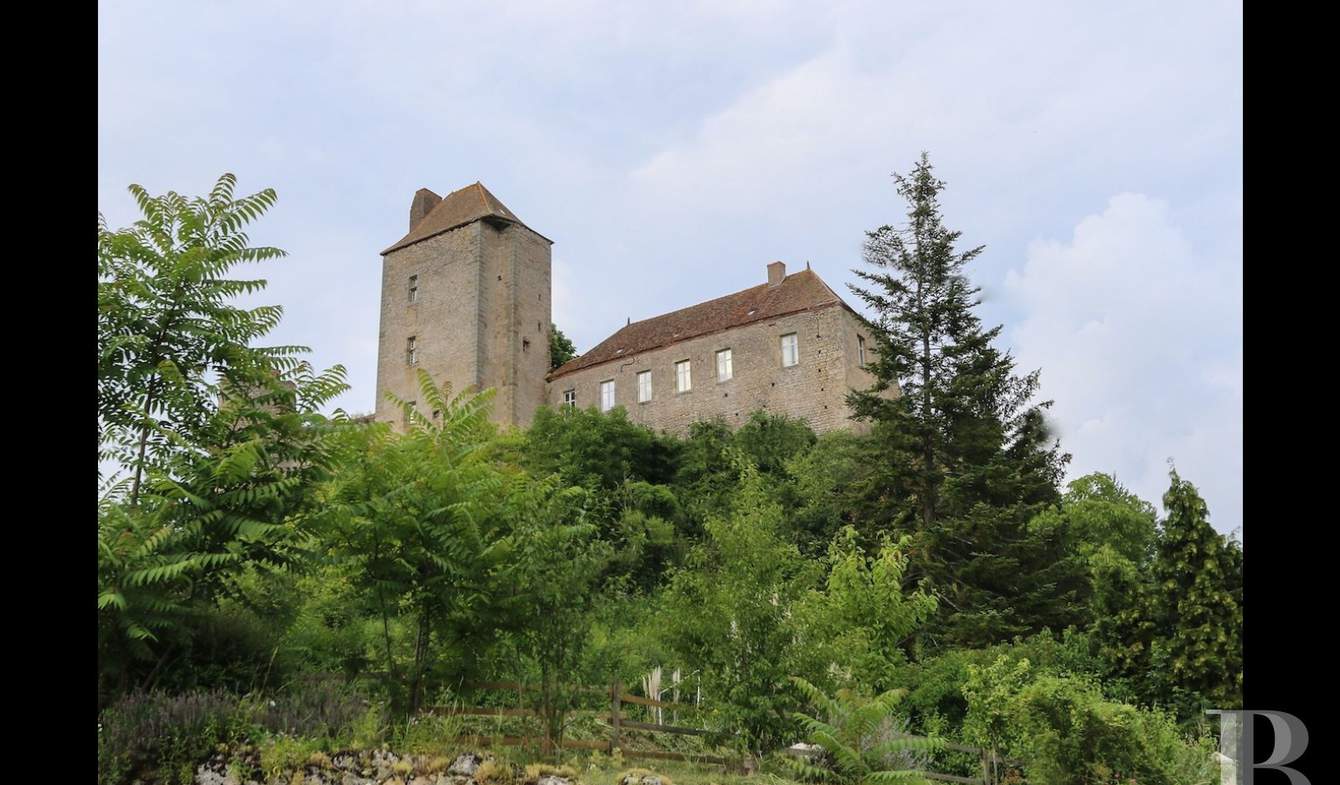 A 13th century stronghold house and its dwellings dominating Besbre Valley in the Bourbonnais region.The verdant countryside, in the French department of Allier, on the outskirts of the old Bourbonnais region, facing the Duchy of Burgundy, is full of small fields and hedges, crossed by numerous rivers which have formed little valleys. The villages are laid out as market towns, constructed of stone, very often clustered around a church. This stronghold house is in the immediate proximity of road and motorway networks as well as a train station with 2-hour links to Paris-Bercy.A narrow verdant alleyway constitutes not only the access to the residence but also its protection as the surrounding vegetation is so dense. The entrance gateway is topped with a wrought stone semi-circular arch. On the immediate left-hand side of the courtyard are the remains of the old square keep and a more recent building. Stone protruding from the walls still mark the position of the floors on the various levels.On the east side, the wall supported by two buttresses features an opening characteristic of the 13th century. The south-facing wall has a Romanesque door on the right-hand side of the entrance. Two round towers, which have lost their machicolation and battlements, are joined by a curtain wall. All that remains today of the doorway protected by a drawbridge is a stone arch visible from the outside. The round tower on the west side, with its 1.60 m thick walls, features a cross-rib barrel vault that dates back to the 13th century.In the middle of the courtyard, adjoining the old keep, are a house and a very deep well. The keep itself, constructed after the 13th century, is robust and impressive. It spans four levels. A building, used as living space and dating from a more recent era, stands at the end of the courtyard on the south side.The old sections date from the 13th century. This property was no longer of any interest in the 16th century as the state of Burgundy had disappeared, victim of the unification policy adopted by the kings of France. All the buildings are topped with hip roofs, covered with Burgundy tiles, and feature irregular medieval windows.The dwellingThis dwelling, built in the 18th century, comprises but a ground floor and is connected to the keep. It is entered via double carved doors, coming from a luxury flat in the Place-des-Vosges in Paris. The hall, which includes wall cupboards on either side, leads into a corridor and a living room. Further away, a triple aspect lounge faces east, west and south. It houses a bookshelf unit and a marble fireplace. The floor is covered with strip pattern parquet flooring. The corridor leads to three bedrooms, a bathroom, a study and a toilet.The living room is adorned with a monumental fireplace and is superbly illuminated by three windows which look out over sheer drops. Its floor is covered with terracotta tiles. It communicates with the garden and with the vaulted cellar in the keep.The vast attic spaces could be converted.Ground floorThe keepThis building is connected to the second round tower by a thick wall. Its first level is laid out above a vaulted cellar. Opposite, in the courtyard, a horse chestnut tree and a stone ornamental pool enhance the garden. A stone stairway goes up to the first floor. A spiral stairway then continues up to the second floor and the attic space.Ground floorThis level comprises the kitchen, leading to the living room.First floorThis level spans 24 m². The bedroom is adorned with a monumental fireplace. This level also includes a shower room and toilet.The terracotta tile floor is covered with sea-rush matting. A mullioned window looks out over the garden.Second floorThis level spans a similar …

Listings similar to this castle, Vichy

Villa with pool and terrace Vichy (03)

8km from Vichy, a villa of 377sqm enlarged and modernised in the '80s. 13 main rooms including 6 bedrooms. Large living room of 80sqm. Great condition throughout with nice fittings....

House with pool and terrace Vichy (03)

At 13km from Vichy, character house completely renovated with excellent benefits and a contemporary decoration based on natural materials. Developed area of 520sqm for 280sqm habitable...

House with pool and terrace Vichy (03)

This mill is located 5 km from Vichy on the banks of a 1st category river. Built in the 19th century, it has been completely renovated over the past ten years. The estate is composed of...

Lovely 17th century Mansion in perfect condition in polychrome brick , typical of Sologne Bourbonnaise, on 6105m² of park , with barns and outbuildings, surrounded by meadow. Two... 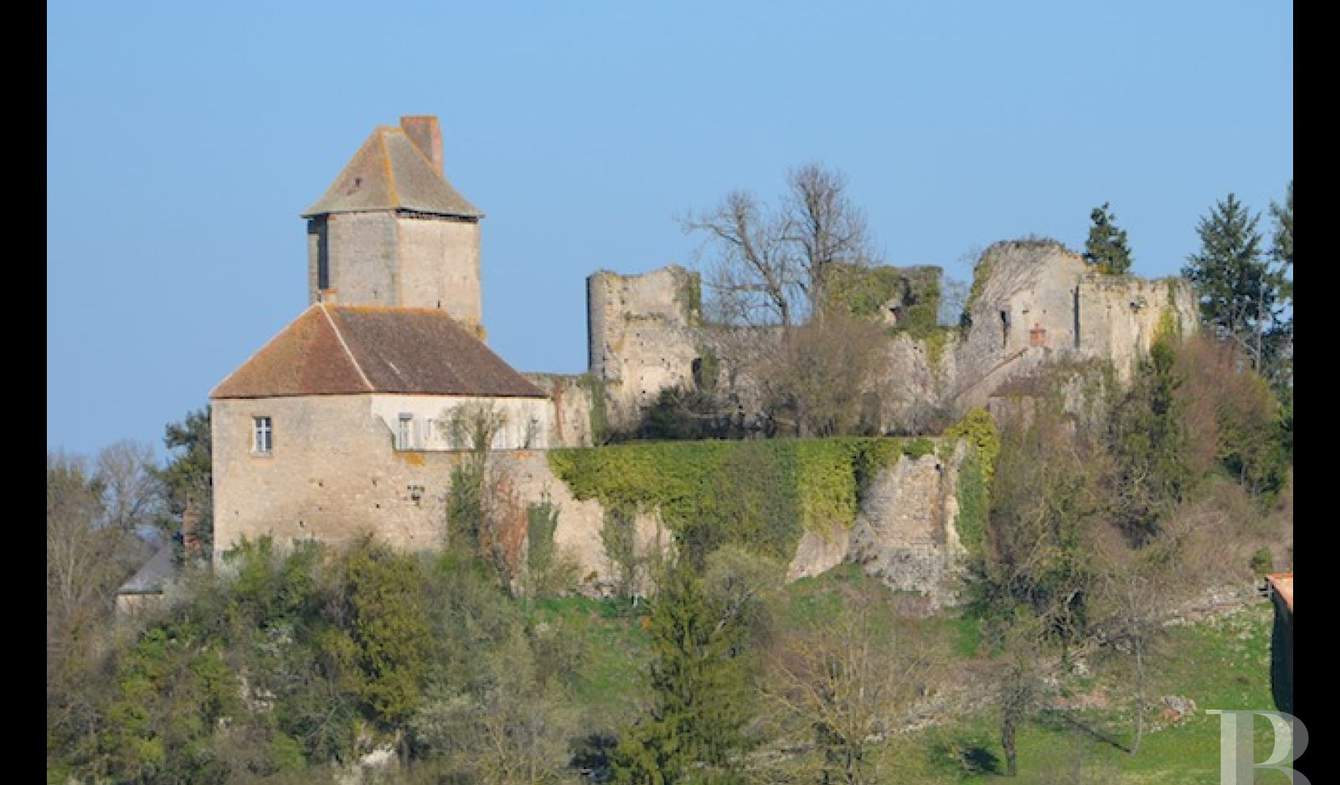