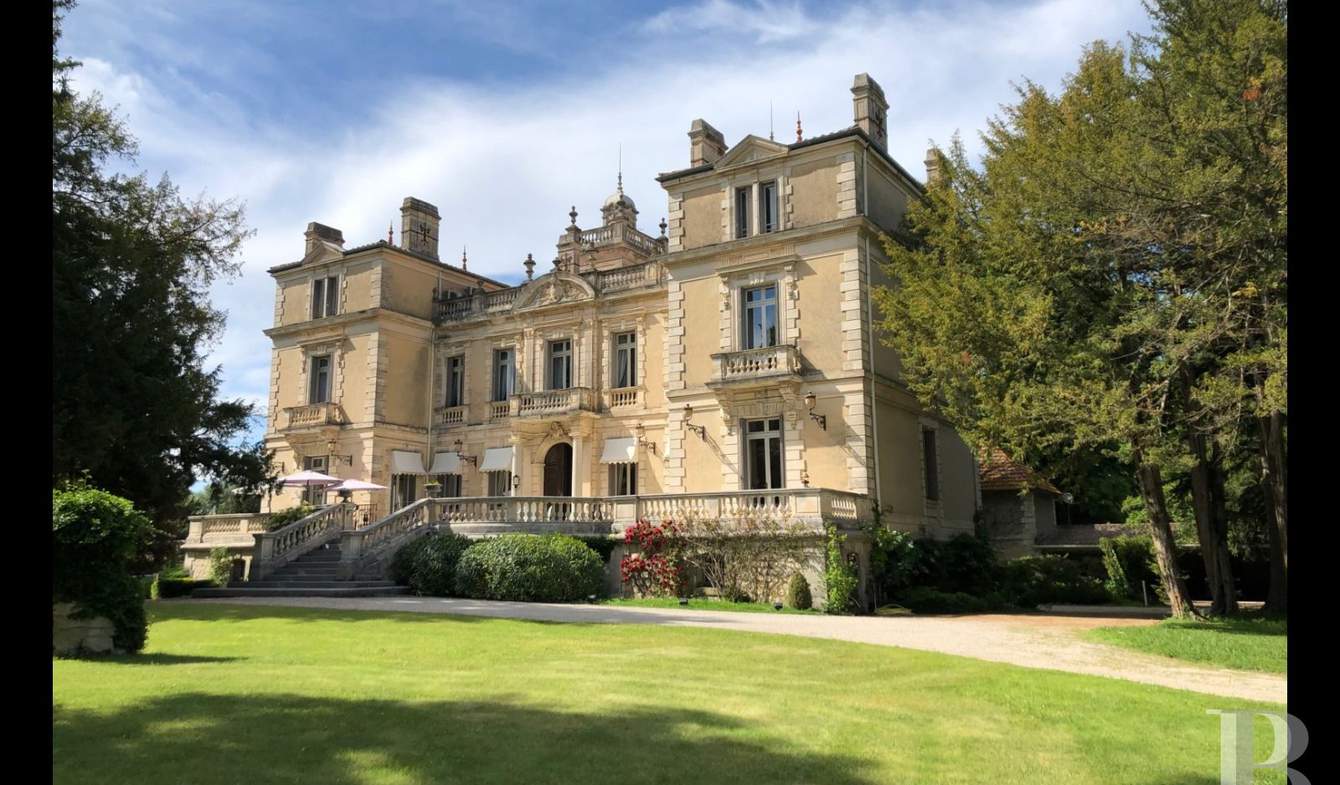 A 19th century chateau with its outbuildings in 9 hectares of parklands between Avignon and Carpentras.This property, near to Carpentras and Avignon, stands on the Monts-de-Vaucluse plain, less than 30 minutes from Avignon and its TGV train station as well as the motorway network and 75 minutes from Marseille airport. The region is dotted with villages, scattered between plateaus and plains as far as Mount-Ventoux. Sometimes on a hilltop, but always picturesque, they populate an authentic, convivial Provence, steeped in history. Local markets provide an abundance of fruit and vegetables gathered from the region’s fertile soil. Country paths winding between vines and lavender fields are ideal for hiking.The main gates open on to a drive, flanked by areas laid to lawn, bordered with boxwood and two-hundred-year-old trees. A secondary drive on the west side runs alongside vast, single-storey outbuildings, with Roman tile roofs, that extend at right angles next to a vast area laid to lawn. The main drive, bordering a rose garden, goes to a carpark before leading to the chateau. The building facade, its terrace and the main, south-facing flight of steps look out over a waterfall, the parklands and a swimming pool. Behind the residence, the caretaker’s cottage and a flimsier construction stand amongst the trees. A plot left as grassland in the northern section of the estate has been laid out as an additional parking area. This grassland extends predominantly on the east side of the chateau. Numerous secondary driveways, delimiting the parklands, enable residents to move around the property. A second entrance gateway, flanked by tall stone pillars, is concealed at the end of a secondary driveway on the east side of the parklands.The 19th century chateauThis residence spans a total of approx. 900 m² of living space over four levels. The garden level is on the chateau’s rear facade. The front facade features a flight of stone steps, bordered with balusters, which goes up to a wrought iron gate opening on to a terrace. The latter, also bordered with balusters and laid out in a gracious semi-circle, runs alongside the perfectly symmetrical facade. Composed of a central section flanked by two wings, the building features openings with wrought stone surrounds. Two monolithic columns, topped with capitals, support a balcony with balusters on the first floor, the central opening of which is enhanced with a curved tympanum with central sculpted decor. A wrought sculpture tops the main, raised-basket-handle-arched door set between the columns. The building’s four other openings are also bordered with balusters in a perfectly symmetrical manner.Garden levelThis level is taken up by a professional kitchen, a boiler room and a workshop.Ground floorA few steps go up from the terrace to the raised-basket-handle-arched door. The latter opens into a vestibule which houses the main stone stairway and leads to a large lounge, with a fireplace, two other lounges and a flat, with a bedroom and a shower room. The floors are tiled with marble, the wide openings looking out over the parklands are edged with balconies featuring balusters. The panelling and ceiling frescoes have been meticulously restored in strict keeping with their authenticity and the chateau’s history.First floorThe stone stairway, edged with wrought railings, goes up to a landing that provides access to four bedrooms and two bathrooms. A suite is widely illuminated via French windows which open on to a balcony with balusters looking out over the parklands. A small lounge and a marble bathroom. Three bedrooms have a view over the parklands, a bedroom opens on to the rear of the chateau.Second floorThe second-floor landing provides access to two bedrooms and their shower room, a flat, with a bathroom, as well …

Listings similar to this castle, L'Isle-sur-la-Sorgue

Magnificent property for sale in Goult ,in the heart of the Luberon. This superb hospitality facility sits on more than 14 hectares of land in an exceptional location and features a...

A truly unique and immaculate 19th Century Castle, near L'Isle sur la Sorgue, which enjoys total peace and tranquillity within an idyllic park of about 3,8ha with swimming pool. This...

A couple of minutes from a village of the South Luberon, a 30 acres wine making property A superb priory offers approximately 700 m² of surface About 8.5 hectares of vineyards in AOP... 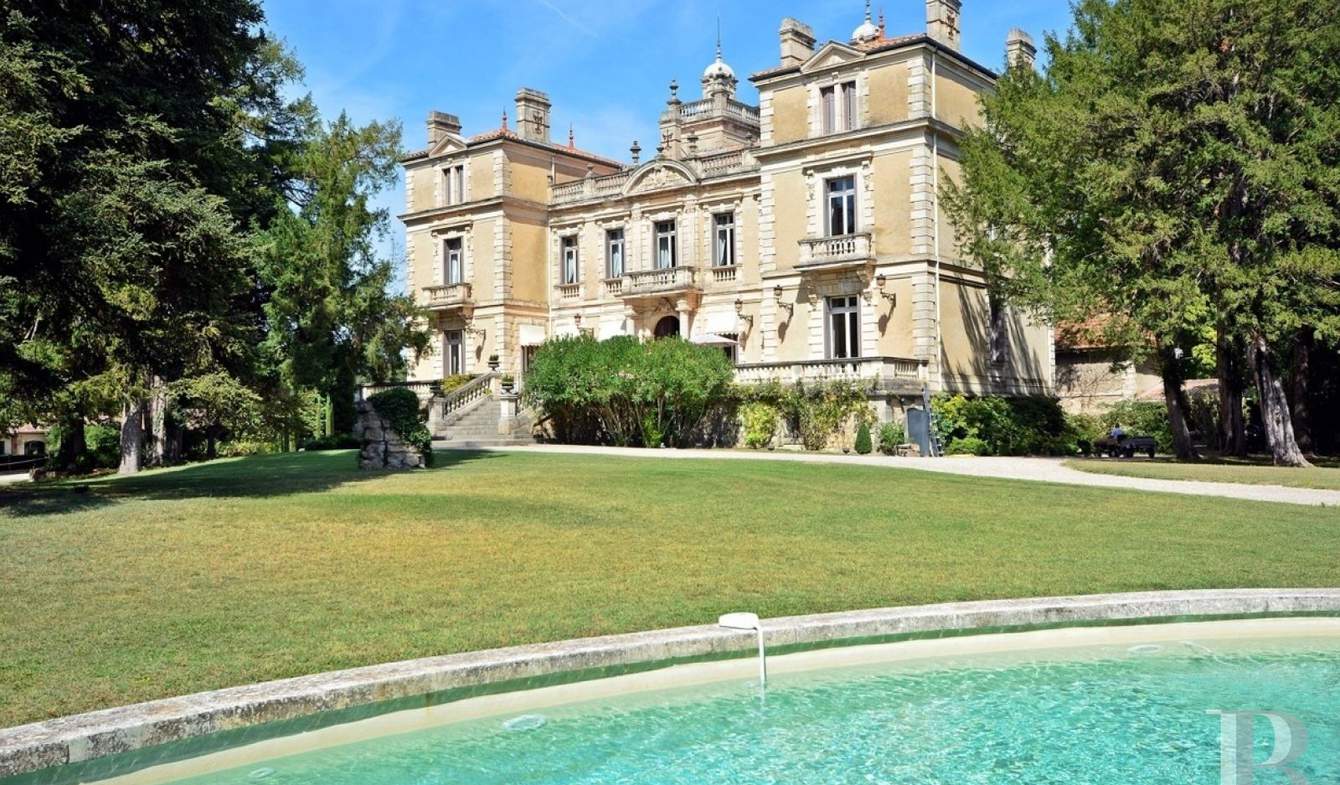