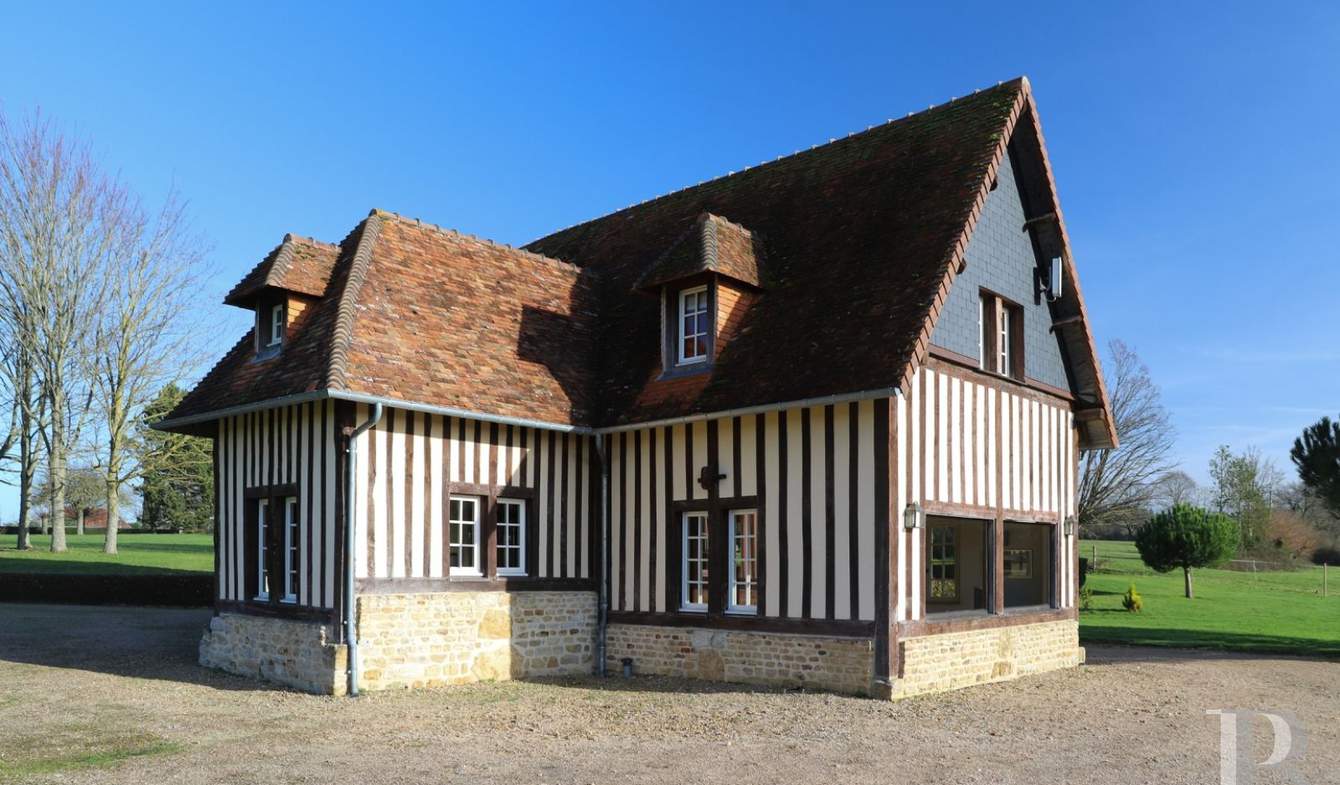 Two half-timbered houses, a tennis court, a swimming pool and its pool-house, set in 2 ha of land, 30 km from the Auge Country’s “Fleurie” coast.This property is in a region renowned for its typical architecture, its gastronomy and its cheeses. 210 km from Paris via the A13 motorway and 30 km from Normandy’s “Côte Fleurie” (Coast of Flowers) and its holiday resorts. Lisieux, with all its useful amenities, is 10 km away. Its train station provides 1¾-hour links to Paris. 6 km from the nearest village with its local shops.A sunken lane turns off the secondary road prior to slowly winding its way up to the top of a little valley where it goes through a small forest. On the other side, still on the crest, it reaches a gateway, surrounded by thuja and flanked on either side by two chestnut trees. Partially bordered by meadows, this property is included in the small forest. Set on a hill, it dominates the little valley and has an unobstructed view. Two half-timbered houses and their gravel courtyard are surrounded by vast lawns dotted with tall trees, planted singly or in copses. Both dominate the valley. At the end of the grounds, a tennis court adjoins a swimming pool and a small half-timbered house.The main houseThe main house dominates the valley, the fields, the meadows and the forest as well as the distant horizon. Constructed of half-timbering on quarry stone block lower sections, it is topped with a gable roof, laid with flat tiles and featuring roof dormers. One gable is covered with slate shingle above the half-timbering. A square extension adjoins the middle of one side. This house is surrounded by a packed-down courtyard. A rectangular pool has been hewn lengthways in front of a gable, with its two large windows, looking out over the horizon.Ground floorThe entrance door, set in the corner where the square extension meets the house, opens into a hall. The beams and joists are exposed. The walls are painted a light, contemporary colour. The floor is laid with strip pattern, light-coloured oak wood parquet flooring. A kitchen and a vast living room, on either side of the hall, are separated by large glazed partitions. The kitchen is illuminated by windows on three sides. A door opens on to the rear of the house. The floor is paved with large, dark, modern tiles. A wooden stairway stands facing the front door in the hall. The living room is composed of a lounge area as well as a dining area, housed in the square extension, completely open into the lounge and with a ceiling going up to the exposed roofing framework. The walls feature openings, notably, the gable which has two wide windows, giving an exceptional panoramic view. A trapdoor in the floor provides access to a machine room.First floorThe stairway goes up to a landing, one side of which is fitted with railings looking down on to the dining area. A door on the other side opens into a toilet. Two bedrooms, with sloping ceilings, as well as their shower room and toilet are laid out on either side of the landing.The second houseThis second house, linked to the main house via a sunken lane winding through the midst of grassy areas, also dominates the valley. Surrounded by a gravel courtyard, it comprises a main building, flanked by a square pavilion. This half-timbered house is constructed on quarry stone block lower sections. Both roofs, one gable (with a side covered with slate at the back), the other hipped, feature flat tiles. The main building is bordered on the rear facade by a small extension, also with a slate roof. This house awaits full renovation works.Ground floorThe entrance door opens into a room, paved with brick and featuring exposed beams and joists. A half-timbered wall, with a doorway leading into …

A large, 19th century farm and its large, luxurious home mid-way between Caen and the D-Day Landing beaches in the French department of Calvados. This property, just a stone’s...

This small chateau of about 360sqm, flanked with two pavilions to be converted, has kept all its original features. It is enclosed by stone walls and benefits from a garden of 2700sqm...

Barnes is inviting you to discover this superb renovated farm complex with a guest house, horse stalls, and numerous outbuildings ideal for an array of projects. Located in quiet...