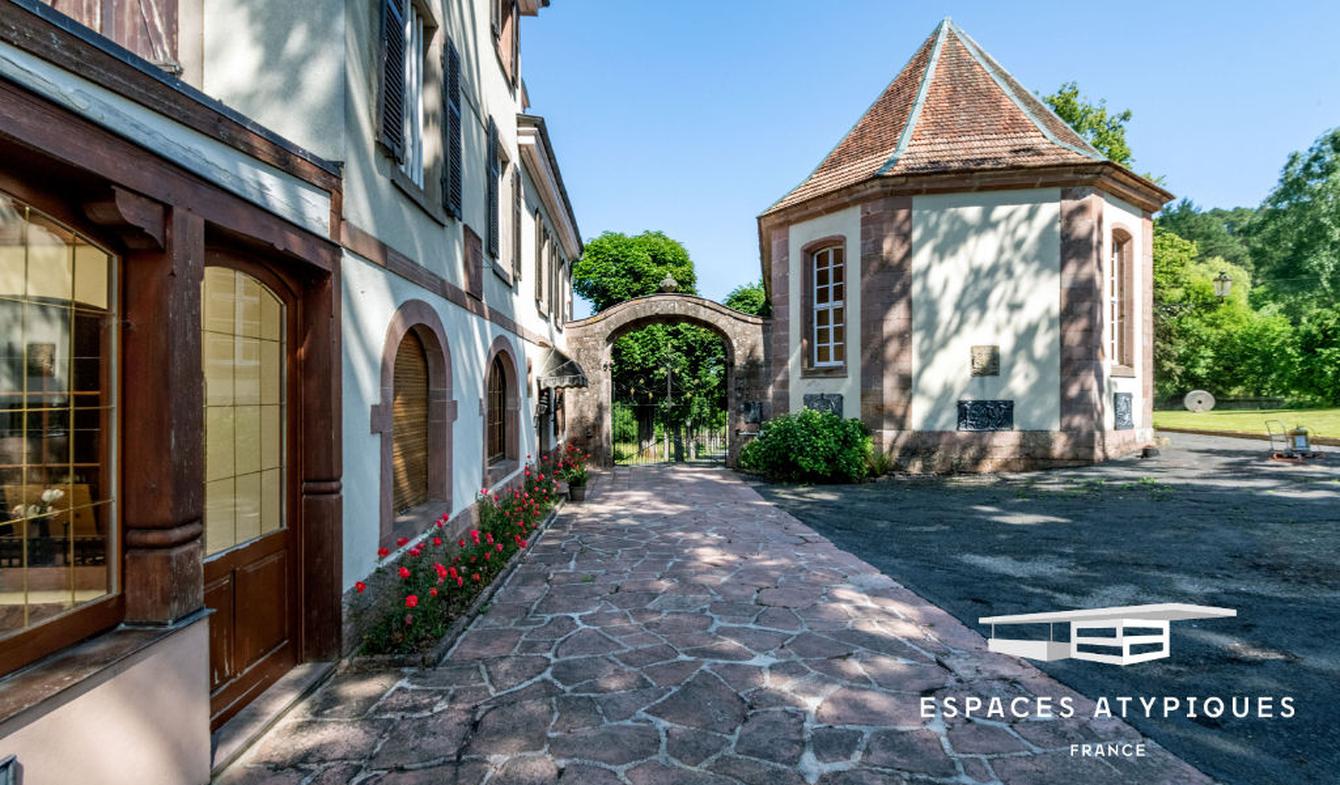 Emblematic property of a charming village in the heart of the Val de Villé, the origins of this 7.5 hectare estate go back to the year 1000. Abbey until the end of the 18th century, it was located in the middle of a preserved natural environment only 45 minutes from Strasbourg and could be the subject of many operations (guest rooms, organization of events, hunting lodge...). The majestic wrought iron gate is surrounded by a period stone enclosure wall and immediately shows the castle built in the mid 18th century and which covers nearly 252 m². Its three levels are articulated around a very beautiful spiral staircase in Vosges sandstone. Oak woodwork, exposed beams and white marble fireplaces are all evidence of a prestigious past. Adjacent to the castle, a desecrated chapel recalls the religious origins of the site. Also dating from the 18th century, it offers 135 m². Its splendid oak door reveals a completely open space with an impressive ceiling height. Now used in recreation rooms, it includes three majestic barbarian organs, one of which dates back to 1880. Built in the purest respect for the codes of Alsatian architecture, a charming little house houses a space dedicated to well-being, including a jacuzzi and sauna. Underneath it is the oldest vestige of the estate: a 273 m² Romanesque style cellar dating from the 16th century, once intended to store the 100,000 litres of wine produced by the abbey. Another testimony of this period: an authentic Burgundian wine press also takes place a few steps from the cellar. A 237 m² Alsatian house rebuilt in 1918 surprises by the generous and luminous volumes of its 47 m² reception area. It also includes the accommodation of a guard with an independent entrance. In its extension, a barn has been converted to accommodate horses, including six stables and a tack room. The buildings of the estate being grouped on one hectare, the rest of the 6.5 hectares are made up of forests. A private water source is accessible about 1 km from the castle. Selestat at 20 min Colmar at 40 min Strasbourg 45 min away Basel at 1h Zürich at 1h45 TGV train station 20 min away (Sélestat) Contact: Kevin 06.95.36.00.99 dont 5.00 % honoraires TTC à la charge de l'acquéreur.

Listings similar to this house, Strasbourg (67)

Situated 10 minutes from Truchtersheim, in an agricultural village of the Kochersberg known for its hops and its hilly landscapes, this house takes place on a ground of more than 13...

Less than 5 minutes from Obernai, in the centre of the historic city of Boersch, this property consists of two independent houses of 150 and 50 m² respectively. A true testimony to a...

Located in the centre of a village in the Eurometropolis, 20 minutes from Strasbourg, this 185 m² house benefits from a wellness area with a heated indoor swimming pool. It takes place...