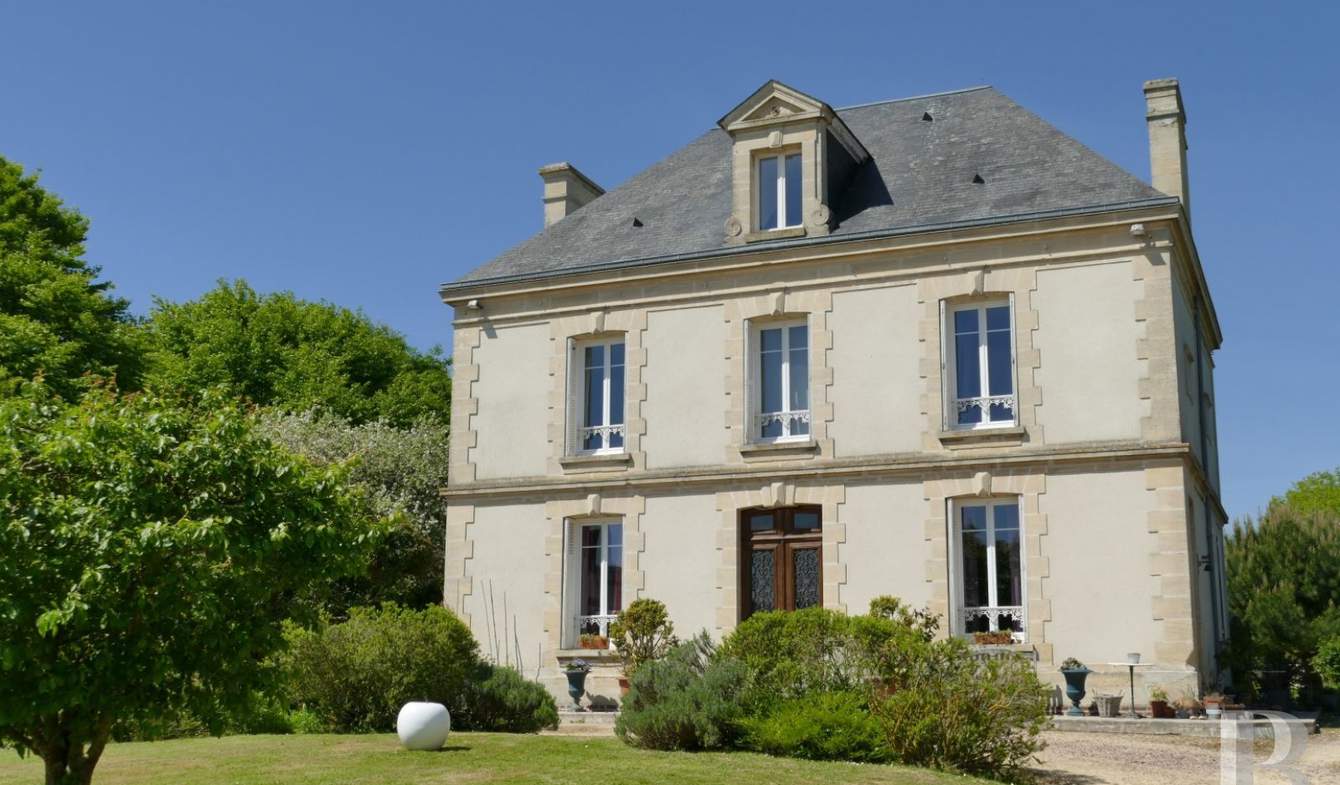 A large, 19th century farm and its large, luxurious home mid-way between Caen and the D-Day Landing beaches in the French department of Calvados.This property, just a stone’s throw from Sword Beach, is 250 km from Paris, a journey that takes 2½ hours by car and 2 hours by train, Caen station being 11 km away. Carpiquet airport, with its flights to Lyon and the south of France, is 12 km away. Local shops and supermarkets are 8 km away on the outskirts of Caen.On the edge of Caen plain, this property stands in the midst of a village, surrounded by fields and grasslands for as far as the eye can see. The farm building is bordered by a road and a meadow. A gateway, flanked by two Caen stone pillars, with a pedestrian gate, opens on to a courtyard. The buildings of an old farm are laid out in a U-shape, enclosing a lawn dotted with flower beds and fruit trees. A large, luxurious home on the open side looks slightly down on the outbuildings. An old stone henhouse and a vegetable garden form a sort of link between a meadow, behind the outbuildings, and a wooded garden that extends to the rear of the house.The large, luxurious homeThis square residence spans two levels under a converted attic floor. Separated by a stone string course, each of the levels has three openings. The walls are covered with light-coloured rendering. The hip slate roof features a roof dormer, adorned with scrolls and topped with a triangular pediment, above the front facade. The residence is made elegant not only by the symmetry of the facade but also by the geometry of the dressed stone. Caen stone has been used to fashion the quoins and the framing around the openings as well as the keystones, sculpted into a diamond shape.Ground floorThe entrance door opens into a through vestibule, illuminated by a tall, stationary picture window, set behind a wooden stairway. The walls feature exposed Caen stone. The floor is paved with contemporary, light-coloured stone. One of the two sets of double doors provides access into a lounge and the other into a dining room. A second door in the lounge and the dining room opens on to the terrace going around the residence. The kitchen forms a welcome link between the dining room and a wide terrace laid out on the side opposite to the courtyard.First floorThe stairway goes up to a landing which provides access to three bedrooms, a bathroom and a toilet. The biggest two bedrooms each have a fireplace and communicate via a shared dressing room.Second floorThe landing leads to two perfectly symmetrical bedrooms and a bathroom. The rooms have sloping ceilings and are illuminated via two skylights. A dressing room has been laid out next to a gable end.The guest houseLaid out in the farm building, once the farmer’s home, it awaits full restoration works.Ground floorThe entrance door opens on to a landing with a wooden stairway and a doorway leading to a living room. The latter still has its original features, including a stone fireplace adjoined by a “potager” (a secondary hearth where soups and other previously prepared dishes were cooked on embers). A stone sink, with a drainage system leading outside, is topped with a window. The floor is paved with wide stones. Two doors, on either side of the fireplace, provide access to two rooms. A doorway at the other end opens into an area under the stairway, where stone shelves remain.First floorOne of the two doors on either side of the stairway leads to a large bedroom, the other to two adjoining rooms. They are illuminated via one or two windows. The two biggest rooms still have fireplaces.The large stableA large opening, flanked by two vertical …

Listings similar to this house, Caen

Two half-timbered houses, a tennis court, a swimming pool and its pool-house, set in 2 ha of land, 30 km from the Auge Country’s “Fleurie” coast. This property is in a...

This small chateau of about 360sqm, flanked with two pavilions to be converted, has kept all its original features. It is enclosed by stone walls and benefits from a garden of 2700sqm...

Located in the heart of a closed park of more than 9700 m², come and discover this magnificent Normandy property. Once past the gate, you will be immediately seduced by its relaxing... 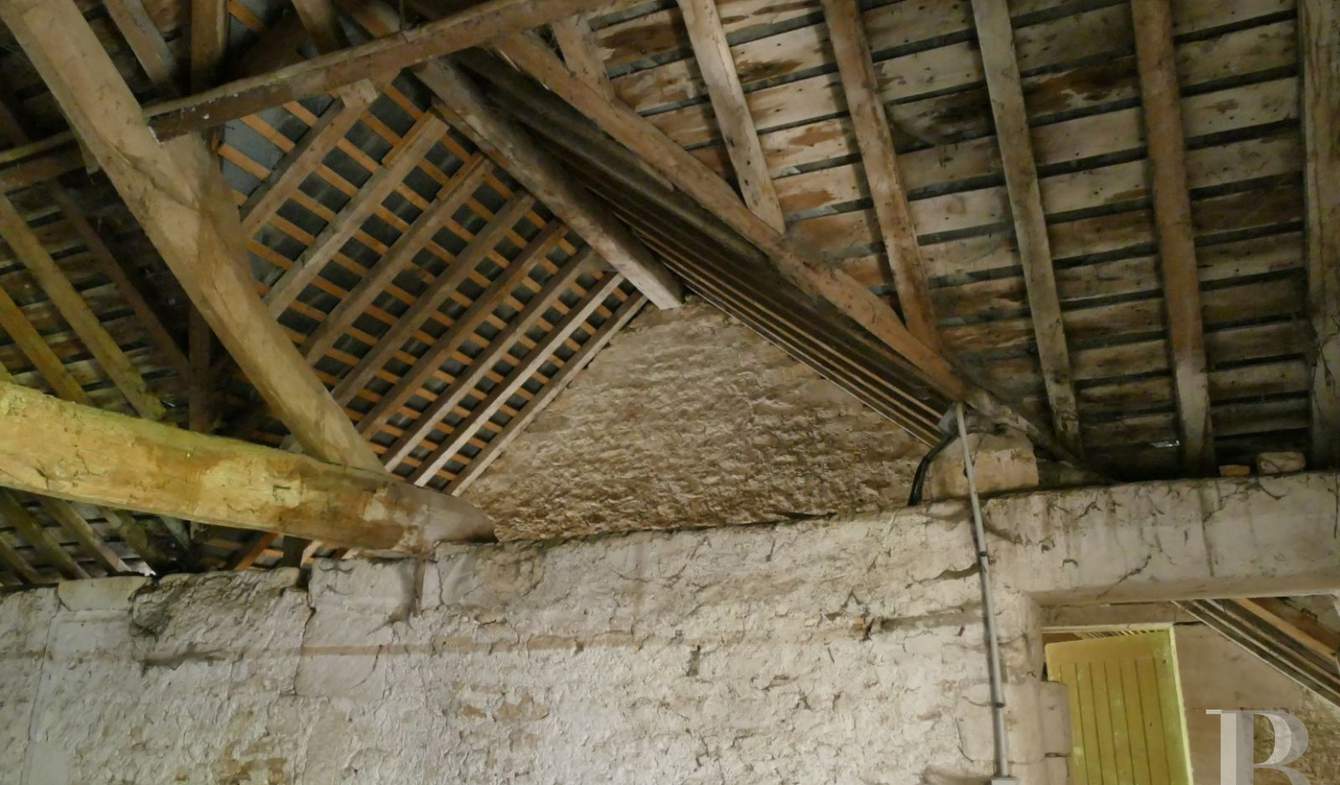