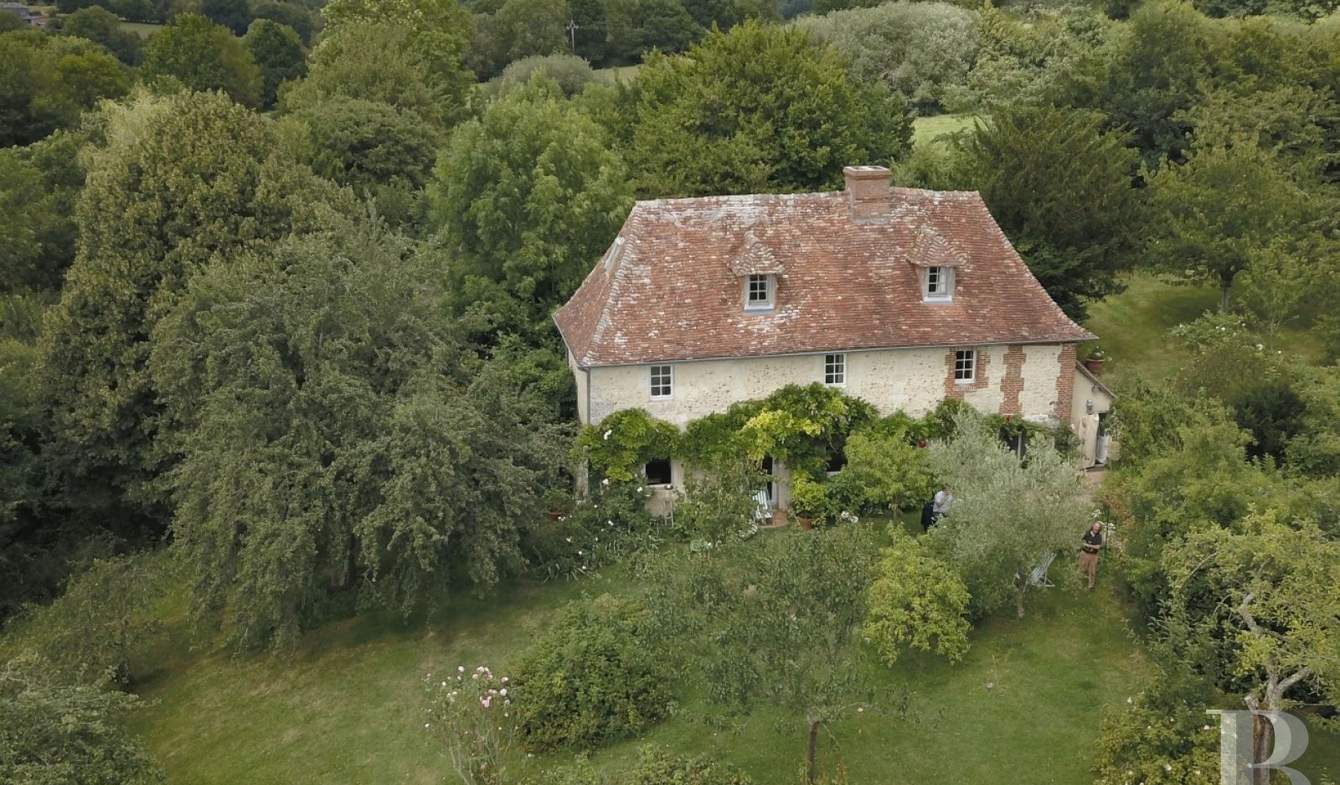 In the Auge region, with a dominant view over the French bocage countryside, an old, 18th century priory and its outbuildings, with more than 4 ha of land.This property is in a region renowned for its typical architecture, its gastronomy and its cheeses. It is 230 km from Paris via the A13 motorway and 40 km from the “Côte Fleurie” (Coast of Flowers), Deauville and other holiday resorts. Lisieux, with all useful amenities is 12 km away. This busy tourist and shopping town has some very popular markets. Its train station provides 1¾-hour links to Paris.A long, winding lane, set amidst bocage countryside where fields and meadows are surrounded by thick hedges interspersed with little woods, eventually comes to a dead end. A barrier provides access to this property and the garage at the entrance. The priory, a holiday rental accommodation unit and an old “charretterie” where carriages were once kept, are concealed amongst lawns, fruit trees, flower beds and tall trees. Whilst the artist’s studio, on the other side of the lane, is in a more open setting.The old prioryThis old, 18th century, rectangular priory is constructed from quarry stone blocks and flint. Quoins and two vertical string courses at one end are composed of red brick, which also frames two windows and a doorway under a wooden lintel. The hip roof, covered with flat tiles, features two roof dormers. A small extension with a single-sloped roof adjoins one of the priory’s gables.Inside the house, white is omnipresent on the walls and ceilings. The floors are paved with terracotta tiles on the first level and covered with white-painted, strip pattern parquet flooring on the two other floors. Beams have also been painted white.Ground floorDouble, glazed doors constituting an entrance open directly into a lounge. A separating wall between this lounge and a dining room is composed of two large adjoining fireplaces, the jambs of which are made of dressed stone, the hearths and the chimney breasts are brick and the lintels wood. These two rooms intercommunicate via open spaces on either side of the fireplaces. They are illuminated by windows looking out the front and rear of the house. A door leads to an adjoining kitchen. Its ceiling, composed of wooden lathes and cob, has been preserved and enhanced. Two windows look widely out over the wooded garden, with the other side of the valley in the distance.The small extension features three openings. A French window provides access via the main facade. A wooden door opens out on to the back garden. Said extension communicates with the lounge via an opening and is divided into two sections. The first is used as a small entrance hall and the second, with a toilet, is in use as a linen room.First floorA door in the dining room opens on to a stairway, going up to the first floor, where white continues to dominate. The landing leads to a bathroom and toilet, two adjoining bedrooms and a stairway going up to the attic space. The bedrooms are illuminated via windows, looking out over the wooded garden.AtticThe attic space spans the full floor surface area of the house. It is separated in the middle by the brick flue for the fireplaces. Beams have been left exposed. This area is illuminated via two roof dormers and a skylight.The holiday rental accommodation unitThis small half-timbered construction, with quarry stone block and flint lower sections, is concealed in the wooded garden behind the priory. It is topped with a gable roof, covered with flat tiles, and its walls feature two windows. The cob on one gable has been replaced with glazing. The internal space extends right up to the ridge. A mezzanine, illuminated via a skylight, has been added. A kitchen as well as a shower room …

Listings similar to this house, Lisieux

A small estate full of character in lush green surroundings and with a dominant view across the local countryside. In the heart of the Auge region, 10 minutes from Lisieux, this...

For those who love interior art decor, a magnificent apartment in the town centre of Caen, fully renovated with exceptional amenities, comprising a 3-room apartment on the ground floor...

Barnes is advertising this stunning 19th century mill located at the heart of Bessin, 12km from Bayeux, 9km from the D-Day Landing beaches, and 3km from Creully. The 300m2 (3,229 sq ft)... 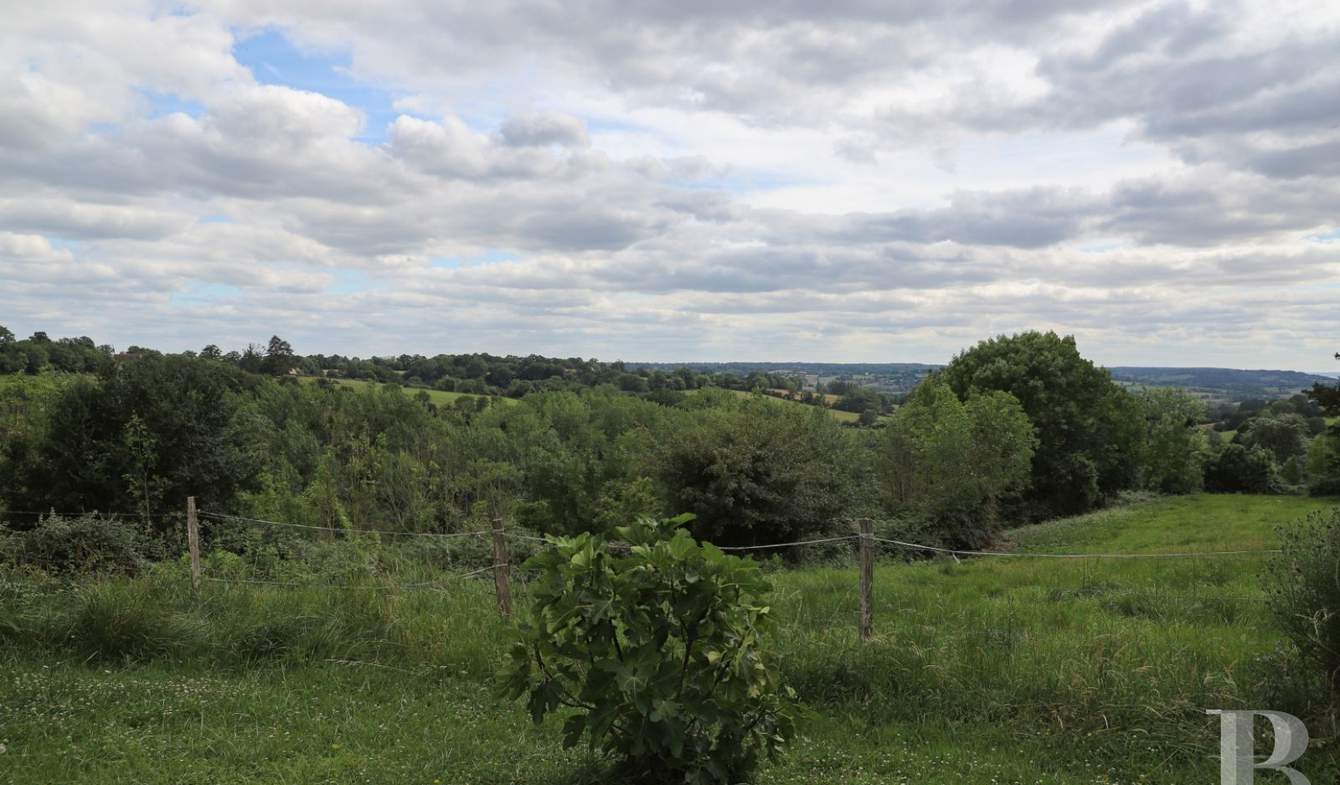