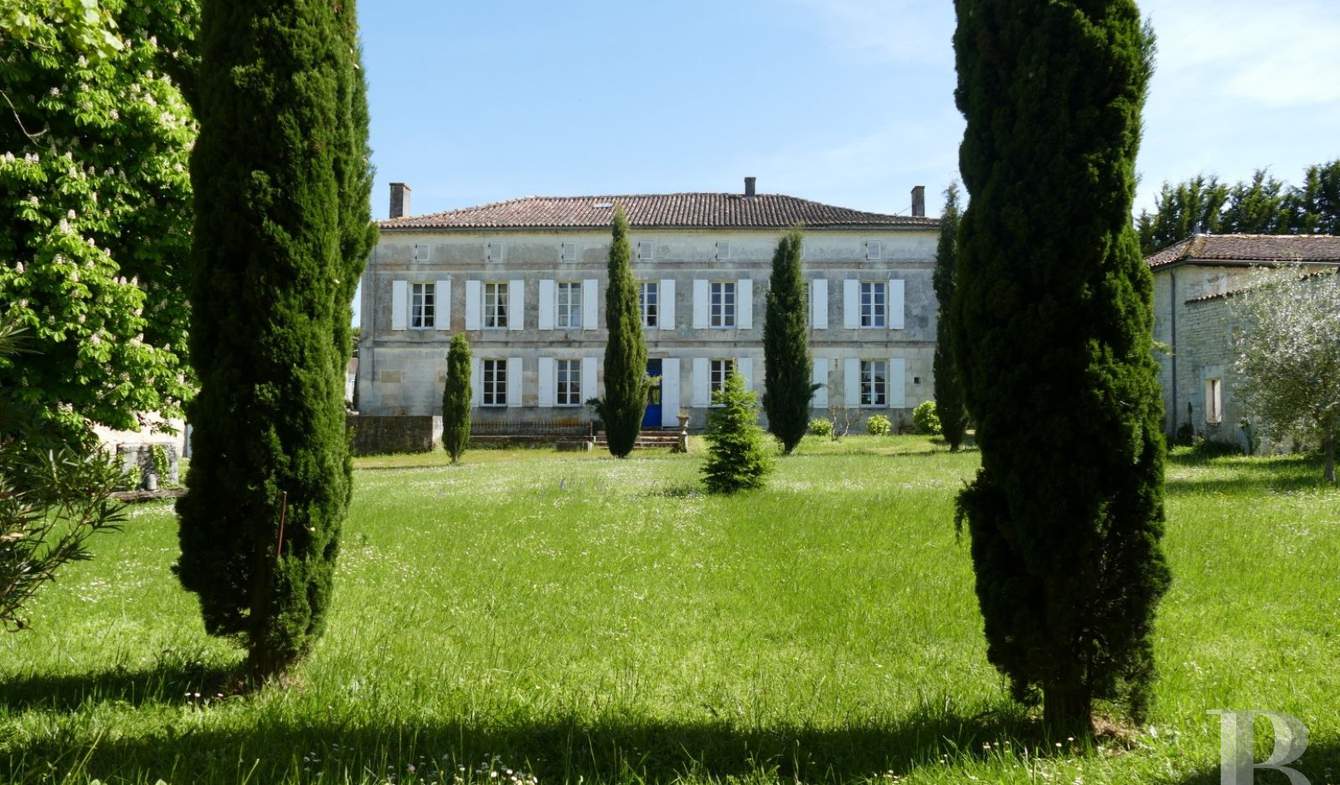 In a village in the “Petite Champagne” wine-growing area, 20 minutes from Cognac, a large, luxurious, Empire-style home and its outbuildings in 1.3 ha.This residence is in a village with all shops in the area around Cognac, just 20 minutes from the actual town of Cognac and near to the spa town of Jonzac, 25 minutes from the A10 motorway and 35 minutes from Angoulême with its TGV train station (links to Paris in just over 2 hours). The region, renowned for its production of prestigious “eau-de-vie” spirits, is one of the sunniest areas in France. The landscape is sculpted with hills, jostling one another in every direction, on which vineyards are cultivated like gardens.This large, luxurious house constitutes the central section of a U-shape, with outbuildings forming the adjoining sides. On the courtyard side, facing the main building, a dovecote with a pointed, hip roof stands taller than its neighbouring outbuildings. The courtyard is planted with a large chestnut and other cypress trees.The large, luxurious homeThis rectangular house has a hip roof, covered with Roman tiles. All the windows on the first two levels are of a similar size and flanked with dressed stone. The third level features small windows.Ground floorThis house is predominantly accessed via a terrace which gives access to a wide corridor, the right-hand wall of which is covered with a vast pastoral mural featuring birds and a small monkey. This corridor also houses the main stairway. A through passageway, it leads to a garden, planted with boxwood and palm trees, that separates the property from the village.A door opens into a dining room, with a fireplace, featuring a wrought mantel. It precedes a kitchen, with a fireplace, and an adjoining storeroom. The kitchen can also provide access upstairs via a small, spiral, open-newel stairway. A room adjoining the kitchen has been transformed into a study.A library has been meticulously decorated in a refined style. The wall lined with bookshelves conceals a door, similarly painted as a trompe-l'œil. Said door provides access to one room, currently in use as a workshop, and to one that could be transformed into an adjoining shower room.First floorThe main stairway goes up to a landing decorated with a large, landscape wall fresco which illuminates the area.On one side, a corridor leads to a suite, composed of two bedrooms, followed by a shower room with toilet. Opposite are two more bedrooms: one with a shower room and toilet, the other with a shower room and a separate toilet.On the other side of the landing, a door opens on to a corridor leading, on one side, to a bedroom, followed by a room, a dressing room and a bathroom with a separate toilet.Opposite, two bedrooms, with a vestibule, are separated by the spiral stairway going directly down to the kitchen.Second floorThis level under the roof could be converted.The outbuildingsThe outbuildings, constructed from quarry stone blocks with dressed stone framing around the openings, are laid out in a U-shape around the residence.OutbuildingA 2-storey building on the west side could accommodate a shop without need of any works.OutbuildingOn the west side, in front of the main building, this old house has a porch way opening into the orchard.DovecoteThis square dovecote comprises approx. 1,200 dove-holes. Its hip roof is higher than the ridges on the adjoining buildings. This group of buildings, forming one side of the courtyard, faces the main residence.BarnA barn adjoins a woodshed.

Listings similar to this house, Cognac

Located 10 minutes from COGNAC and 5 minutes from the golf, set in grounds of 2ha 34, this Logis Charentais dating from 1736, offers 399 m2 as living space, a caretaker's cottage,...

COGNAC - Magnificent 19th century mansion ideally located in the heart of Cognac, in a sought-after area, close to all amenities. This beautiful property offers approx. 440 m² of living...

Only 20 km from Cognac, north of Charente, magnificent property combining the charm of the old and the comfort of a quality renovation. Over 500 sqm of habitable space. You will be... 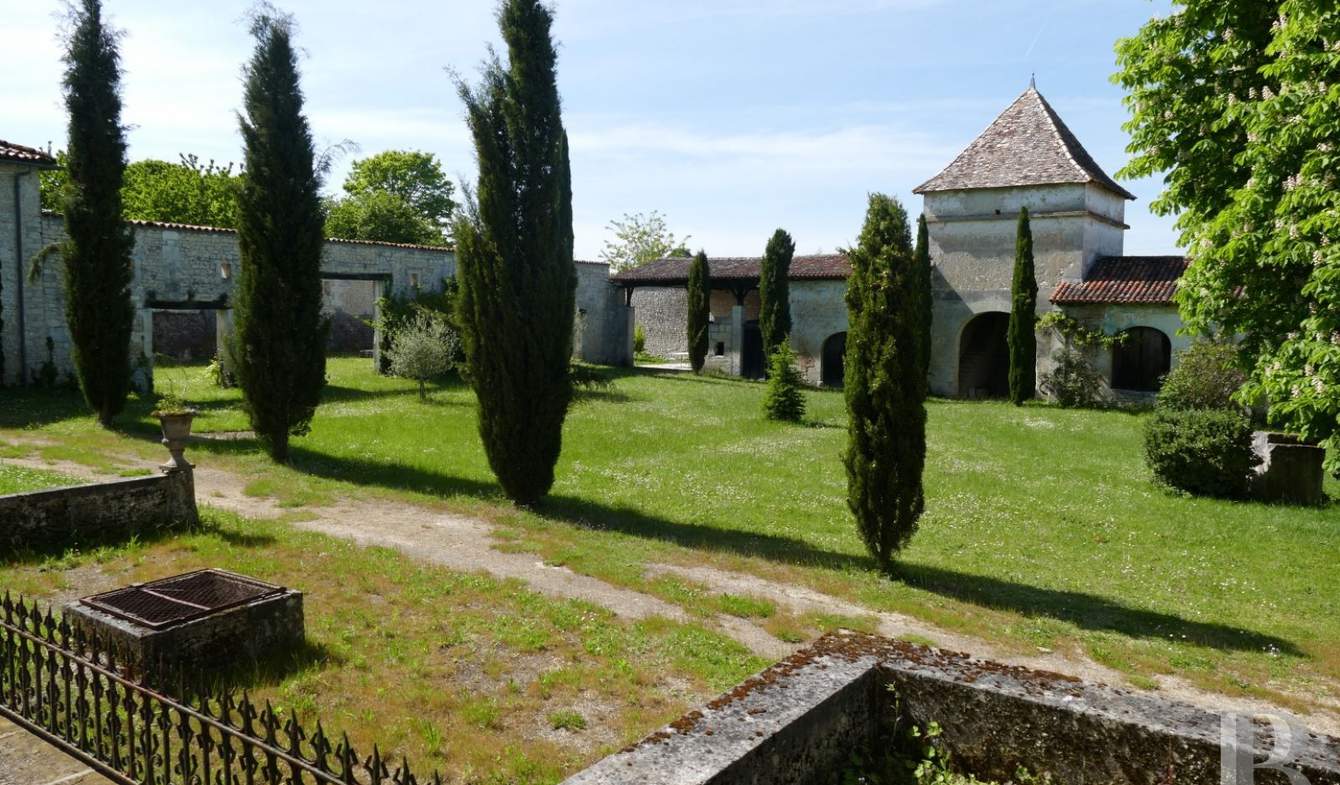