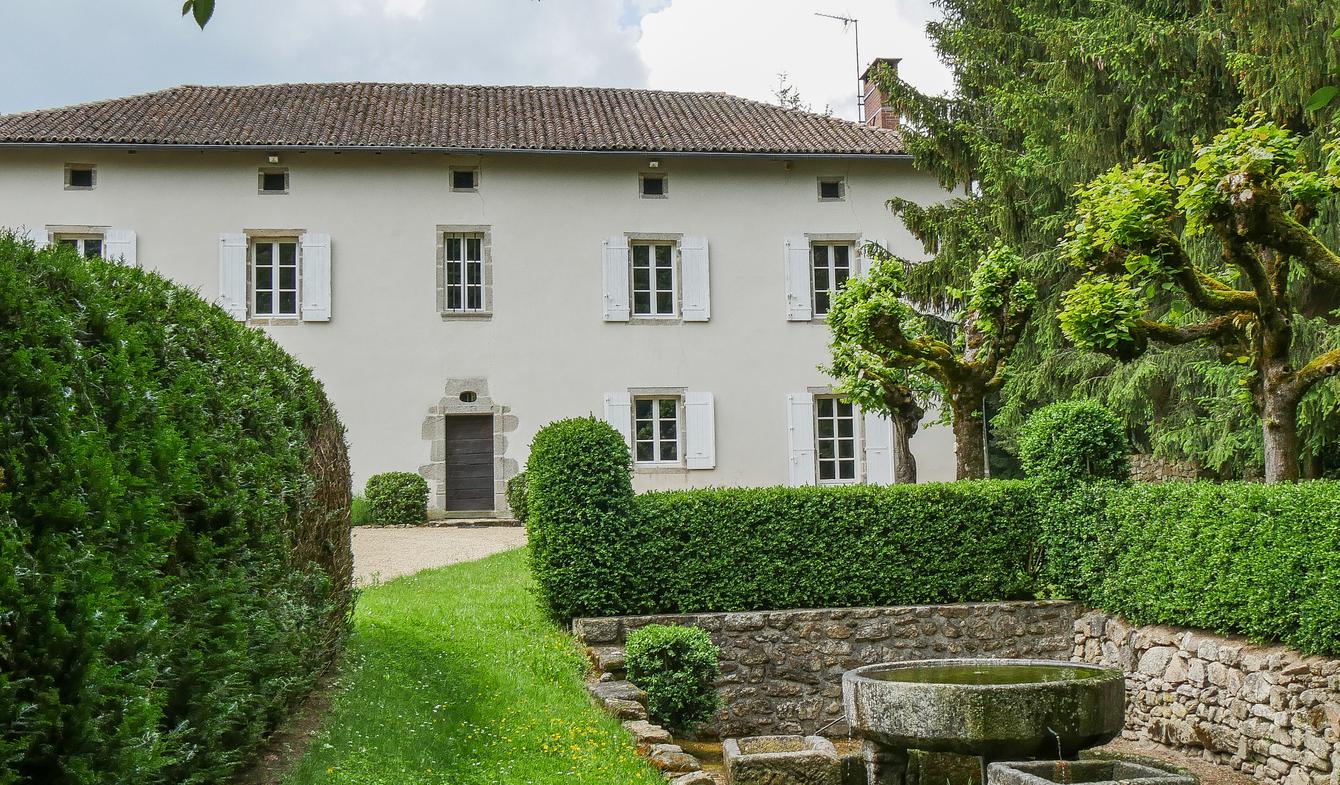 -North-west Limousin - House of the Seventeenth century, fully renovated and outbuildings in an environment very quiet, at the foot of the natural site protected of the Monts de Blond with 1.9 ha of park and wood. This site seems to be occupied since a time at tres reculee ; in effect a currency gallo-roman was retrouvee and its place names would have the name of the owner landowner of the time. Cite as lordship in the Fourteenth century, the logis current date in all likelihood from the second half of the Seventeenth century. Served by a small country road little frequentee, the access to the property is via a portal opening onto the courtyard facing the main body of the house orientated south-east. Barns in back of the bracket enclose the courtyard to the south, and rating fields. At the center, a beautiful fountain formed by a basin in the granite monolith is based on three pillars sculptes, she collects drinking water after a source for the whole year. The park is partly surrounded by walls, the other party has been terminated high fences ; the three portals that give access to the roads. The park was planted in most part of resineux, but also linden trees, cedar trees, or sycamores, while the little wood is mainly composed of chestnuts. Rating court, the facade of the main body of the house is organised in five travees two doors, with a floor and a floor under the eaves illuminates small windows carrees. Rating garden, the facade is percee two doors and the windows are so constituted asymmetric cover. Ravens -the remains of some fortification was based mainly symbolic at this time - remain at the corners north and south of the building along with two others who were likely to support a latrine rating south-west. The entrance is through a doorway cloutee has hinges and lock of iron forge, the frame is decorated with bands of granite surmontes an oculus. It opens on the entrance and its grand staircase ramp on ramp with steps in wood of a single piece are enchassees in the wall of echiffre, above a cellar semi-enterree. It is healthy, creusee in the tuff and houses the pump for the water supply. The ground floor consists of a stay on court in the north-east and a small sitting area guides rating park to the north-west ; a dining room in the south rating garden, a kitchen, a courtyard, storage room and furnace room between the two. Lovely fireplaces in stone adorn the pieces of life. The staircase leads to the half-storey with bathroom and toilet on the other. Upstairs, the landing opens on to four main parts ; two-purpose rooms distribuees by a corridor in the south coast and areas of work that can be converted into rooms to the north. Floors old as well as fireplaces agrementent the decor. Of the half-bearings serve a bathroom and a toilet, as the floor below. The attic is organized in two major parts which are symmetric to either side of the final level, with some lighting on board by one of the small windows carrees. The frame and the cover are very healthy, a vapor barrier has been raised without, however obstructs the ventilation of the attic. The frames have been completely redone recently, the windows are wood double glazing. The electricity, the plumbing, the boiler is recent also and work well. The house water comes from a nearby catchment and that of the fountain, a source of never dried up. A connection to the city water would nevertheless be feasible easily, because the network is near. The vast common of which were former stables, etables and barns processed in the workshop and storage spaces ; they are a very clean and healthy, the covers and frames are in good condition. The party rating is home to the tank has fuel. In the south-west, a former roof, which was destroyed form a space in home that can be used for a garden single or a small vegetable garden. No work has to envisage, livable now. Site close to area SCIENTIFIC and Natura 2000, no big nuisance. The district, which passes at the side of the property is very little frequentee and the small road in the cul de sac serves only the neighborhood and continues in the path of earth. Many trails to hike in the area, typical villages, equestrian centre. Living area : 334 m2 Barns : +--320m2 Land : 1ha 97 5km from a small town with shops and schools 30km north of Limoges at 20 min from the airport and 30 min from the motorway APrix : 442 800 euros agency fees included (which for 7.41% of agency fee).

Listings similar to this house, Limoges (87)

House with garden and terrace Limoges (87)

-North-west Limousin - House of the Seventeenth century, fully renovated and outbuildings in an environment very quiet, at the foot of the natural site protected of the Monts de Blond...

House from the 70s built with quality materials and very well thought out, it is set in the center of 5000m2 of flat grounds including a wooded building part. The house is 10min from the...

Beautiful apartment of 175 m2 located in the city center close to the galleries Lafayette Limoges in a quiet street. Moldings, woodwork, high ceilings, hardwood floors all the features...