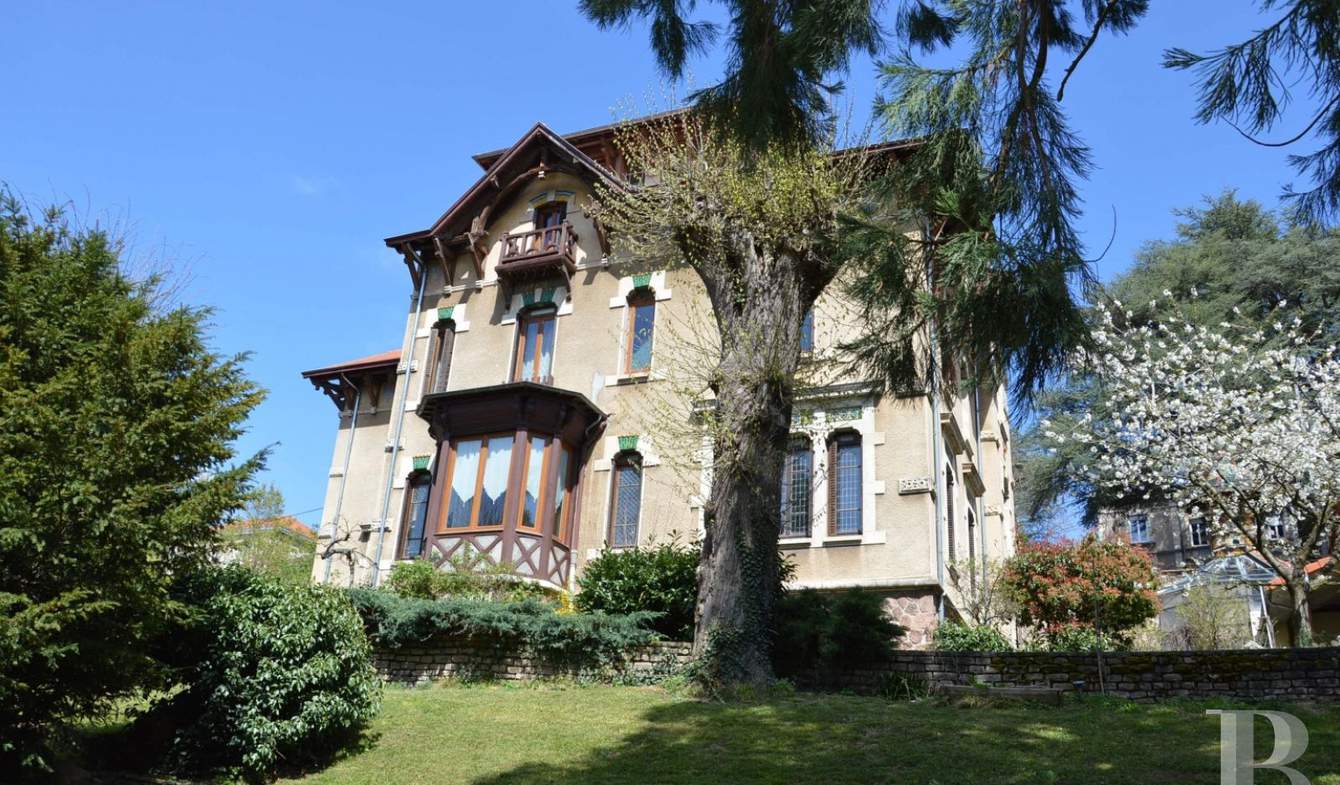 A mansion house and its designer aviary, exceptional Art Nouveau style heritage in the midst of Japanese parklands in a little town in the Green Beaujolais area.This property stands in the centre of a little town constructed on a rocky spur in the Green Beaujolais area. As of the 16th century, this town was a large market place for exchanging flax and hemp. It then developed during the booming textile industry up until the middle of the 19th century. Rich industrialists had mansion hotels built, rivalling their architectural features and giving this small market town a middle-class image. Following the decline of the textile industry, the region turned towards tourism. The Lac-des-Sapins (fir-tree lake) is just a stone’s throw away. The biggest artificial lake in Europe, it receives more than 200,000 visitors per year and offers numerous leisure activities such as swimming, sailing and horse riding as well as hiking and mountain bike trails. About 20 minutes from Roanne and 35 minutes from Villefranche-sur-Saône. Lyon and its TGV train station are an hour away. Amplepuis station provides direct train links to Lyon several times per day.This property comprises a mansion house and an aviary with a Japanese-style roof in parklands, spanning approx. 2,000 m², in the centre of a little town. The parklands feature a Japanese-style landscape, directly influenced by the Anglo-Japanese gardens that were fashionable in the 1900’s. This mansion house was constructed by a textile industrialist in 1897, at the height of the Art Nouveau era. It features decor resulting from this movement. The door lintels and windows on the ground floor are decorated with friezes with motifs of branches of flowers and cherry bay by ceramist and sculptor Emile Muller. The corners of the building have glazed facade ornamentation. Glazed terracotta tiles became extremely popular after the 1878 Universal Exhibition. This craze for multiple colours is scarce in the region; this property is one of the few bearing witness to it.The mansion houseThis mansion house, spanning four stories, has features reminiscent of Anglo-Norman villas. A bow window and triple windows adorn the south-facing facade which dominates the town and the garden. The rendered facades include multi-coloured and wooden features. Under the projecting roof, a painted string course represents oak, plane, horse chestnut, olive and laurel branches. In ochre and red outlines, leaves and golden yellow fruit contrast with a bright blue background. This decor is not related to the ceramic features that adorn the facades.Ground floorDouble wooden doors, with glazed upper sections, open into an entrance hall, closed by a second set of double doors with glazed, small paned fanlights. Once through this second set of doors, a large vestibule, with an antique style, sandstone mosaic floor, features an old, elegant glass roof. It provides access, via a corridor, to the reception rooms as well as to a study, a kitchen and a toilet. A door leads out to the garden. This property did not escape the trends of the 1900’s and mixes historic styles and inspirations. Consequently, the entrance hall faces a first lounge, illuminated via a bow window which frames two windows, featuring clear glass leaded lights with inlaid decoration. The room is heated by a marble fireplace, topped with a trumeau mirror, featuring a medallion adorned with musical instruments. The floor is covered with parquet flooring laid in a randomly matched pattern and the ceiling decorated with a rose as well as moulding. This first lounge communicates with the large lounge, featuring a triple window and windows with leaded lights identical to those in the first lounge. Painted panels above the doors are decorated in an 18th century manner. One of them represents a blindfolded Cupid with a quiver …

Listings similar to this house, Roanne

House with pool and terrace Roanne (42)

Pleasant house with outbuildings, located in the town of Riorges, 4 minutes from downtown Roanne. Built in 1965 with quality materials, this house has a swimming pool, 8 bedrooms, 2...

At the junction of the Lyonnais and Forez mountains, this large house was built in 2000 by companions using only noble materials such as oak for beams and doors, fine gold for fittings....

House with pool and terrace Riorges (42)

Located near the center of Roanne, in a residential area, beautiful town house renovated with quality services. It offers a living area of approximately 160m2 in excellent condition and... 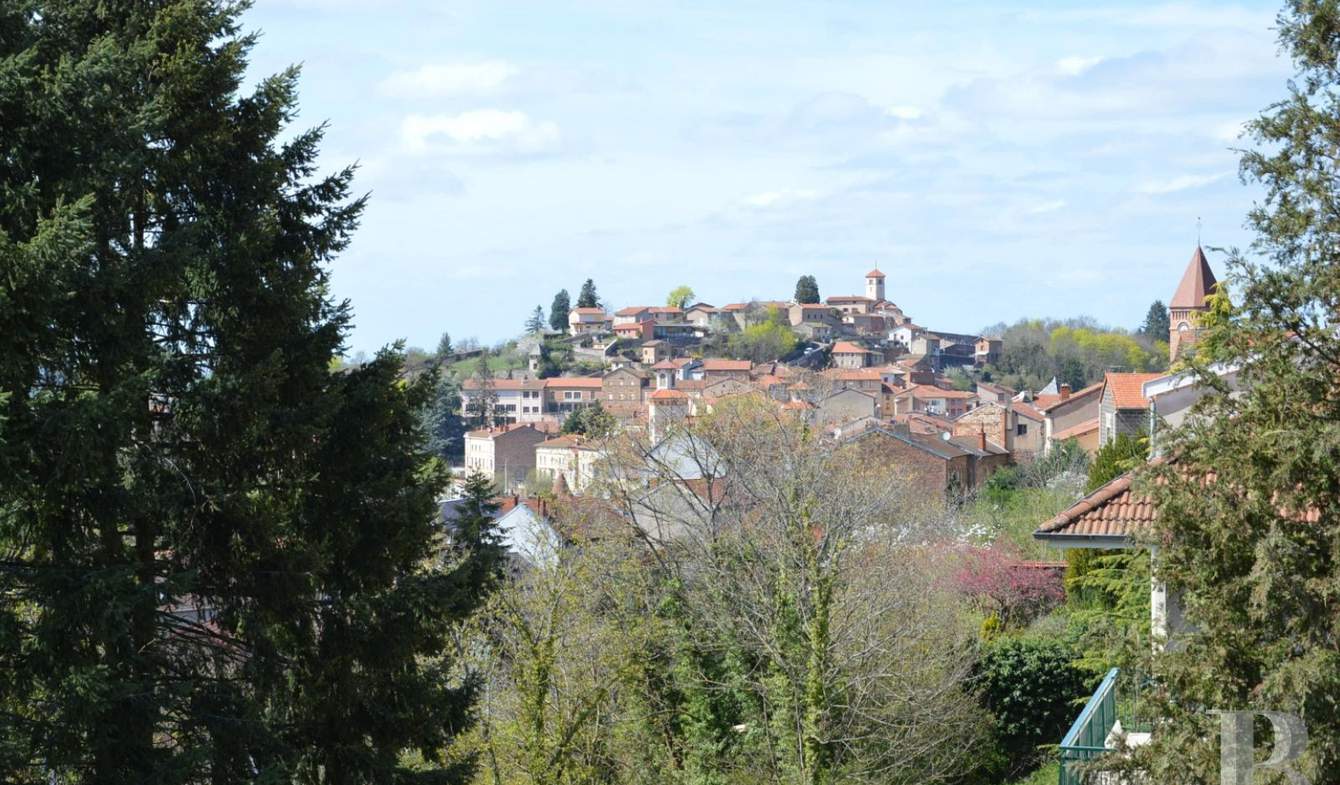