In the province of Anjou, in a charming village on the banks of the river Loire, house with its courtyard, garden and troglodytic caves.In a charming village backing on to the hillside along the river Loire. A Loire valley picture-perfect setting, embracing the river and its islands, limestone buildings and troglodytic caves, the vine and its art de vivre but also its rich history. Ten minutes from the town of Saumur and a full range of shops and services; the train station links it to Angers, Tours and Paris (TGV). Less than fifteen minutes from the A85 motorway.The village back lane running along the river passes in front of the side of the house and its entrance gates opening into a closed courtyard. The property faces the gates and comprises two buildings at right angles. It can also be accessed at the back of the house via a narrow path running through the hillside.The main houseThe house, dating back to 15th century, comprises one building situated perpendicular to the narrow street and another building set at right angles but separate from the first. A partially covered stone staircase with iron railings in between the two buildings links them and leads to both buildings on different levels. Built of limestone, they are two-storey above troglodytic caves and under the rafters. They are mainly covered with slate roofs. The property has recently undergone particularly delicate renovation works with the use of natural and eco-friendly materials. Modern day comforts have been added without spoiling the atmosphere of this old dwelling. The owners have done their upmost to keep the original features when they were of particular interest.Ground floorIn the main building, accessed from the first steps of the staircase, the dining room and two bedrooms one after the other each with their own shower room and toilet. Terracotta flooring and French style ceilings throughout. Limestone fireplaces in the dining room (with bread oven) and also in one of the bedrooms (painted). Wardrobe space in the same bedroom.In the second building, accessed directly from the courtyard, a wood storeroom and the former stables.First floorIn the first building, the landing leads to the lounge opening into two bedrooms both with their own shower room and toilet and another bedroom and en-suite shower room and toilet. French ceilings and terracotta floor tiles throughout except for in the lounge where there is a wood floor. Black marble fireplace and cupboard in the last bedroom.In the second building, a flat comprising a living room (with kitchen area), bedroom, shower room and toilet. Terracotta floors and French ceilings throughout. Limestone fireplace and cupboard in the living room.The landing at the top of the stone staircase also gives access to a small village path at the back of the house and also to a wooden staircase leading to the attic.Second floorOn the last floor, the two buildings have been connected. On this level, on one side of the wooden staircase, a large living room with (with kitchen area). On the other, a corridor leading to two bedrooms, a shower room with toilet and access to the attic. The living room also opens out into the small village path at the back of the house. The attic is hooked up to water and electricity supplies.The outbuildingsThey comprise a wood storage room and former stables on the ground floor of the second building and two sets of troglodytic caves.The first cave runs the length of the house. Both caves communicate, they can be accessed either directly via the courtyard or via the former stables. Water well in one of the caves.The second cave, is at a different level, above the garden and in the hillside. It can be accessed via a small village path and has an …

In a village to the south of the river Loire, a 15-century home with guest house, garden and underground courtyard. In a village among vineyards, near the shops and amenities of Saumur,...

House with pool and terrace Gennes (49)

It is in the village of Gennes-Val-de-Loire not far from the river that this house can be found with a living area of ??approximately 315 m², a swimming pool and a small apartment adjoin... 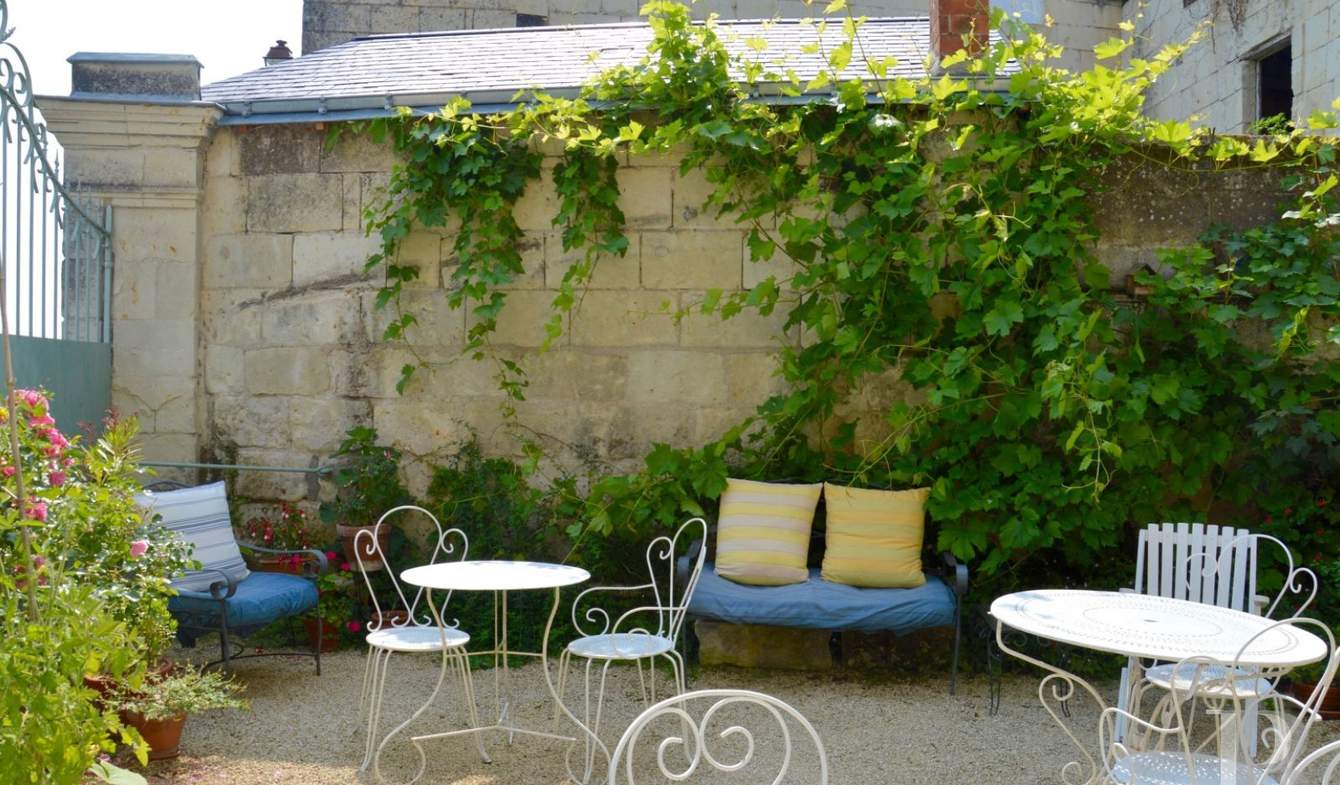