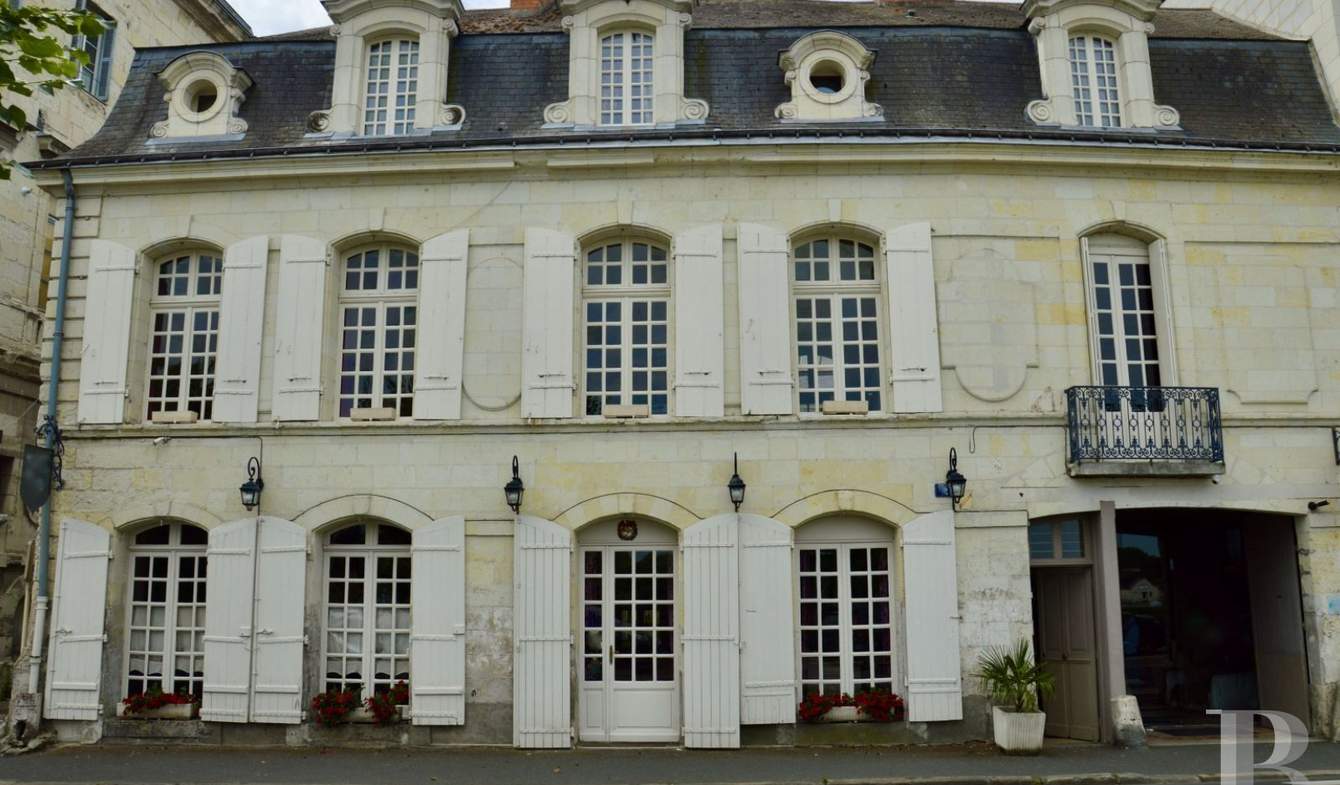 An old, 18th century coaching inn, with its enclosed courtyard, in a town on the banks of the river Loire in the Anjou region.On the banks of a river, the bed of which is very wide at this point. Very near to the historic centre of a town with a rich heritage, including an impressive royal castle, numerous mansion houses and some outstanding religious edifices. Near to well-known vineyards and numerous delightful, Loire Valley villages. The town, with an excellent tourist trade, has all shops and amenities including a train station with links to Angers, Tours and Paris. It is also near to the A85 motorway.This old coaching inn stands on a corner formed by the banks bordering the river Loire and a street leading to the town centre. Its main facade looks directly out over the banks and consequently faces the river; the facade running alongside the street leading to the town centre overlooks the enclosed garden of an old mansion house. The building is, in fact, composed of three sections forming a U-shape and is closed on its fourth side by the adjoining gable of the neighbouring house. A paved, wooded courtyard, set inside the space delimited in this way, is overlooked by a large number of the rooms in the house. The latter is spacious and its layout is still that of the old coaching inns where travellers could stop for food and lodging.The residenceConstructed from freestone, this residence spans three levels, one of which is under the rafters. It is topped with a slate, Mansard style roof, featuring roof dormers also made of freestone. Along the main facade, carriage doors topped with a balcony provide access to a porch, leading in turn to the courtyard and to a back entrance, housing a stairway leading directly to a wide balcony corridor which, on the first floor, dominates the interior courtyard.Ground floorImmediately following the entrance porch on the main facade: two reception rooms and a toilet. Then, on the street facade: a hall area with a first stairway and, following on from one another, a kitchen, a back kitchen, a cold room, a linen room and a 2-car garage (approx. 77 m²). And lastly, in the third section of the building, a hall area with a second stairway and a room currently taken up by a spa bath. Terracotta floor tiles; exposed ceiling beams in the reception rooms. One of these two rooms as well as that housing the spa bath have a freestone fireplace. The first stairway is also made of freestone; the second, of freestone and wood, with wrought iron railings.Mezzanine floorThe second stairway goes to a landing, providing access to two bedrooms, each with a shower room and toilet.First floorOn the main facade, the first stairway provides access to a landing leading to a flat and, on the street facade, to a hall area opening into a bedroom, with a shower room and toilet. Wainscoting in the bedroom and parquet flooring. The flat comprises an entrance hall, leading to a toilet, a bedroom, with a bathroom, and a living room. Adjoining the latter is a lounge. Parquet flooring throughout. The bedroom and the living room have black marble fireplaces; the lounge, a freestone fireplace. The lounge and the living room open on to the balcony corridor dominating the interior courtyard.The second stairway goes to a landing providing access, on one side, to an exercise-massage room and, on the other, to a flat comprising an entrance hall, a bedroom-lounge and a shower room, with a toilet.Second floorThe first stairway goes up to a landing providing access, on one side, to a bedroom, with a shower room and toilet, and, on the other side, to a corridor leading to a cupboard with a water supply point and three bedrooms, each with a shower room and toilet. The beams of the roofing framework are exposed in all these rooms. Terracotta floor tiles on the …

This sumptuous nineteenth century castle of nearly 800m2 seems to have always found its place in the heart of a green sheet of nearly 17,000m2. It is surprising by its majestic tropical...

Saumur, a listed Château (ISMH), built 1878, with 800sqm of living space over 4 floors, including 11 bedrooms, the majority with new luxury bathrooms, a huge 'Verrière' of about 100sqm...

This magnificent manor of about 330 m2 on a 1.8 hectare park finds its place in the heart of the city of character Savennières, known for its secular vineyard and its remarkable... 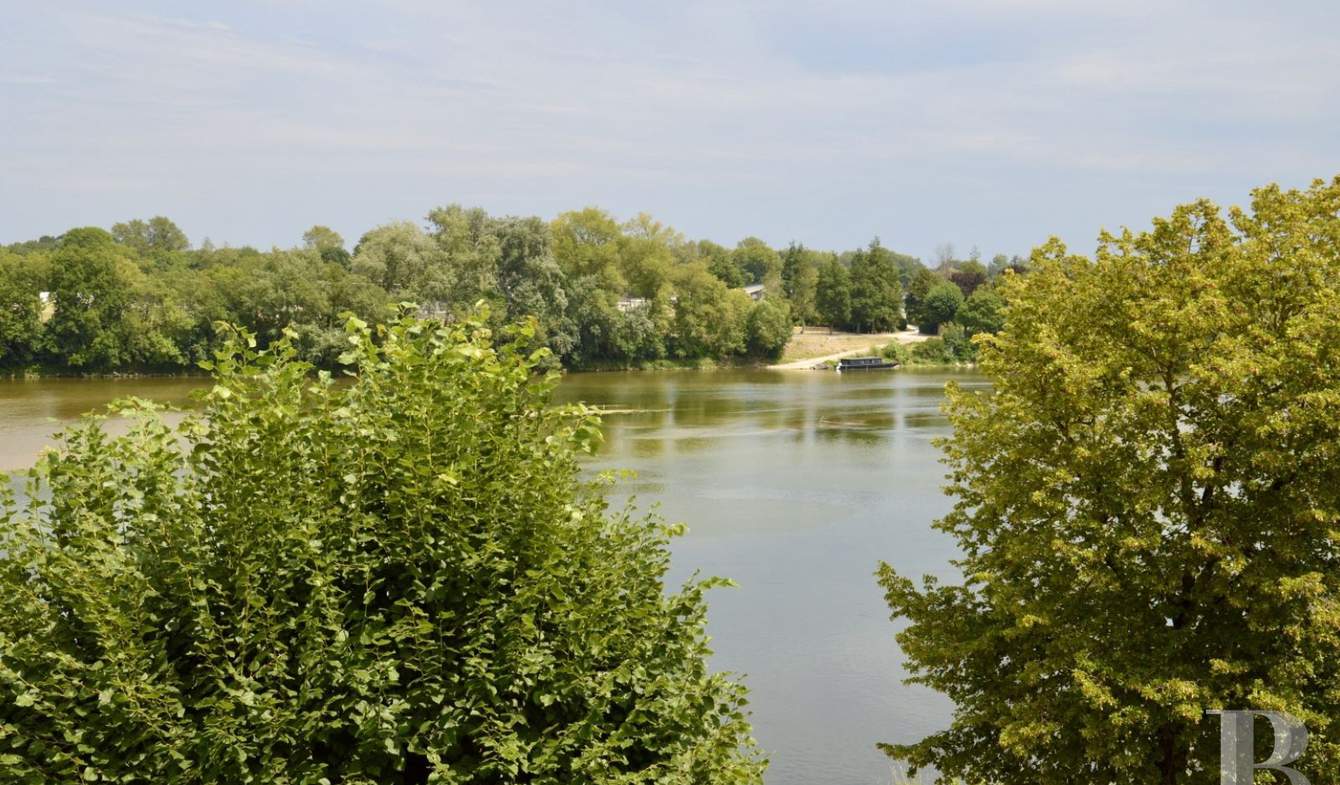