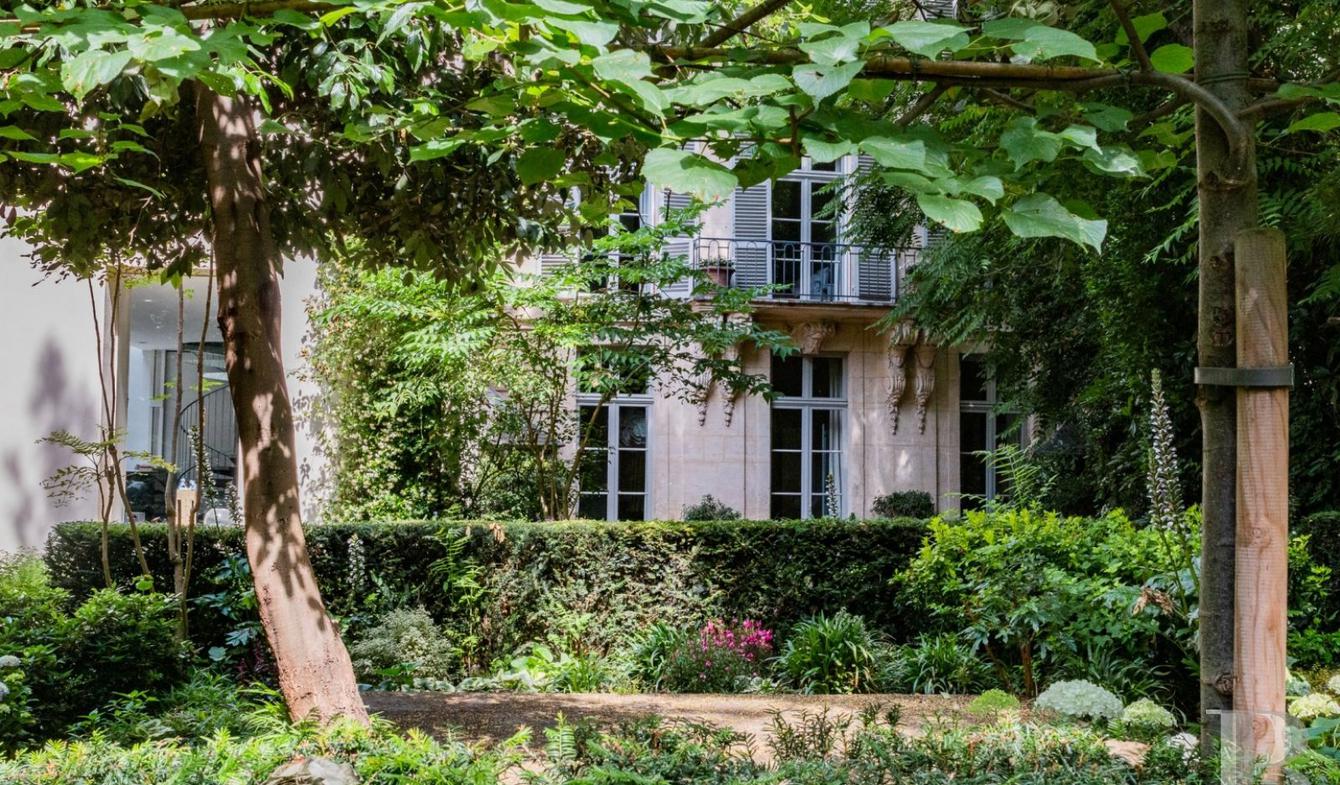 A Regency style mansion house and its garden in the Latin Quarter between Place-du-Panthéon and Luxembourg Gardens.This mansion house is reached via a listed, pure Regency style rental building, the beautiful symmetrical facade of which is centred around an extraordinary balcony. Carriage gates lead to a paved courtyard. At the end stands this mansion house, with three bays on four levels under attic space; it too has French Historic Monument classification. It was built in 1718 by architect Claude-Nicolas-Lepas-Dubuisson. Constructed from dressed stone, it is perfectly symmetrical, with a central, raised entrance door reached via a few steps. An elegant, sober facade, on the courtyard side, is decorated with mascarons and corbels. Exposed stone quoins, with elaborate pointing, at both ends complete the facade. Indented, flat moulding frames the slightly curved, ground floor windows, with their small panes, as well as the central bay. The top floor features three large roof dormers set in the slate roof. The garden facade, also soberly sculpted, is enhanced with a balcony on the first floor and slatted shutters. A 19th century, 2-storey orangery, enhanced by an atrium and standing at right angles, is connected to the ground floor of the mansion house. On the garden level, a large kitchen and, above, a study dominate the garden. This extension flanks a parterre, spanning approx. 100 m², paved with stone laid opus incertum. It precedes a 400 m² garden, with tall trees and vegetation, enhanced at the end by an arbour. Each interior level has a particular purpose: a recording studio, a television room, a cellar and a laundry room in the basement, reception rooms on the ground floor, a suite and master bedroom on the first floor, on the three upper floors are two bedrooms, each with its own dressing room and bathroom, illuminated via windows. The main stairway is listed. A lift provides access from the basement up to the third floor.Inside the mansion houseThe entrance hall houses a stairway, the five first steps of which are made of stone, then typical of the period, the rest have solid wood nosing and hexagonal terracotta tile treads. The flights of steps, protected by elegant wrought iron railings, go up from the ground floor to the third floor in the central bay of the mansion house, pleasantly illuminated via the facade windows on the courtyard side. A lift provides access all the way up to the third floor from the basement. The ground floor is given over to reception rooms which provide access to the garden. The first floor is designed as a suite. On every floor, the bath and shower rooms are illuminated via windows overlooking the courtyard. Each of the upper floors comprises two bedrooms and a dressing room. The basement houses the machine rooms.OrangeryConnected at right angles to the mansion house via the ground floor, this extension, resembling an orangery and dating from the 19th century, spans two levels and backs on to the party wall via an atrium. This area, spanning more than 60 m², houses a resolutely contemporary, fully fitted kitchen. With a polished concrete floor, a vast eating area is enhanced with a fireplace. It is widely illuminated via numerous openings, one of which provides access to the paved parterre in the garden. Light coming in through the roof atrium is cleverly directed downwards by the upper floor. A wide, galvanised steel, spiral stairway goes upstairs to a large study area that dominates the garden.The gardenThe central, through entrance hall provides access to the garden. The latter spans approx. 400 m², although it was bigger and adjoined that of the Town Hall in Place-du-Panthéon at the time the mansion house was constructed. The first section, spanning more than 100 m² in front of the mansion house and workshop facades, is paved with …

Price details of this house with terrace:

This 500sq.m 18th century mansion is listed at additional Historic Monuments listing. We access to the mansion by a stoned courtyard in front of an ancient facade. In the main wing of...

This sublime 18 th century private mansion in the heart of the Sorbonne district is a masterpiece of French heritage with its listed facade and staircase. Nested in bottom of court, in...

Seine-Village d'Auteuil-Paris 16th century. In the heart of a secured Private Villa, this completely renovated property situated in a landscaped garden of 800 m2 consists of a Master... 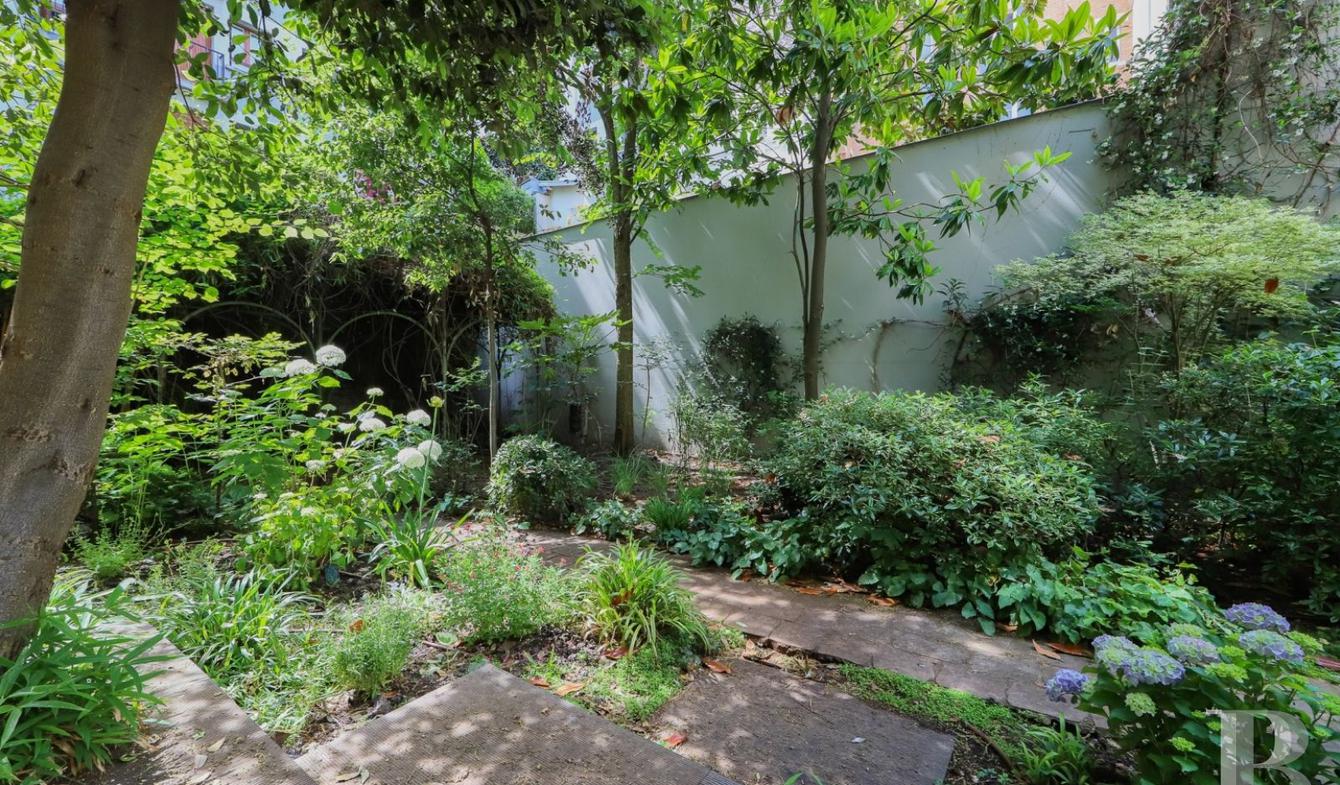