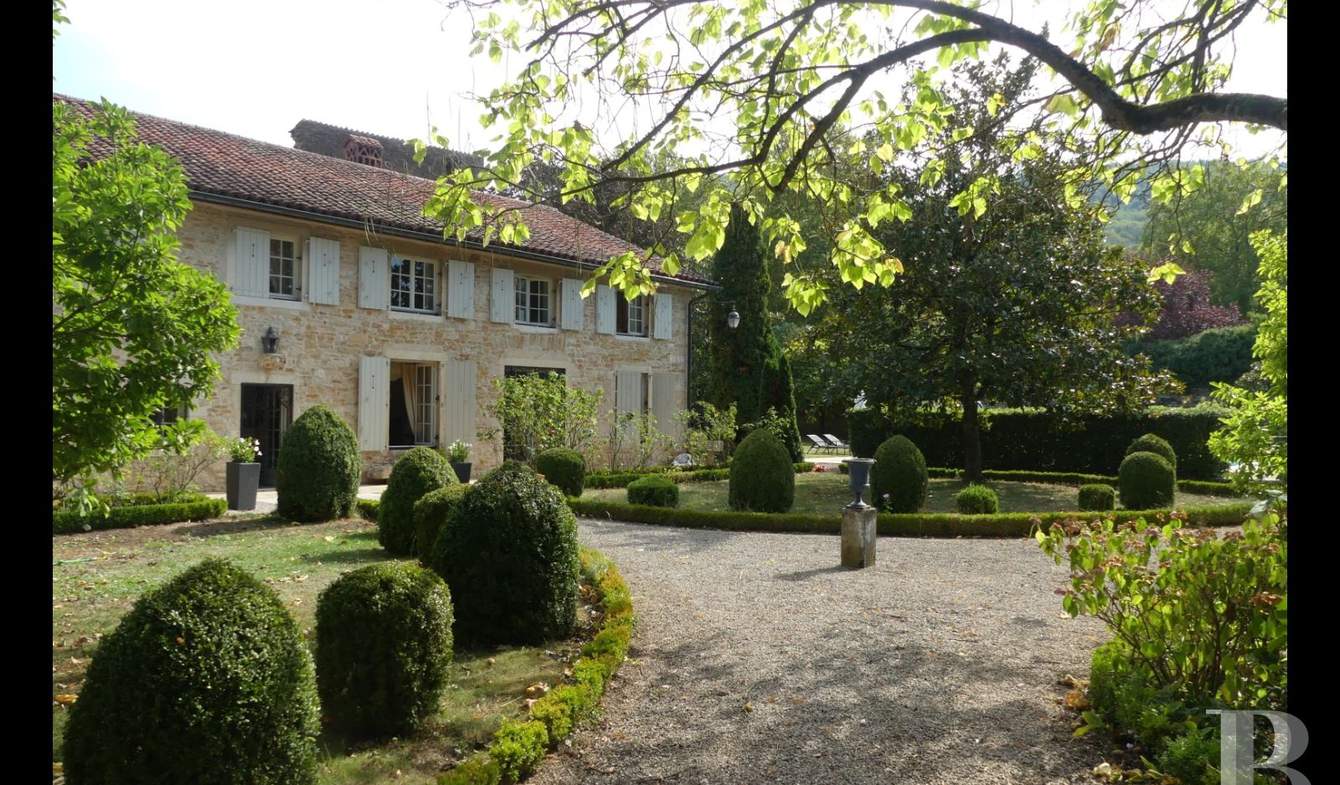 A listed property, with a square tower and a section of 12th century ramparts, in an old castle town forming a border between Burgundy and La-Franche-Comté.The market town is in the south of Burgundy, at the foot of the Revermont mountains, an hour from Lyon, scarcely any longer from Geneva and 20 minutes from an airport with flights to London, Bastia, Porto and Marrakech. It has been a strategic site throughout history, having been a border and, much later, a resistance stronghold.This property, protected by its stone walls, is barely visible from the street. Only the rampart and the square tower, notably the remaining, 12 m high wall, can be seen by passers-by. Three different entrances provide car access to the property: the large wrought iron gates, flanked by stone pillars topped with pinecones, the gate on the ground floor of the tower and the wooden garden gates which are extremely practical for the upkeep of the parklands. The easiest entrance for pedestrians is the wrought iron gate set in the stone wall or the only door of the house opening on to the street. This medieval, studded, wooden door is topped with a lintel featuring two ogee arches. The coats-of-arms that were on the keystone have been erased.This property gives the impression of being a hamlet all on its own amidst its stone walls with a large house, outbuildings, a tower, paved courtyards, narrow streets, arches and varying levels.In the main courtyard laid with square paving stones, alongside the perimeter wall, a large atrium is used as a conservatory for citrus and laurel trees. It precedes the rampart and its square tower. A second paved courtyard, down a few steps, between a projection of the house and the rampart, forms a terrace, superbly sheltered from the sun and the wind. This property’s new owners will appreciate its discreet parklands which are out of sight of the courtyard and can only be seen once through the passageway in the rampart closing the terrace. The parklands include a swimming pool on a corner of the property, beyond a lawn and tall trees. A French formal garden, on the other side of the house is bordered by boxwood.The houseThis stone house has a gable roof. The typical Saracen style chimney stacks have square bases and comprise two levels of openings, covered with overhanging eaves. This building was most certainly originally a barn and stables. The stone facing, the arched openings protected by wrought iron railings as well as the Spanish and French style doors demonstrate the excellence of the restoration works from the outside. The house spans 3 levels; the top floor is an attic under the roofing framework and could be converted.Ground floorThe door opens into a little lounge set out around a fireplace with a closed-hearth fire. A vaulted alcove discovered during the works has been transformed into a showcase. The room is illuminated via a window looking out over the street and a small window overlooking the large courtyard. The floor is covered in marble as are all the floors on this level. A wide corridor then leads to a laundry room, followed by a fitted kitchen, both closed by superb old Spanish style doors.The rounded room opens on to an outside terrace, sheltered by the rampart. A small landing, with a cupboard, provides access to a state room, with its ivory-coloured French ceiling, impressive fireplace, exposed stone walls and marble floor tiles laid in a chessboard pattern. A sort of balcony corridor, with a beige marble floor, running the length of the lounge and a level raised by three steps, is closed by highly-wrought iron railings. A French window opens on to the French formal garden. The small lounge-library also has a door opening on to the garden. This harmonious room features marble flooring, wall panelling and bookshelves as well as eggshell coloured …

PLACE SATHONAY - Located on the top floor of a 19th century building, this bright duplex offers beautiful volumes and a triple exposure not overlooked. The 218 sqm consists of a large...

Quincié en Beaujolais sector, a haven of peace for this stone estate built in a real green setting. It consists of a main house and several other accommodations organized around a...

House with pool and terrace Lentilly (69)

LENTILLY area, Close to all amenities, beautiful villa on full basement, built in a peaceful green setting. Built in 1986 and enlarged in 2000, it deploys its reception rooms on the...

EXCLUSIVE - CREPIEUX sector. This 250 sqm house, renovated in 2019, is composed of a large living room with high ceilings and a magnificent view of the city of Lyon, a bedroom is also... 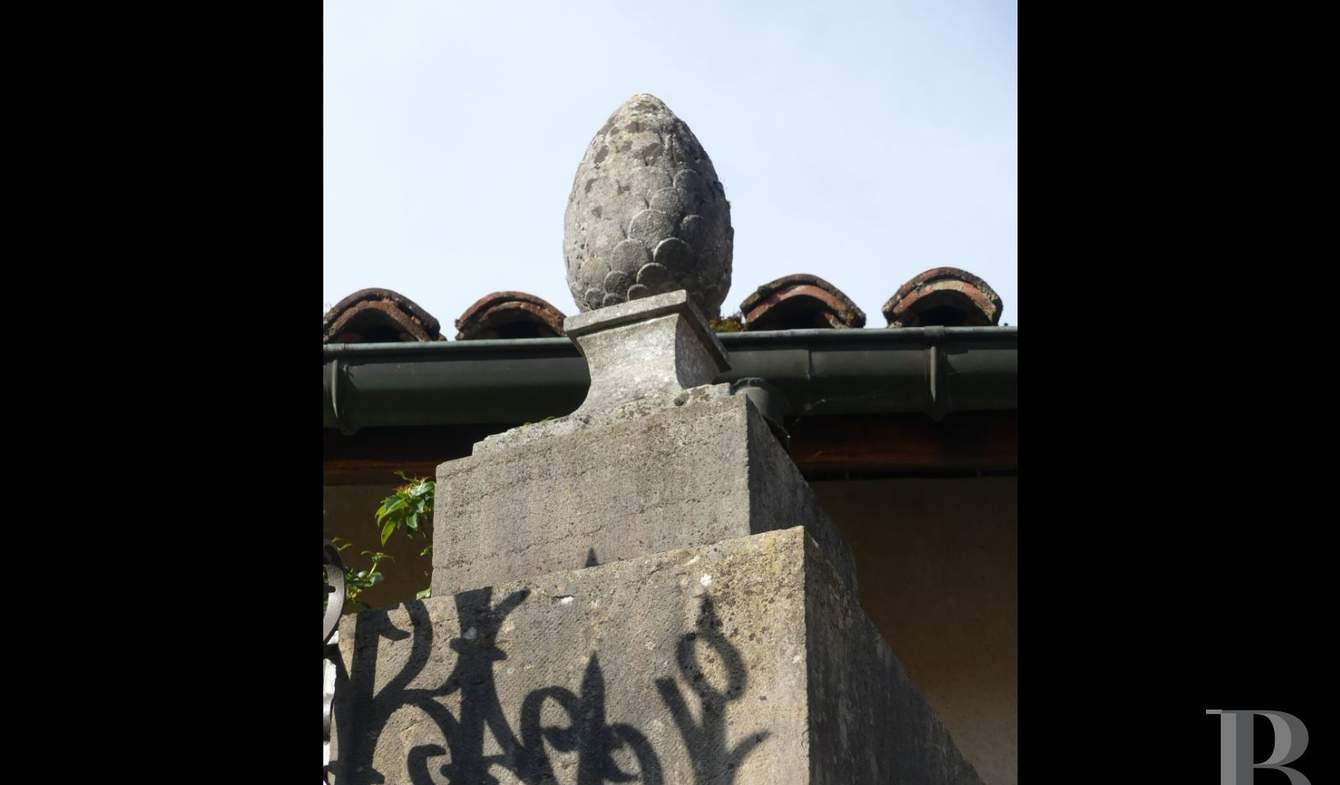