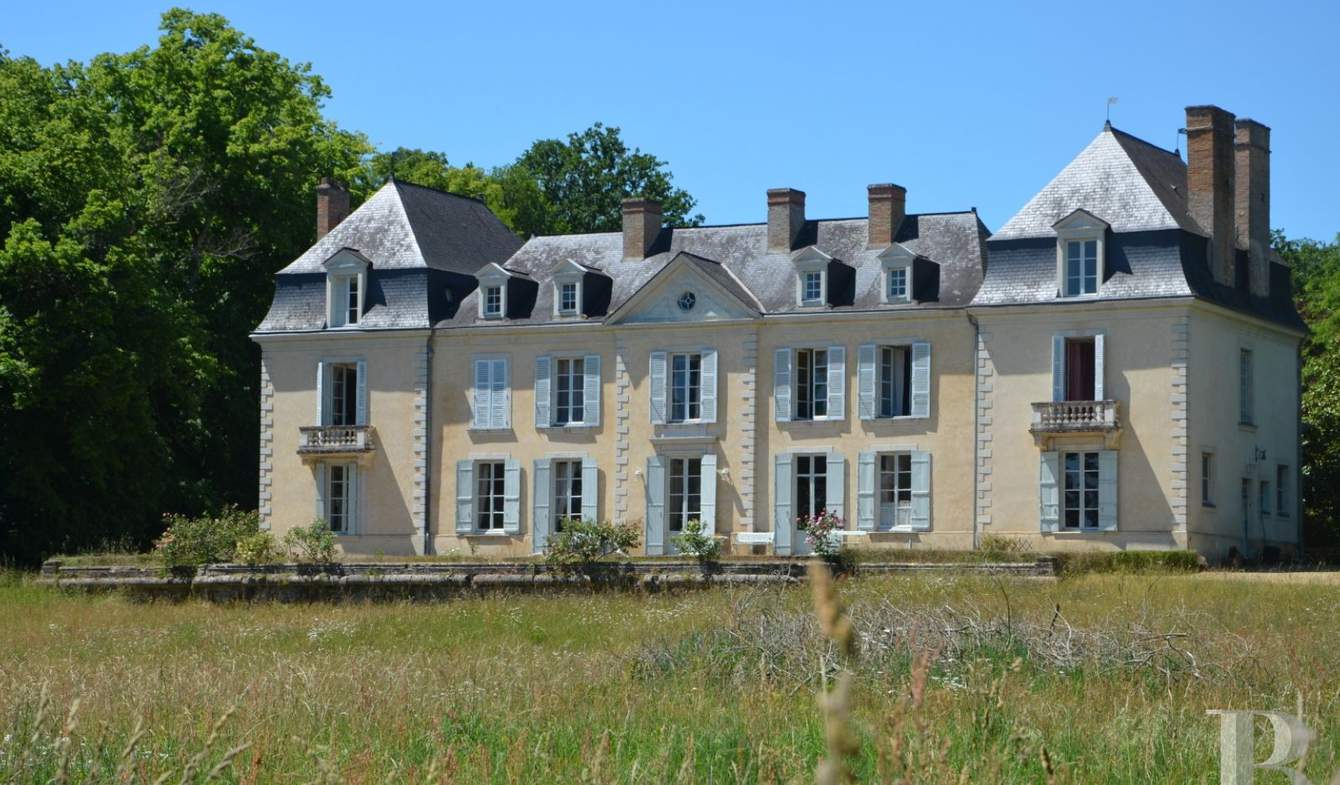 In the north of the Anjou region, amongst forests and bocage countryside, an 18th century residence and its renovated outbuildings in almost 12 ha.45 km to the north of Angers, 250 km from Paris. 10 km from an interchange on the A10 motorway. 25 km from an aerodrome as well as a train station with 75-minute links to Paris-Montparnasse and good TGV train links for Paris, 2-hour links to Roissy-Charles-de-Gaulle, to Lyon and Lille-Europe to London in less than 3 hours and 1½-hour links to Nantes.Less than an hour from the Loire Valley (Anjou region) and Le-Mans, with its old medieval, Plantagenet town and its miscellaneous events (“Cours et Jardin”), its Le-Mans 24-hour racing circuit and its internationally renowned endurance car race, as well as the Porsche-Experience-Centre driving school and the International Le-Mans-Karting go-cart track. 30 minutes from a golf course.Less than 10 km from a little town with a rich historic past and all amenities.The estate spans a little over 12 ha composed of grasslands to the south-east and predominantly of woods to the north-west. Two long driveways provide access to the property which is, in fact, completely immersed in its natural setting. An elegant chateau is the first to come in to view, followed by several buildings forming a courtyard. Beautiful stables constitute the chateau’s facade.Once a country house, this east-west facing residence was constructed in the 18th century under the supervision of master builders and carpenters. It was extended in the second half of the 19th century when a wing was added to each end. Spanning approx. 500 m², it houses reception rooms and eight bedrooms, each with its own bath or shower room and toilet. Nearby stand a long outbuilding, former stables and garages. Upstairs, a flat and, forming a courtyard, a caretaker’s cottage as well as an old farmhouse, all three renovated and habitable.The estate is composed of a wood, spanning approx. 6 ha, 4 ha of grasslands, an orchard and old moats.The chateauThe main, rectangular building is enhanced at each of its ends by two protruding pavilions. The chateau spans three levels, built over a cellar. The roofs are covered with slate. The lime-rendered facades feature numerous, regularly spaced openings. A gravel esplanade extends the length of the facade and around the chateau. It is laid out as a terrace at the rear of the building. A view to the north-west takes in the woods and a forest path.Ground floorThe front door opens into an entrance hall, lined with panelling and featuring its original cement floor tiles. Double doors provide access to a large lounge and a conservatory that open on to the back terrace. They precede another lounge, with an adjoining library. Facing the entrance hall, behind large glazed doors, is a dining room. Another entrance hall houses a stairway, going upstairs. A corridor leads to miscellaneous utility rooms and a kitchen. A large hunting room is enhanced with a fireplace. High ceilings, with moulding, reinforce a feeling of spaciousness and enhance the double doors of the various rooms. The state rooms are spacious and bright. They open on either side on to terraces and have clear views over the forest estate and the flower-filled grasslands. They are decorated with their original, 18th century wall panelling and feature old fireplaces. The ceiling with moulding in the large lounge blends beautifully with its wonderful herringbone pattern parquet flooring which is replaced by cement floor tiles in the dining room and the entrance halls. A back stairway also goes upstairs.First floorThe wooden stairway, with its intermediate landings, goes up to a wide landing. The latter opens into a gallery with a toilet, followed by a corridor leading to three bedrooms, each with its own bathroom. Another corridor, …

Ref. 3677 Charming chateau for sale in Sarthe department Located 170km west of Paris by motorway, or 55 minutes by train TGV, this charming 19th C. property benefits from the proximity...

A 17th century castle and its outbuildings, set in a dominant position, in almost 30 ha of rolling grasslands and woods to the west of Le-Mans. On the outskirts of Le-Mans, less than 20... 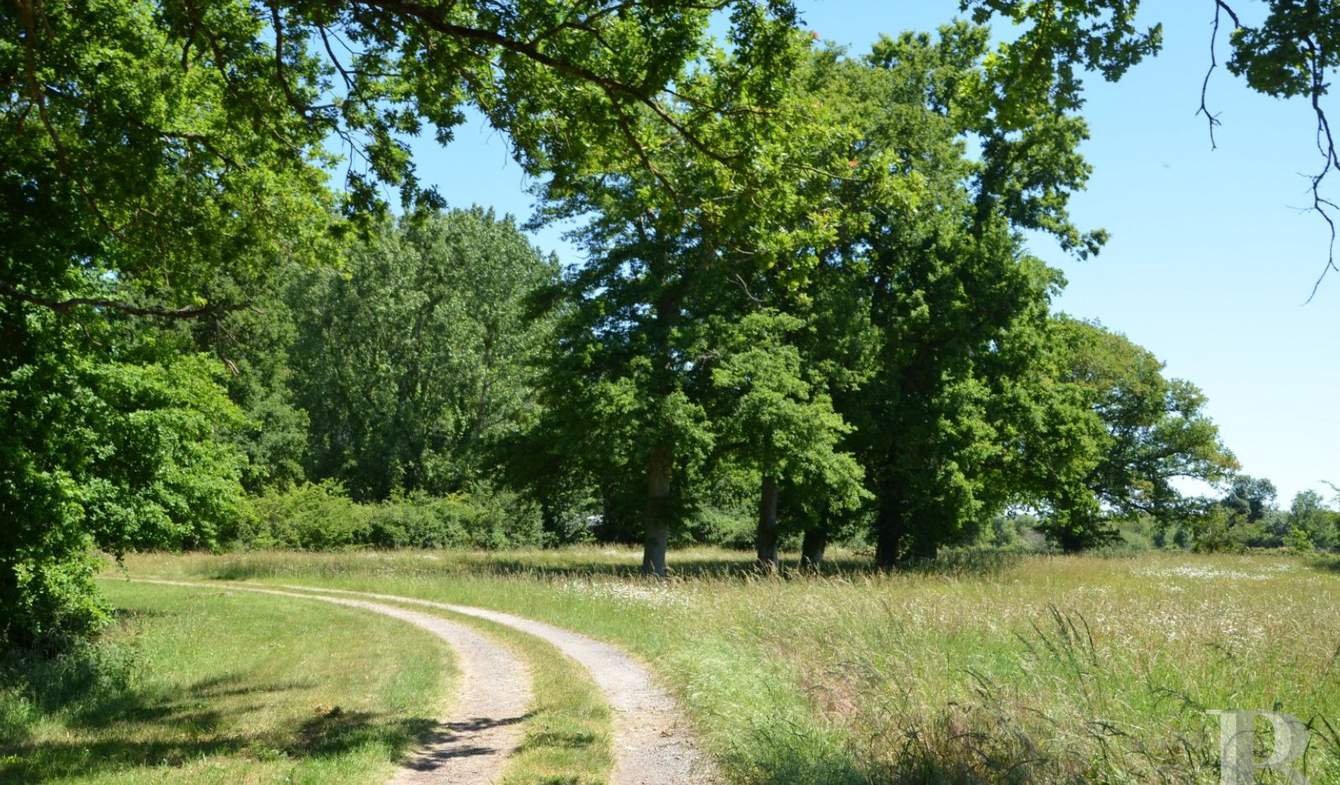