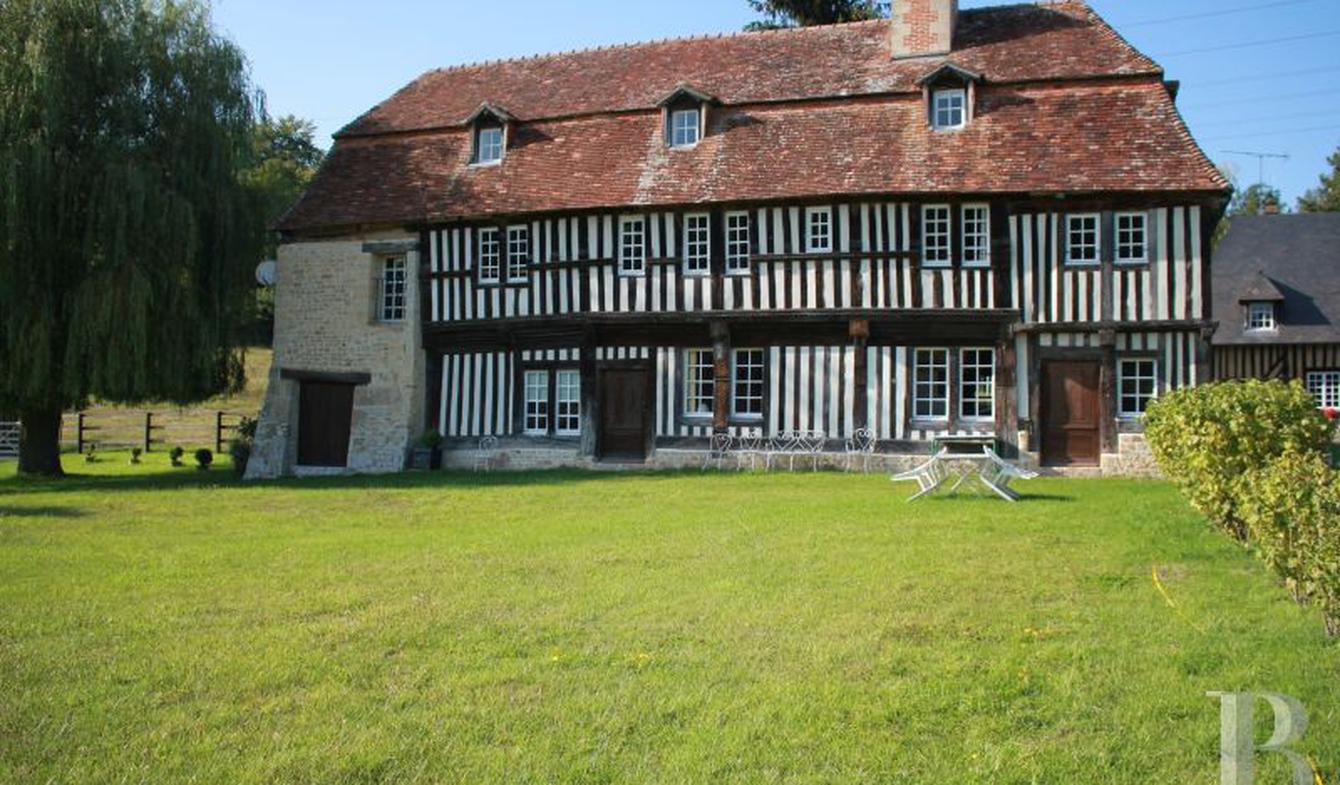 In the Auge region, 25 minutes from Deauville, with more than 17 ha, a 15th century manor house, its press-house and its outbuildings.This manor house is surrounded by French bocage countryside, with meadows and copses, valleys and villages characteristic of the Auge region. A typical village, with all local shops is less than 2 km away. A large town, with a train station and all infrastructures, is 18 km away. The train line provides 1Ÿ-hour links to Paris (210 km to Paris via the A13 motorway).The nearby Nacre, Fleurie and Grâce coasts are between 20 and 30 km away.Wooden gates on a hillside open on to a lane going down towards the bottom of a valley. Lined with apple trees, it stops in front of the manor house and the old stables, renovated for use as a guest house. The manor house, its press-house and its distillery delimit a large, grassy courtyard. A tennis court is laid out behind the distillery. The manor house and its outbuildings are surrounded by grasslands with their apple trees. All the buildings are constructed from half-timbering, built on a stone and flint lower section. They face south, looking out over the bottom of the valley, with a river running through it.The residenceThis manor house is a Seigneurial residence, composed of three sections. A square, stone tower, vestige of a fortified farm, aligned with a central section featuring corbelling, followed by an extension which could have been where carriages were kept. The half-timbering is supported on truss beams and aprons. The first level on the south facade features seven windows and three doorways, one of which in the square tower has double doors under a wooden lintel. The second level features eleven windows, seven of which adjoin the apron. The Mansard style roof is covered with tiles. It features three roof dormers on each of the long sides and one on each of the gable sides. The rear facade features nine windows and one doorway. An outside stairway leads to an independent house.Ground floorThis level is continuous. The floor is paved with old, square terracotta tiles. Beams and joists are exposed. A doorway opens into a very bright kitchen. A monumental stone fireplace separates it from a living room, leaving a passageway on either side. Adjoining the latter, a second stone fireplace enhances this first lounge, in which a wooden stairway goes upstairs. A stone lower section, topped with open half-timbering, separates two living rooms.First floorThis level spans two-thirds of the surface area of the manor house. The other third is taken up by the independent house. The stairway leads to a corridor which provides access to four bedrooms and two bathrooms. A spiral stairway, concealed behind a wooden door at the end of the corridor, leads to the converted attic space.The attic spaceThis continuous attic space has a sloping ceiling. The floor is laid with parquet flooring. Beams and trusses are exposed. Five roof dormers illuminate this area, separated in the middle by the double, stone chimney flue for the fireplaces. A half-timbered wall features a small wooden door, providing access to the independent house.The independent houseThis independent house is contained within the section taken up by the square tower. An outside wooden stairway behind the manor house provides access to a main room, with a kitchen area and a shower room. A stairway goes up to a room with a sloping ceiling.The old stablesThe hip, slate roof features two roof dormers. The building can be accessed via three doorways. An area where carriages were kept takes up one of its ends.These old stables ...

Listings similar to this manor, Bonnebosq (14)

5km (3 miles) from Deauville and the sea, in a highly sought-after area of countryside, this superb half-timbered, stone and tile-clad 18th century press comes with annexes on an 8,700m²...

Barnes is advertising this sublime 17th century mansion in Caen stone located at the gateway to Bayeux and just a few miles from the D-Day landing beaches (6km - almost 4 miles - from...

A delightful, half timbered Normandy Manor House, originating from the XVIIth and XVIIIth centuries, nestled in a small Hamlet with extensive views over a well preserved Valley. ...

Magnificent contemporary thatched cottage on one hectare of landscaped grounds in the hills near Pont l'Evêque. Presenting a total of 250 m² of living area, it comprises, on the ground... 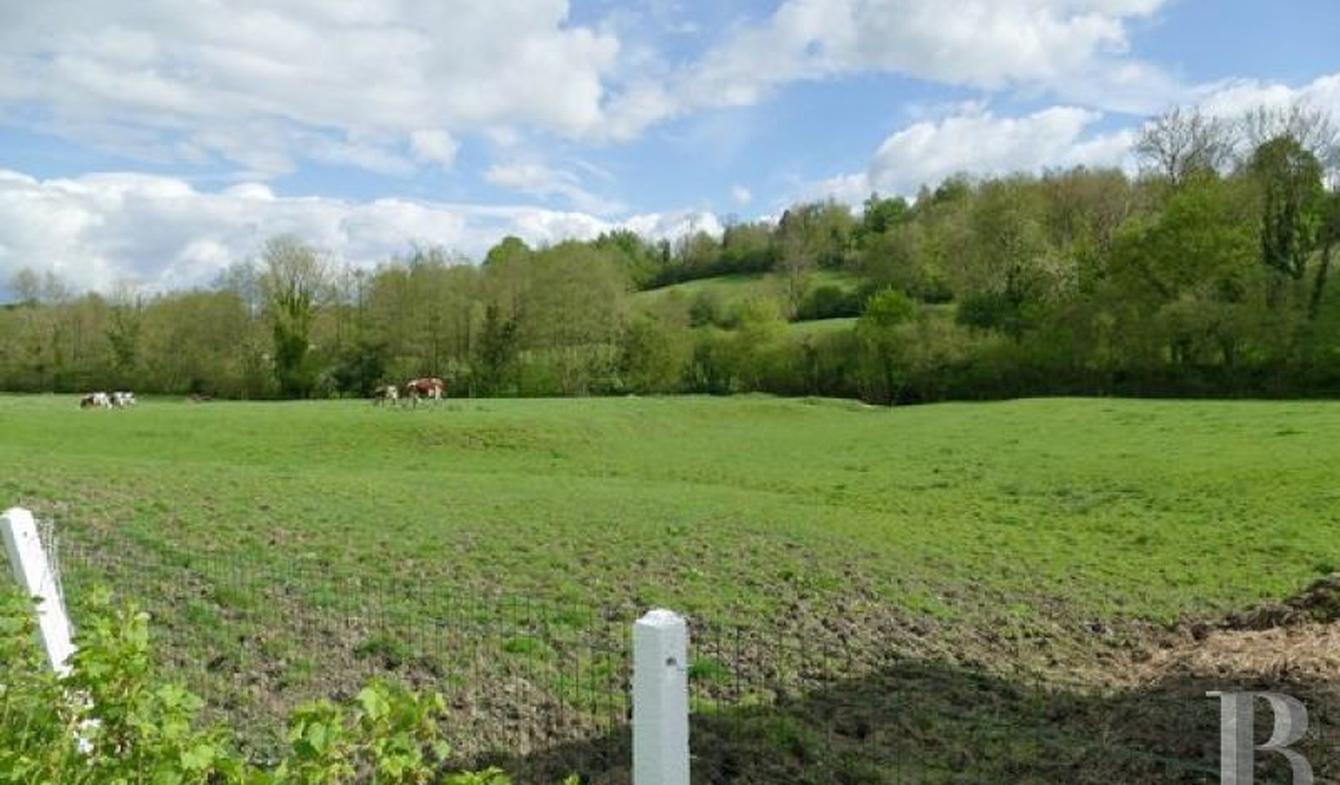