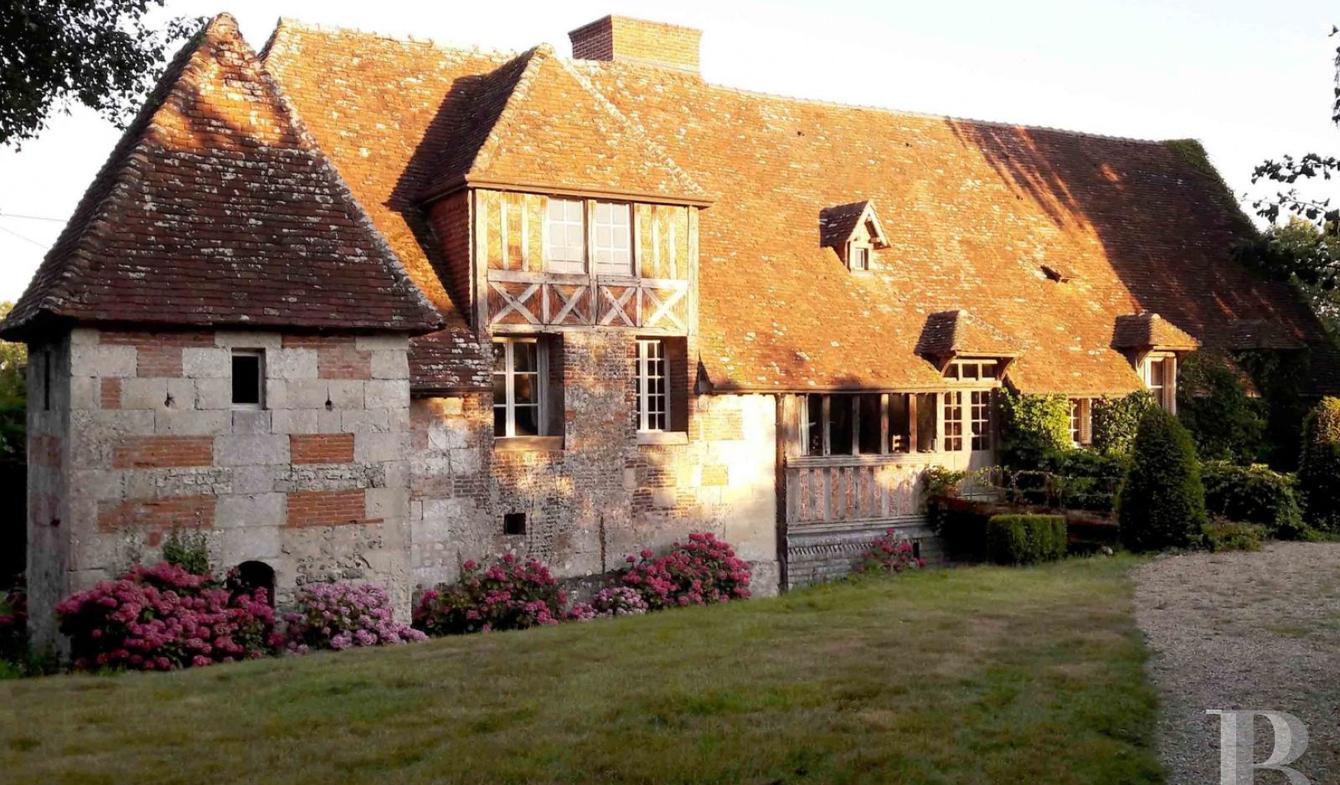 In the Auge Country, 200 km from Paris, a 16th century, stately manor house and its outbuildings with 2 ha of land.In a region renowned for its architecture and its landscapes, this property is 200 km from Paris via the A13 motorway and 40 km from the towns on the “Côte Fleurie” (Coast of Flowers). Lisieux, with all the useful infrastructures of a sub-prefecture and 20,000 inhabitants, is 10 km away. Its train station provides 1¾-hour links to Paris. The village and its local shops are 8 km away.A road winding its way through the countryside leads to this property’s entrance gates. Its driveway is shaded by the tall trees surrounding it, forming like a protective shield between the little road and the buildings. Curiously, the manor house appears to sink into the ground which, in front of the main facade, dips abruptly down to the lower level like a moat. A walkway provides access to the entrance of this 300 m² residence. However, the lie of the land at the back means that the first-floor windows are on a level with the ground.A brick garage separates the manor house from a half-timbered barn. A swimming pool and its pool-house are set at a distance. The land in front of the manor house slopes down to the bottom of the valley.The manor houseThis manor house, constructed in a rectangular layout around the end of the 16th century, was extended and modified during the 19th century. On the old side, the three-sloped roof is covered with flat tiles. A watchtower, topped with a hip roof, remains on one corner. The walls are composed of brick, stone quoins and flintstone. The quoins forming the corners are alternately laid lengthwise and end on.On the main facade, a hanging roof dormer with a hip roof, certainly redesigned in the 19th century, lets copious amounts of light into the large lounge and the bedroom above it. The jambs of the dormer are clad with flat tiles. The half-timbering of its gable is filled with small bricks laid in geometric patterns.BasementSpanning a total of 164 m², the basement runs the full floor surface area of the manor house. It notably comprises two large rooms illuminated, on one side, by basement windows and, on the other, by openings providing access to the garden.Ground floorDouble glazed doors open into a large room, one wall of which is decorated with a monumental fireplace. Two openings providing access to the lounge, on either side of this fireplace, are surrounded by exposed brick and dressed stone. The cob has been removed from the half-timbering and replaced with glazing. Two windows looking out over the garden let copious amounts of light into this room.An oak wood stairway, in a corner facing the fireplace, goes upstairs. One door, next to it, opens into a kitchen, a second opens into a corridor which provides access to two bedrooms, a bathroom and a separate toilet, whilst a third opens into a lounge-library.The vast lounge is illuminated on three sides by six windows, a monumental fireplace decorating the fourth wall. It shares the same chimney flue as that in the living room. The bricks forming the walls are exposed, as are the beams. The openings are framed with dressed stone surrounds. The floor is paved with old tiles. A door in a corner opens into a room housed under the ridge of the tower. The latter is illuminated by rectangular windows set in each wall.First floorThe oak wood stairway, featuring steps paved with old tiles, goes up to a landing which provides access to five bedrooms, two of which are adjoining, a bathroom and a separate toilet. The flue of a chimney decorates a wall in one of the bedrooms. A vast bedroom is laid out above the lounge. Its roofing framework is exposed. A bathroom has been installed in a corner between the trusses. It is notably illuminated by the windows in the hanging roof …

Listings similar to this manor, Lisieux

Beautiful 16th-century manor house of 240sqm of living space, surrounded by a remarkable landscaped garden on 1,16 ha with a pond, guest house, and two large outbuildings. ...

Come and discover this pretty house, located 3 minutes from the centre of Honfleur, you will be seduced from the first moments by its quiet location and its magnificent panoramic view...

In Normandy, Calvados, in the heart of the Pays d'Auge, 15 km from Pont l'Evêque and 28 km from Deauville. For sale is a charming Norman thatched thatched longere and its numerous... 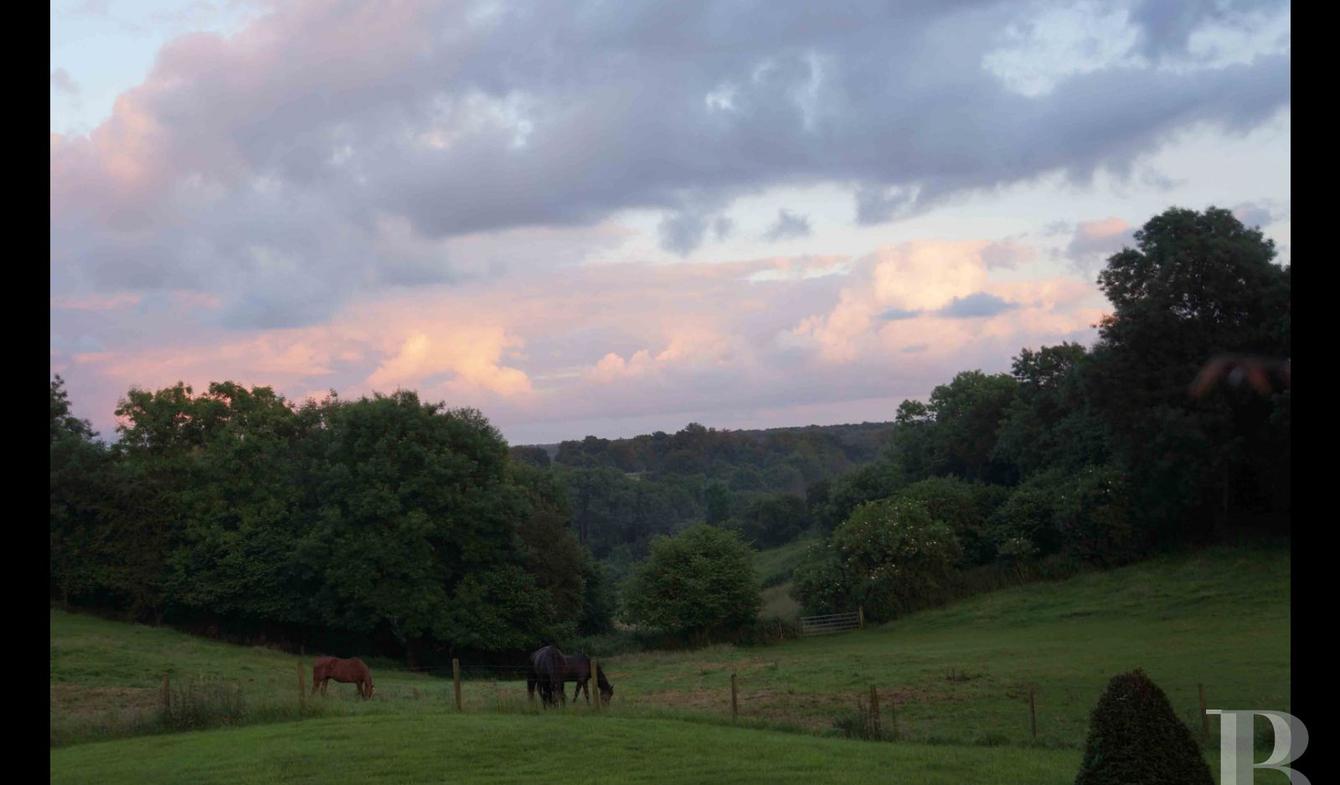