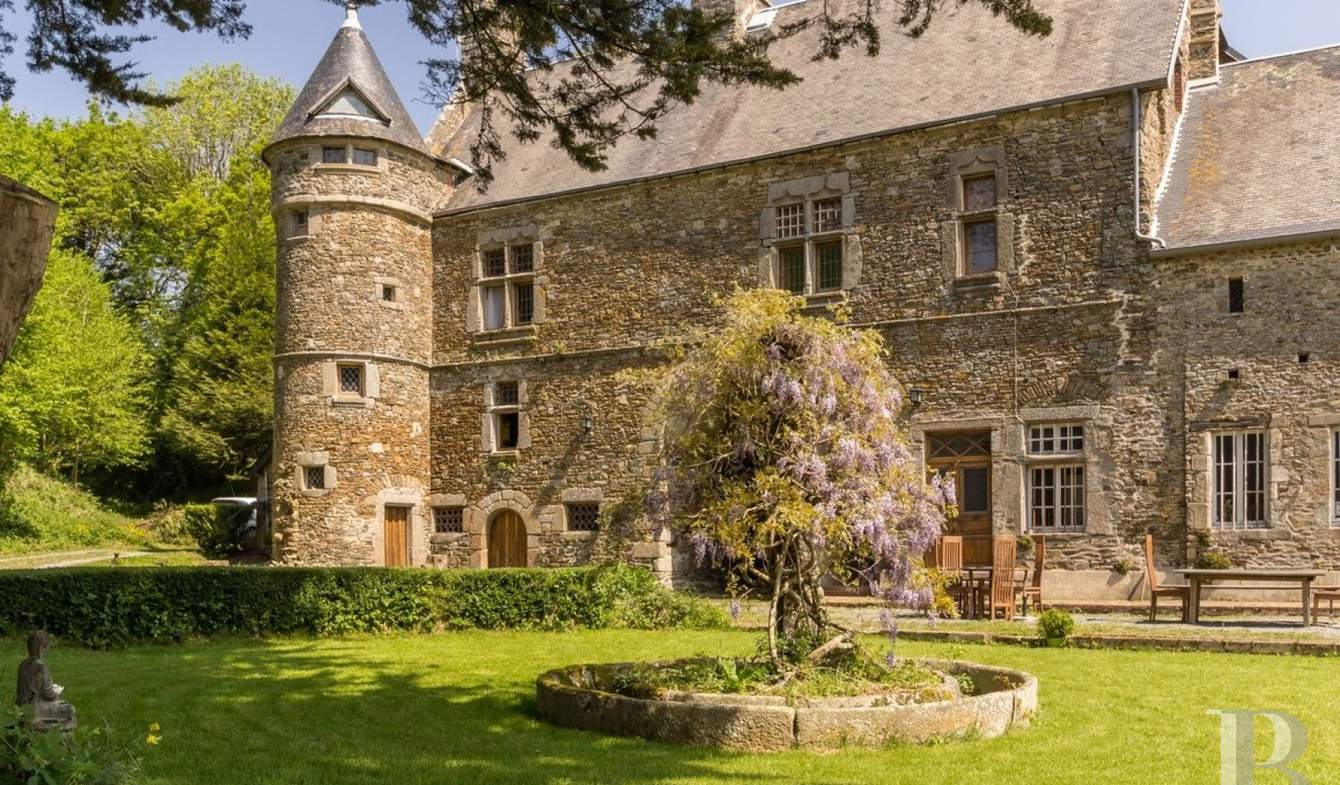 Near to Coutances on the Cotentin peninsula, 9 km from the beaches, a 16th century manor house and its outbuildings.Near to beaches, a golf course and miscellaneous shops, this manor house and its three neighbours are to be found along the road to Coutances where it meets a little country lane. This superb-looking, 16th century building can be glimpsed at the end of an avenue.Once past the three neighbouring houses, the manor house facade, constructed from granite and quarry stone blocks, featuring large vaulted and arched doors with mullioned windows, bears witness to Cotentin’s late flamboyant gothic style architecture. A large tower featuring loopholes houses a monumental stairway with an internal sentry box or watch-turret.In the courtyard, the appearance of the manor house stands out courtesy of a second round tower, with stairway and windows featuring cross-bars and arches with ogee moulding, all made of granite.Worthy of note:- the architectural quality of the double entrance: a pedestrian gateway, with its inscriptions on the vault (1762, 1815), and a carriage gateway, both extended by two vaulted passageways, separated by a solid wall. A similar system is to be found in several of the chateaux in the French department of Manche;- on both facades, a wonderful series of windows with mullions and ogee-arches (casement and half casement), the jambs of which still feature gothic decoration. Their state of preservation is quite exceptional especially when compared with other local contemporary constructions;- the latrines, set on high in the corner of the tower and the gable wall;- the outbuildings, composed of farm buildings with several semi-circular arched openings;- several trees, hundreds of years old, as well as a small lake, a stream and a well;- a vegetable garden and an orchard, spanning a total of approx. 1.6 ha.The manor houseThe actual manor house, spanning a floor surface area of approx. 250 m², is a maze of stairways and levels.Passing from one ground floor to another via interior stairways, cohabit a lounge, a small dining room, a kitchen, a shower room and a kitchen area providing access to a large bedroom, that could be transformed into a self-contained studio flat. A semi-underground independent cellar, spanning approx. 40 m², is on the same level as the ground floors.On the first floor of one side of the house, reached via the stairway in the round tower, is a study or bedroom. On the other side, on a higher level, the other stairway leads directly to the second floor with 4 adjoining bedrooms, a shower room and 2 toilets.An attic which could be converted completes this house.Most of the rooms feature wonderful granite fireplaces, one of which bears a round motif, encircling an unsculpted coat-of-arms, separating a date: 1616.Ground floorFour separate entrances: one leading to the tower and its flat; the second, to a large semi-underground room, spanning approx. 40 m²; the third, to the actual manor house via the kitchen; the fourth, to the room with its monumental fireplace and to other rooms in use as a kitchen and a dining room.First floorThe tower stairway leads to a large bedroom, spanning approx. 35 m², with its own shower room and a kitchen area. This bedroom communicates with another bedroom, spanning approx. 20 m², which, in turn, communicates with the rest of the manor house and its two other bedrooms and a bathroom. This section is reached via another stairway which comes up from the kitchens and continues up to the attic.Second floorThis level, awaiting conversion, spans a floor surface area of approx. 90 m².OutbuildingAdjoining the manor house, a workshop and several lock-up garages as well as a storage area. Facing the manor house, a large, 350 m² building, awaiting conversion, dates from the same …

Listings similar to this manor, Coutances

Just a stone’s throw from the beaches on the Cotentin peninsula, a 16th century manor house and its outbuildings. 3 hours from Paris by road or train, 5 km from the town of...

Located in a charming rue du Versailles Normand, near the city center, this Mansion dating from 1702 has a living area of 347m² and a wooded park of 2500m² enclosed by walls. The...

Located near Valognes, this beautiful and vast charming house with noble and timeless materials of 540m², is surrounded by more than two hectares of green land. Today transformed into a...

In the town of Avranches, 15 minutes from the beaches, a listed, 12th century manor house with its walled garden. Avranches, a historic town in the French department of Manche, is...