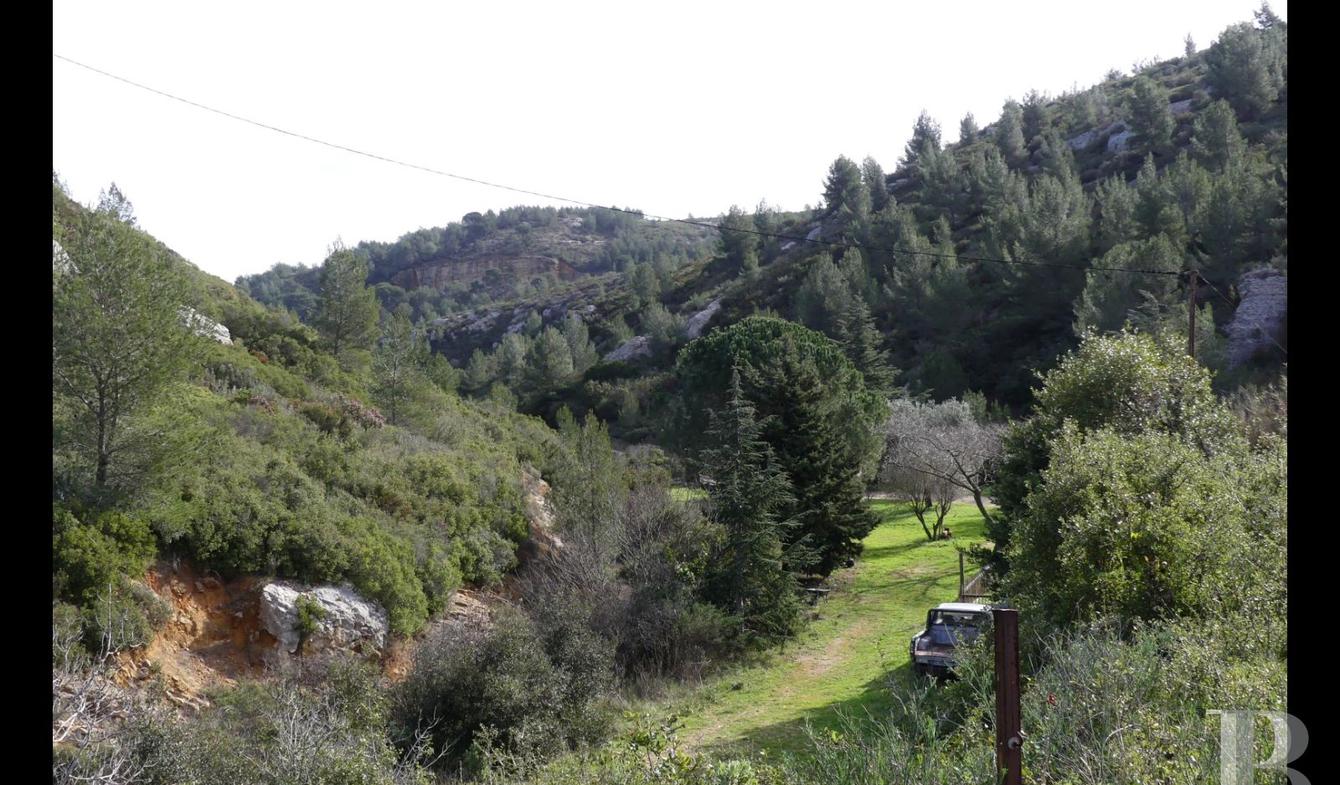 In the midst of Calanque National Park, a 160 m², traditional Mas house in 7 hectares of land.Some 30 minutes from the centre of Marseille and 6 minutes from the shops and amenities in La-Ciotat (35,000 inhabitants), this traditional Mas house stands, free of all nuisances, amidst Calanque National Park. The nearest neighbour is some 600 m away as the crow flies, whilst the sea is 1½ km away. Marseille airport is a 45-minute drive; Marseille train station, with a TGV train almost every 30 minutes, is half an hour away.This traditional Mas house is reached via a little tarmacked road which, once past the property limits, becomes a dirt track able to take cars for the last 500 m. A few hiking trails border the property, isolated from the latter by gates. The traditional Mas house itself and its outside terrace are laid out where a main valley and a little, shallow, transversal valley meet. The property is therefore bathed in sunlight all year round. The swimming pool and its vast terrace as well as an enclosure and stalls for horses are in the main, south-west facing valley. Almond, mimosa, fig and cypress trees enhance the scrubland landscape which covers the neighbouring heights.The houseConstructed as a part of a farmstead around the middle of the 18th century, this traditional Mas spans approx. 157 m². Recently fully and tastefully renovated, it still has traces of its old architecture, the load-bearing walls of which are almost a metre wide at the base. Similarly, amongst the outbuildings, there are still almost 20 linear metres of old pigsties, now used as cellars.Ground floorThe entrance door opens directly into a lounge-dining room area with parquet flooring. Decorated in a contemporary manner, this room features a wood-burning stove. The Mas’ original architecture has been preserved and the luminosity reinforced through the addition of a French window and three glazed panels, two of which are set in the gently sloping roof. This room is extended by a study-library, under exposed beams, which also houses a stairway, with stainless steel railings, going upstairs. The kitchen, with all modern-day fixtures and fittings, is widely illuminated via a French window and a window. Two bedrooms, with built-in wardrobes and both overlooking the vast outdoor terrace, are laid out on this level. A shower room with two wrought, wash-hand basins and a separate toilet can be reached via a hall area between the two bedrooms. This level also includes a laundry room and a storage area.First floorThe interior stairway leads up to a vast games room, which can also be used as a spare bedroom, with a shower room and toilet. This room opens into another bedroom, with a vast wardrobe and a window looking out over the main valley.The groundsThe grounds comprise three separate sections of land which, nevertheless create an impression of wide, open space, due to the lack of fencing, apart from the two gates marking the junction points with the hiking trails. The first section, laid out at the entrance to the property, encompasses the access drive over approx. 8,000 m² with a small ruin and a flat, enclosed area where several horses were still recently grazing. The traditional Mas house and its vast outdoor terrace, the swimming pool and its terrace, an enclosure for horses, fitted with two 8x4 m stalls, as well as an old pigsty and miscellaneous outbuildings are on the second section. Spanning a surface area of approx. 4 ha, it follows the lie of the land in a shallow valley for some 350 m. A few terraced areas, supported by dry stone walls, go down along one side of the valley. And lastly, a third wilder section on slightly higher land, spanning more than 2 ha and featuring the ruins of an old house, is 300 m away …

In a very quiet environment, elegant traditional farmhouse of 200 Sqm that will seduce countryside's lovers. This beautiful property is on a 7 hectares' plot. A large living room of 100...

In the countryside, close to Saint Rémy de Provence, this large restored 500 m2 mas is spread all along under the sun of Provence in the middle of 2.1 Ha of greenery. In front of him,...

Superb 19th-century farmhouse for sale, just 10 minutes from Avignon TGV train station. Charm and authenticity are the keywords associated with this property, which has a living area of... 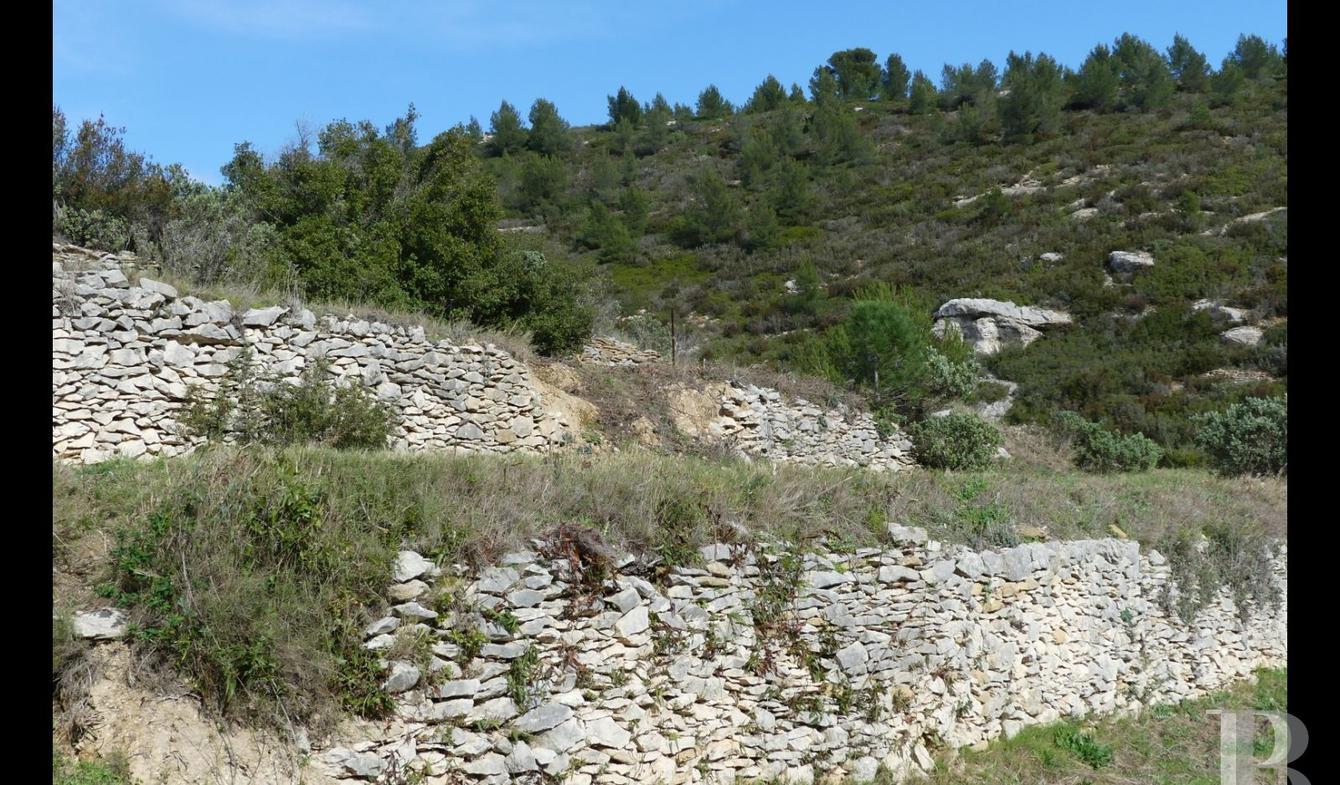