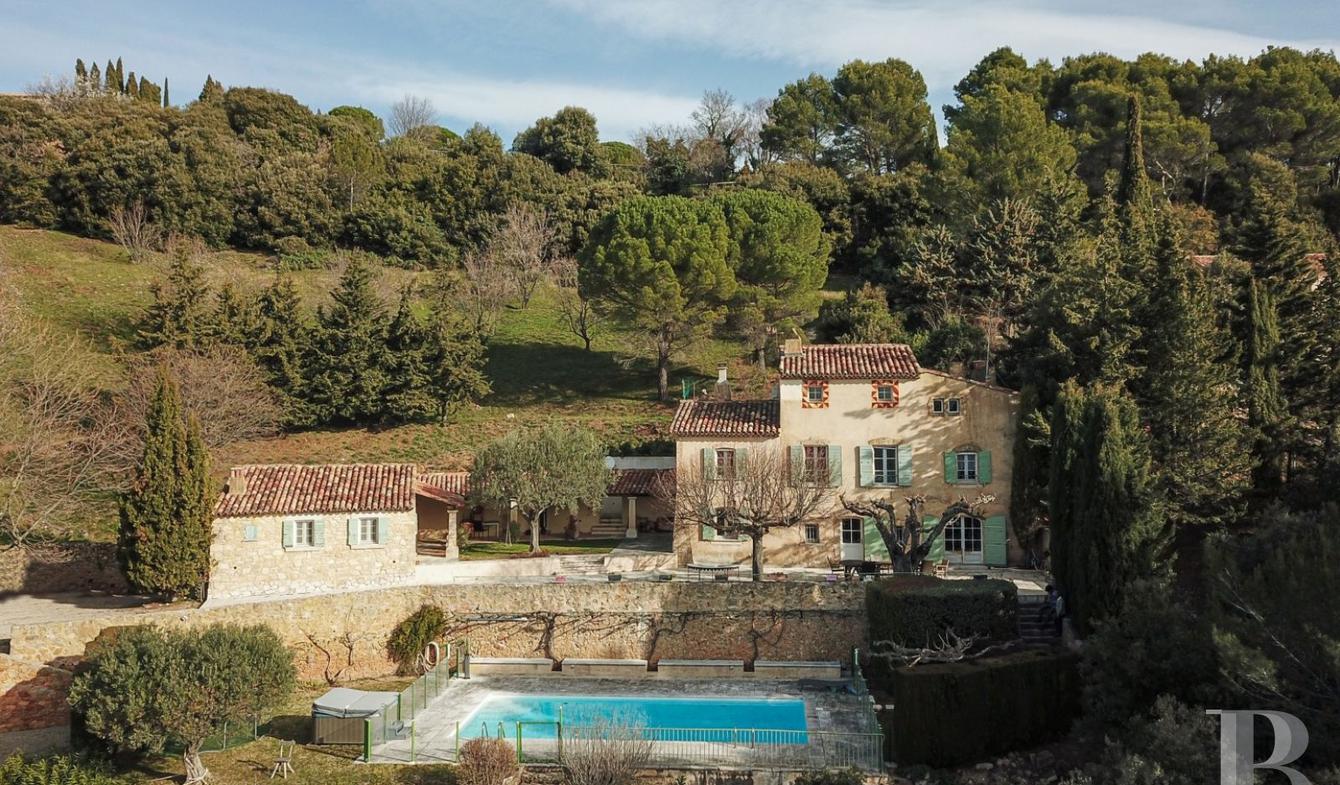 In Provence, in one of France’s most beautiful villages, an authentic Bastide house typical of Provence overlooking the valley.10 minutes from Draguignan, 30 km from the motorway and 40 km from the beaches or the nearest Alpine ski resort, this south-facing, traditional Bastide house looks out on to a panoramic vista extending over 180 km. It is ideally located on the edge of a 13th century hilltop village, classified as one of the Villages Preferred by the French, amongst the one hundred places to see in France and elected one of the Most Beautiful Villages in France. Awarded a star in the Michelin Green Guide, it still has all the authentic character typical of an old Provencal market town, with its old stone, its restored facades, fountains and flower-filled squares. This setting and this privileged location naturally make it a great tourist attraction, where first-class restaurants are audacious, subtle rivals.A gravel drive bordered with variegated Mediterranean plants, sets the tone, facing an astonishing panoramic view. This traditional Bastide house, surrounded by its garden, has a south-facing facade, featuring openings on three levels. The house stands in approx. one hectare of terraced land, planted with pine, cedar, cypress as well as olive trees and enhanced with an orchard. A flight of stone steps goes down to a first terraced area, paved with stone, which includes a swimming pool. A lower terrace is home to a half-court. The main building is bordered by a paved, shady terrace, as is traditional in Provence. It provides a link to a second house. A covered gallery supported on stone columns connects the two buildings. An outbuilding, set slightly back, has been converted into an artist’s studio and a garage.The traditional Bastide houseThis main building stands facing south. Two thirds of its surface area span two floors above a garden level, the other third spanning a single level. The typical Provencal roof, with its Roman tiles, is edged with a triple, masonry overhanging cornice, vestige of an old noble privilege that disappeared with the French Revolution. The openings on the garden level have stone surrounds and the corners of the building are flanked with stone quoins. The second level features two square openings enhanced with two-tone glazed tiles.Garden levelA French window opens off the terrace into a room in use as a dining room, with a fireplace, and a living room, illuminated via wide openings. This living area communicates with a kitchen, opening on to the terrace via a glazed door. The ceilings throughout this living area are enhanced with exposed beams. A pantry, a toilet and a boiler room. The floors on this level are laid with old terracotta tiles; the stairway has terracotta-tile steps.First floorThe stairway goes up to a landing which provides access to three bedrooms, a bathroom and a shower room. All three bedrooms face south, with wonderful panoramic views. The floors are laid with old terracotta tiles.Second floorThe landing leads to two bedrooms, a bathroom and a shower room with the same tiles as those described on the other two levels. A storeroom.The self-contained houseThis exposed stone house, spanning a single level, is linked to the traditional Bastide house by a covered gallery supported on columns. It comprises a comfortable room, with exposed ceiling beams, a kitchen area, a bathroom and a toilet. The floors are covered with the same tiles as those in the main house.The artist’s studioThis 2-storey annexe building stands in the courtyard at the entrance to the property. The garden level is taken up by a garage whilst the upstairs, composed of two rooms, is laid …

Listings similar to this mas, Brignoles

Come and discover this wonderful country house for sale in Tourrettes, enjoying an elevated position and a panoramic view of the Var countryside. On the welcoming ground floor is an...

Bandol - Very beautiful architect villa of approximately 210 m² with a very beautiful open view with the sea in the distance. Located in a quiet residential area on the heights of...

Sale Grimaud. We offer for sale a beautiful villa of 200 m2, fully renovated in 2019 in a sought secure area of Beauvallon, close to international golf and the sea. It consists of: an...

This is not everybody house, this property is  like nothing else and will respond to all your comfort request. Peaceful and secure area. Entrance in a large living room, superb kitchen,...