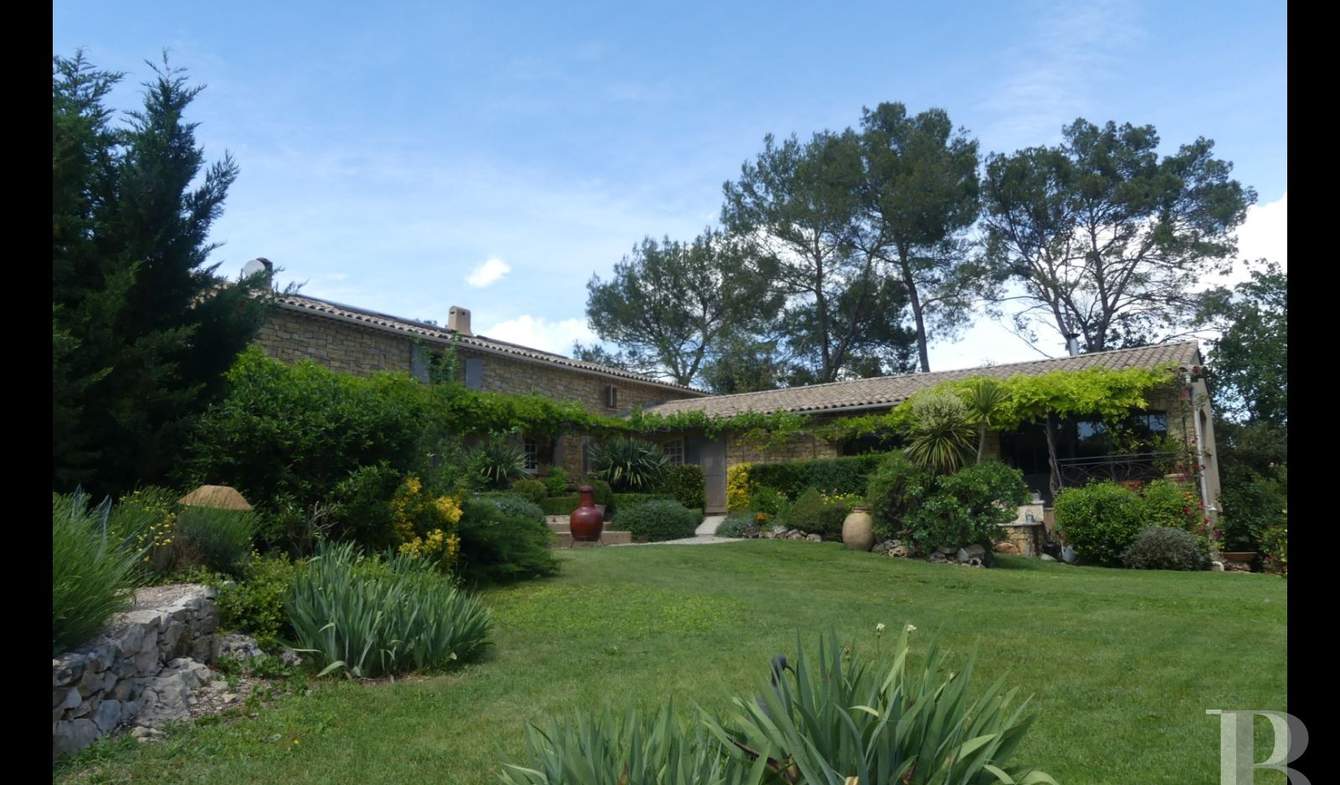 A fully renovated, traditional Mas house in a verdant haven in a dominant position in the midst of Provence.Var, the second most wooded department in France, is a tourist mecca between sea and mountain, with a wide variety of reliefs and landscapes and, of course, its outstandingly sunny climate. This property stands in countryside with Mediterranean vegetation highly typical of Provence, near to France’s leading village as regards agriculture and organic animal breeding, surrounded by fields of vines and herbs. It is also a good starting point for numerous hiking trails.It can be reached via TGV train (an hour’s drive from Aix-en-Provence train station), aeroplane (an hour from Nice and Marseille airports) or by road (20 minutes from slip roads for the A8 motorway).A little winding road, leaving the village just a kilometre away, leads to this property built on a promontory with a vista of the surrounding countryside. An awning at the entrance to the house makes it easy to park two cars. The north facade, with its ochre-coloured rendering, is partially covered with Virginia creeper. This facade features a trompe-l’œil dovecote, surrounded by Salernes ceramic tiles, a reminder should it be necessary that this is Provence. The recently extended house, robustly constructed on rock, predominantly faces south and west. The swimming pool, with its stone paved deck and its storage area located underneath, as well as the Jacuzzi, nestling in an outside ruin, all blend perfectly with the immaculately kept, typically Provencal garden, with its low, dry stone walls, its fountain, its French bowls pitch and its vegetation (herbs, pine and evergreen oak trees, etc.). A loose box able to accommodate two horses is on the east side of the house.The houseThis building, spanning 245 m² of living space, is laid out in an L-shape, providing a view of two balanced facades. The west facade is all on a level, with lovely spacious rooms inside. The walls are faced with dry stone and feature wide, arched openings. Small-paned windows give an archaic touch to this, nevertheless, more recent, traditional Mas house. A large, wrought arbour, bordering the entire south facade, is able to accommodate a large table for taking meals outside. Old-fashioned shutters with wonderful hinges enhance the facade and provide protection from the summer sun.Ground floorA robust, arched, wooden door opens on the north side into a vestibule providing access to a living room and two bedrooms. Informed eyes cannot be left indifferent by the extensive ironwork. The lounge-dining room area further opens into a kitchen. An area in use as a study, at the very end of the lounge and facing the fireplace, is long illuminated by the sun courtesy of its very large windows. A vast bookshelf unit reinforces the warm character of the room. The immaculately and soberly decorated bedrooms are fitted with all amenities (toilet, shower room and storage cupboards). The floors are covered with Galilée stone which brings a great deal of clarity to the inside. At the end of the west wing, a large room fitted with a summer kitchen could also be used as a dining room: this room is also very bright as it features two large picture windows with workshop style ironwork framing. It could easily be transformed into a self-contained studio flat by adding bathroom and toilet facilities. A glazed oculus in the floor makes it possible to gaze at the cellar built on the rocks below.First floorA stairway bordered with old wrought iron railings, housed in the entrance hall, provides access to the upstairs above the main wing. It comprises two bedrooms, with sloping ceilings, each with their own shower room and toilet. They are immaculately decorated. An attic with a large storage capacity can be reached from one of the …

Price details of this mas:

Listings similar to this mas, Correns

On the ground floor you have a entrance hall that takes you into a beautiful living room with an open fitted kitchen and an office, a laundry room and 2 en-suite bedrooms. Upstairs you...

EXCLUSIVE. In Montauroux, in a quiet and sought after area, Stone Mas on 3400m2 of land. In a confidential environment, mixing worked garden and natural shadows of large trees, large...

Close to Cotignac, at the gateway of the organic village, this superb stone country house of 245 sq.m, on an enclosed and landscaped plot of 4000 sq.m, offers 4 bedrooms with en suite... 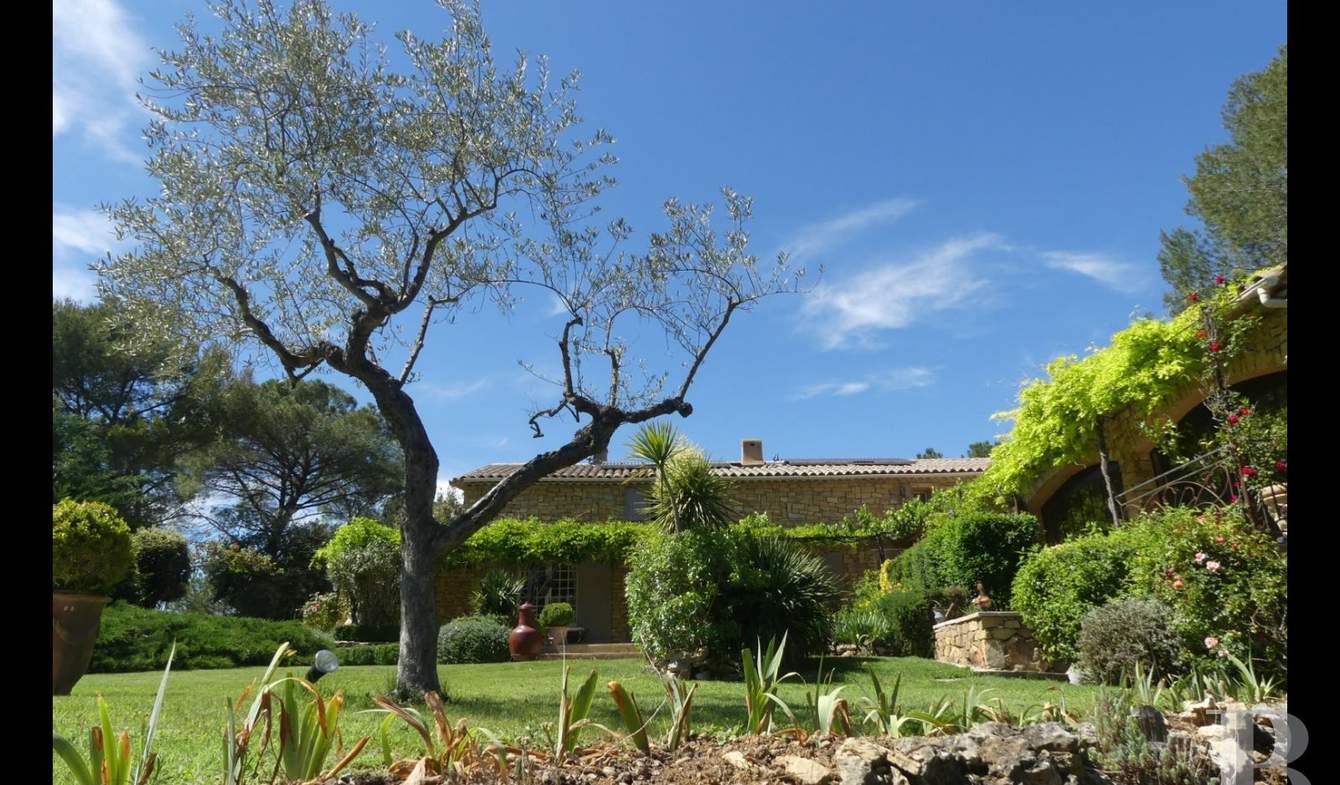