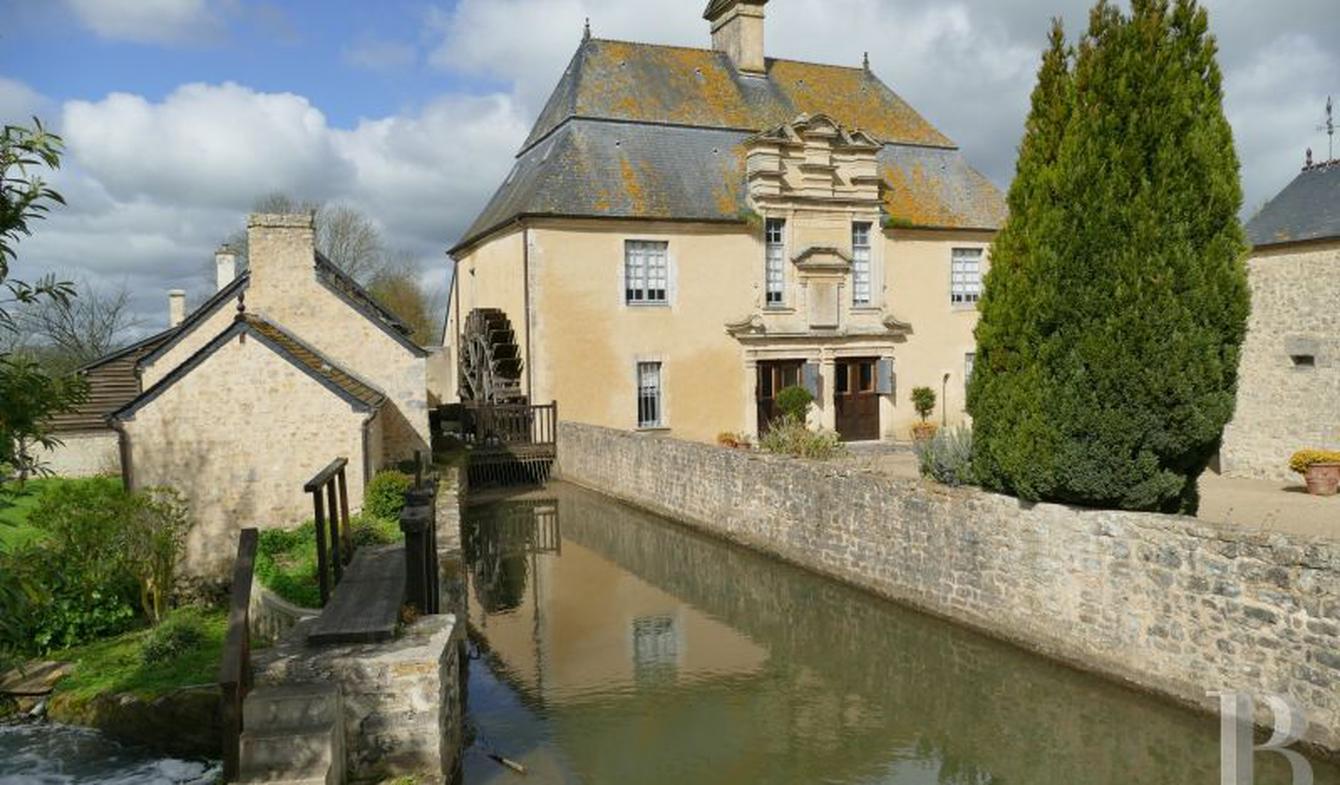 A listed, 17th century flour mill, with full water rights and outbuildings, in the midst of the Bessin marshes in the French department of Calvados.This property, in the midst of a hamlet, is 4 km from the A13 motorway leading to Paris, 280 km away. Caen, and its airport, with flights to London and the south of France, is 35 minutes away. The famous Omaha Beach is 9 km away. All useful infrastructures, such as a train station and supermarkets, are in a well-known town, 17 km away. The nearest market town, with all local shops is 1.5 km away and can be reached on foot or by bike.Constructed by a member of the Parisian parliament in 1684, this property is listed courtesy of its facade and its Mansard roofs. François-Mansart, the great 17th century architect, built the chateau near Balleroy in 1631. This mill is bordered by two little country lanes, the millrace as well as the river, and is surrounded by fields and marshland meadows. At the end of a main courtyard, bordered by a high stone wall (followed by two outbuildings), by the millrace and the railings that surround semi-circular wrought iron gates, its facade and its sculpted stone ornaments reveal their elegant and austere plainness. A walkway leads from the courtyard over the millrace, where the large wheel is to be found. A passageway separates an old bakery and its bread oven from the mill's extension and leads to the garden, with the river running alongside. Rear wooden gates provide access from the lane to a stone-lined carpark and to the garden, via a wooden bridge.The millThis mill is symmetrically divided into two sections, one used for industrial purposes and the other for living in. Twin entrance doors stand side by side in the centre of the building, composed of an imitation central projection inspired by Baroque architecture. The bay above the two doors includes a three-sided pediment, topped with a protruding panel, all flanked by two tall vertical windows. Standing out against the double, slate, hip roof, an arched pediment, with abutments on either side, completes the enhancement of this central projection. The chimney stack, in the middle of the building, is decorated with a sculpted frieze under four triangular pediments.Ground floorThe right-hand twin door opens into the entrance hall, featuring exposed stone walls and old terracotta floor tiles. It provides access to two bedrooms (one with painted cement floor tiles), and the kitchen. It communicates with the industrial section, transformed into a living room, also reached via the other twin door. A stairway leads to the full first floor of the manor house. In the living room, the belfry or the mill's roofing framework, said to be a thousand years old, stretches widthways at the end of the room. In the wall are round openings that once housed the mechanism, used for turning the two grindstones, now displayed next to the belfry. The walls are limewashed, the ceilings feature exposed beams and joists whilst the floors are paved with large flagstones. A stone fireplace stands facing the belfry. An opening provides access to the dining room, laid out in what was once a sheepfold as is proved by a long stone trough, divided into three sections, above which a wide horizontal window has been added. Two low stone walls separate it from the kitchen. To the rear of the latter are two doors, one opening on to the back garden and the other into a shower room. The stone of the walls and the roofing framework are both exposed. An opening at the end of the dining room leads to a room above the millrace.First floorThe stairway goes up to a small landing with, on the one hand, straight on, a reading room laid out above the living room and, on the other hand, two bedrooms and a bathroom. The reading room, with its wide vertical openings and the site of the old ...

Listings similar to this mill, Bayeux (14)

This beautiful apartment of 86 m² duplex is located on the 3rd and last floor, it has a balcony of 18 m², and a closed garage and a private outdoor parking space. Oriented to the West...

Beautiful 18th century Anglo-Norman residence, offering a living area of 200 m² with a plot of 3760 m². The ground floor is served by a bright entrance, a living room with fireplace, an...

Immaculately renovated with taste, this building of 270 m2 dressed with bricks is ideally placed in Pays d'Auge, 20 minutes from Lisieux. It borders the splendid church of Notre Dame du...

In a rural and preserved environment, in the heart of the Pays d'Auge, south of Caen, this former 18th century monastery is surrounded by 6200sqm of walled garden. The house, which is... 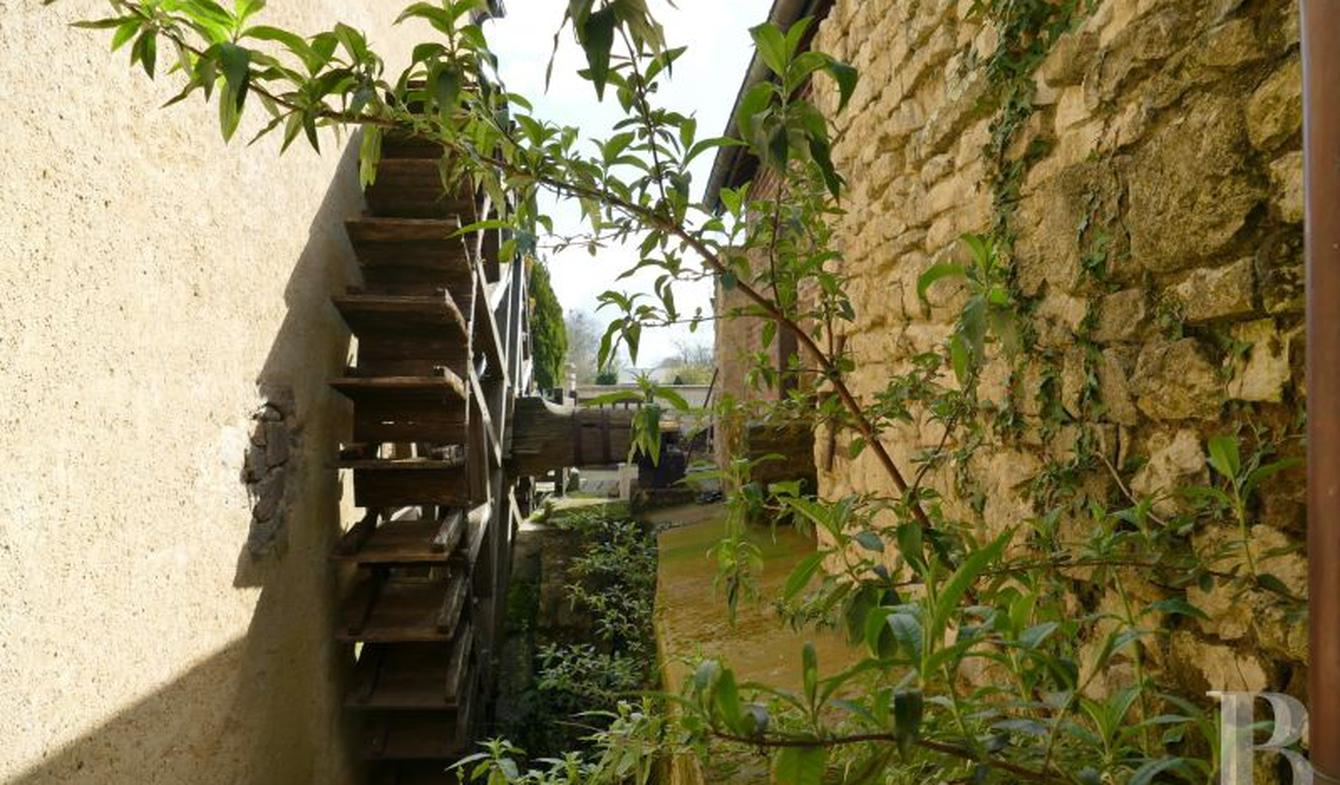