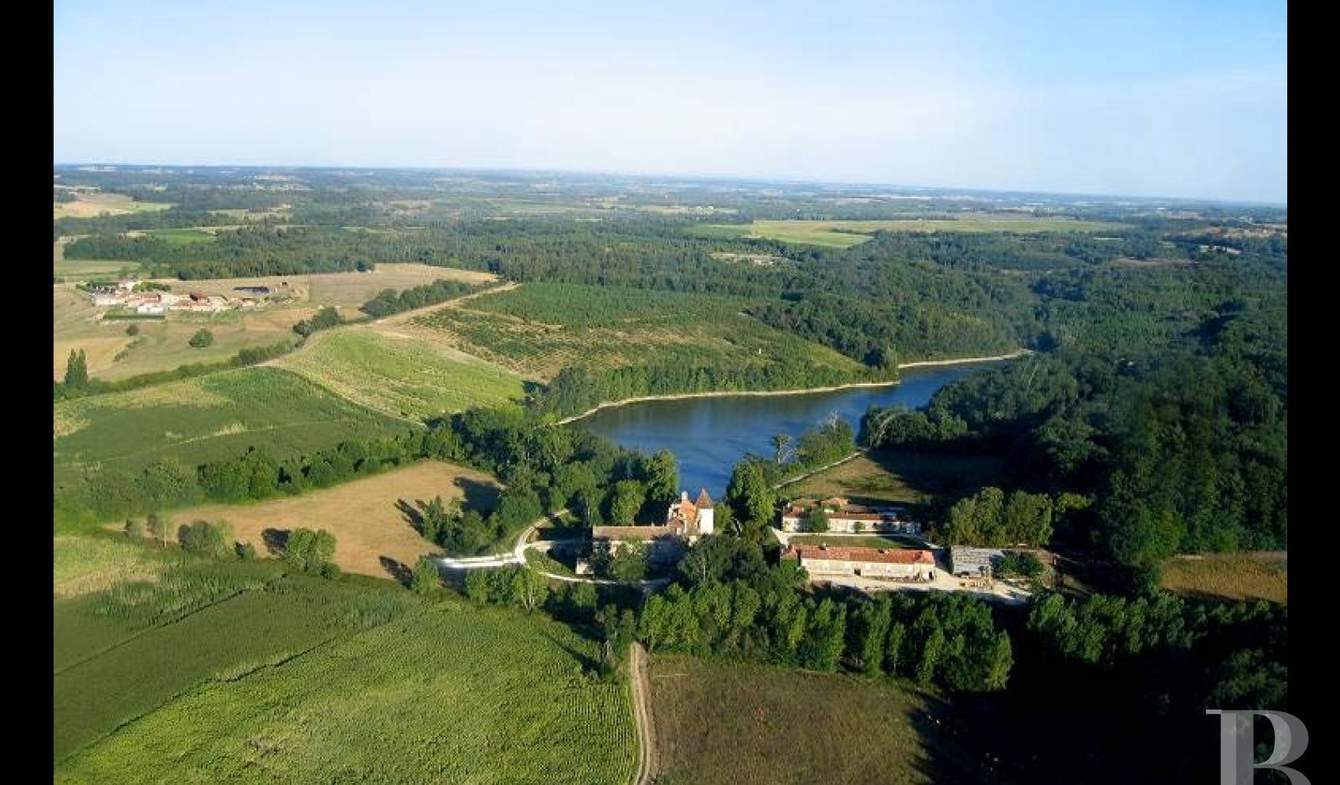 A listed castle and its fenced estate, spanning some 80 ha, with parklands, woods, farmland and a large lake in the area around Angoulême in Charente.Not far from Angoulême, in a region where the pleasant way of life comes from the variety of landscapes, the wealth of heritage and the fertility of the land.The French department of Charente offers a multitude of places to visit, leisure activities and festivals. Featuring prehistoric and Gallo-Roman sites as well as abbeys and castles, the Way of Saint James, which goes through it, is dotted with Romanesque churches and character villages. Prior to becoming the world’s capital of comic strips courtesy of its annual festival, Angoulême was, in bygone days, the Cité-des-Valois. Even Louis XI would not have refused the local produce from his lands: cognac and pineau as well as Chalais veal, Barbezieux chicken, foie-gras and hazelnut oil.This estate, a classified site spanning some 80 hectares, comprises two distinct entities:- the castle, listed as a French historic monument, which is personally owned by the proprietor.- all the land comprising woods and farmland, buildings and equipment which belong to an SCEA (Société Civile d’Exploitation Agricole - Civil Farming Company), with annual accounts every 31 December,- a lake spanning more than 8 ha.The property is completely enclosed by 2.5 m high fencing, buried to a depth of 0.5 m.The castle and its parklandsAn alleyway planted with horse chestnut trees leads to the castle on the south side. Two farm buildings and outhouses flank a grass parterre. The driveway then splits into two, going towards the lake on the east side and around the castle on the west side. The building stands on solid masonry foundations surrounded by moats once fed by three lakes.The castle is reached via a bridge, spanning two arches, which crosses the dry moats before reaching a vast esplanade facing the dwelling which comprises two wings, one from the 18th century renovated in 2001 and 2002, and the other from the 15th century which is still to be renovated.Given French ISMH listing in 1992, the site has also been classified since 1946.- The 18th century dwelling:Dating from the 15th century and redesigned in the 18th century, it is flanked by a square pavilion and topped with a Mansard style roof featuring small, triangular pediment roof dormers. It spans a ground surface area of approx. 450 m².On the ground floor, a vast entrance hall, with the stately central stairway, provides access to two large lounges (40 and 60 m²), a study looking out over the lake, a comfortable, 70 m² kitchen with a fireplace, a dining room (35 m²) as well as a toilet.Upstairs, the 70 m², master suite comprises a bedroom, a bathroom with a shower and a bath, a Jacuzzi, a separate toilet and a dressing room. The rest of this floor is taken up by four other bedrooms. Two have a shower room and a separate toilet, the third one has a bathroom with a bath and a shower as well as a separate toilet and a dressing room, whilst the last one has a bathroom, a dressing room and a separate toilet.The second level is undergoing renovation works, the electric wiring and plumbing having been completed.The basement comprises a superb vaulted cellar.- The 15th century dwelling:This is the wing set at right angles. With its surface area of 250 m², it is smaller in size than the 18th century dwelling. It is in need of full rehabilitation works. Topped with a flat tile gable roof, its exceptional inverted hull roofing framework can but be enhanced by clever renovation works.The Estate’s SCEAThe SCEA or French Civil Farming Company owns all the land, buildings and various pieces of equipment. The grounds are entirely enclosed by 2.5 m high fencing, …

Listings similar to this property, Angouleme

Situated at the gateway to Angoulême, this exceptional property of 122 ha (305 acres) enjoys a wonderful and quiet setting. The general configuration includes a magnificent 17th and 18th...

Located at the gateway to Cognac, in a beautiful setting, this character house combines modern architecture with elegant old-style features (wood and terracotta tiles floots, old... 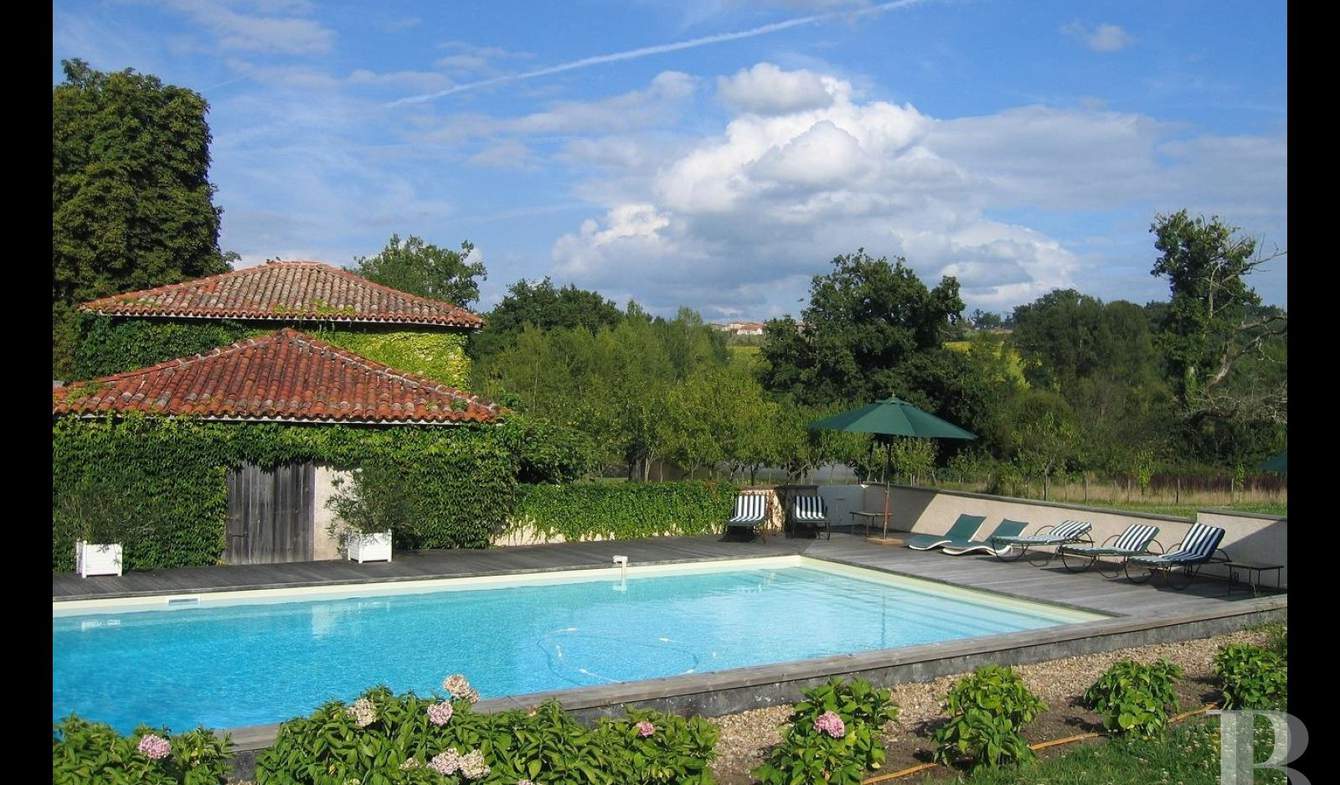