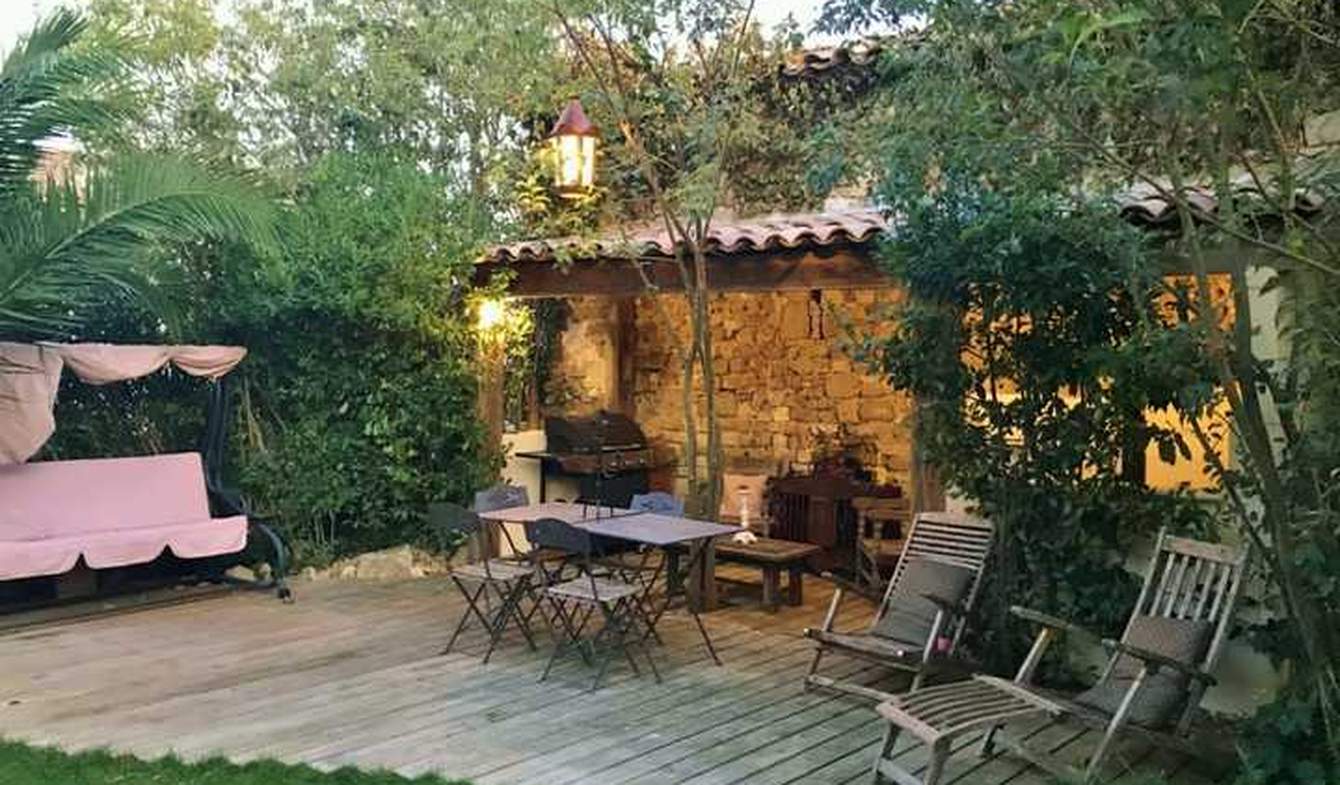 13th C. Historic residence of 257 m ² at the top of a village, 15 min. from Uzès This castle, formerly owned by the bishops of Uzès, spreads over three levels. From the entrance, a beautiful glass door opens onto a vestibule of 18 m² with storage cupboard (adjoining cellar). A first bedroom of 22 m² under roman vault with natural whitewashed walls opens onto the garden by a glass door; Bathroom with walk-in shower in the thickness of the wall, washbasin and toilet. At the same level, a vaulted reception room of 44 m² (4.20 m high under ceiling), benefits, thanks to the two beautiful loopholes north and south, as well as a large French window overlooking the alley, from a beautiful brightness. A large stone staircase leads to the first floor in an exceptional living room, of about 45 m², particularly bright and with a remarkable ceiling height of about 7 meters. This Hall of Honor with fireplace, houses a fresco dating from the beginning of the 14th century, representing 11 characters of an astonishing preservation remained lively, fresh and bright despite its, almost, 700 years. Full south view on the garden, by the two large French doors. Accessible from this room, two bedrooms of 15 and 16 m² have, for one, a washbasin carved in stone, walk-in shower and independent cabinet, and the other a bathroom annexed in the old tower (Shower, basin and cabinet). Each of these two rooms open onto a shared terrace of unheard charm. An exact wrought-iron staircase mimicking the existing vault, accesses the mezzanine in chestnut wood of 18 m ² which constitutes a private lounge area with that leads onto a large bedroom of 22 m² with sight on the Cevennes (bathroom with bath, washbasin and cabinet). A spiral staircase in stone, from one of the rooms of the 1st floor, will lead you to the top of the castle and one of the most seductive parts, where the old dovecote converted into a living room or spare bedroom, is incremented from a sublime terrace which enjoys exceptional views of the surrounding countryside. The enclosed landscaped garden hosts a jacuzzi and offers great views of the village's 13th c. tower and the castle. Heat pump heating combined with excellent insulation generates an exceptional energy rating (DPE Historic of the property: This castle played a prominent role in the history of Languedoc. This stronghold of the Count of Toulouse is conceded to the Bishop of Uzès by the King Philippe-Auguste in 1211 following the Albigeoises' crusades. The Bishop built a powerful tower which highlights his rank as temporal lord and the victory of the church against the heretics. The Bishop did justice in the great hall of the castle under a Gothic vault which culminates at 7 meters high, adorned with a beautiful scenery. Guillaume Grimoard, vicar general of Uzès, lived for some time in this castle before being elected pope (1362-1370) under the name of Urbain V, at the time when the Holy seed was established in Avignon. His nephew, Raymond de Montaut stayed at the castle in 1373. In the 16th century, as the beliefs of the Reformation spread, the lands of Languedoc became a Protestant bastion. The rivalry with the Catholics turned to civil war in the following century. The royal troops besieged Alès, the neighboring city, which they conquered in 1629. The famous Cardinal de Richelieu came in person to negotiate peace and reestablish the diocese of Uzès. The local tradition says that the cardinal stayed at the castle. The village will fall again in the hands of the Protestants in 1703, during the war of the Cevennes. The Chief of the Camisards, Jean Cavalier, set fire to the Church, but renounces to seize the Castle.

Listings similar to this property, Uzès

Old stones property of 178m² with guest house, park of 5486 m² and pool. This authentic 178m² stone Mas with guest house is located on the axis of Uzès - Alès just 5 minutes from the... 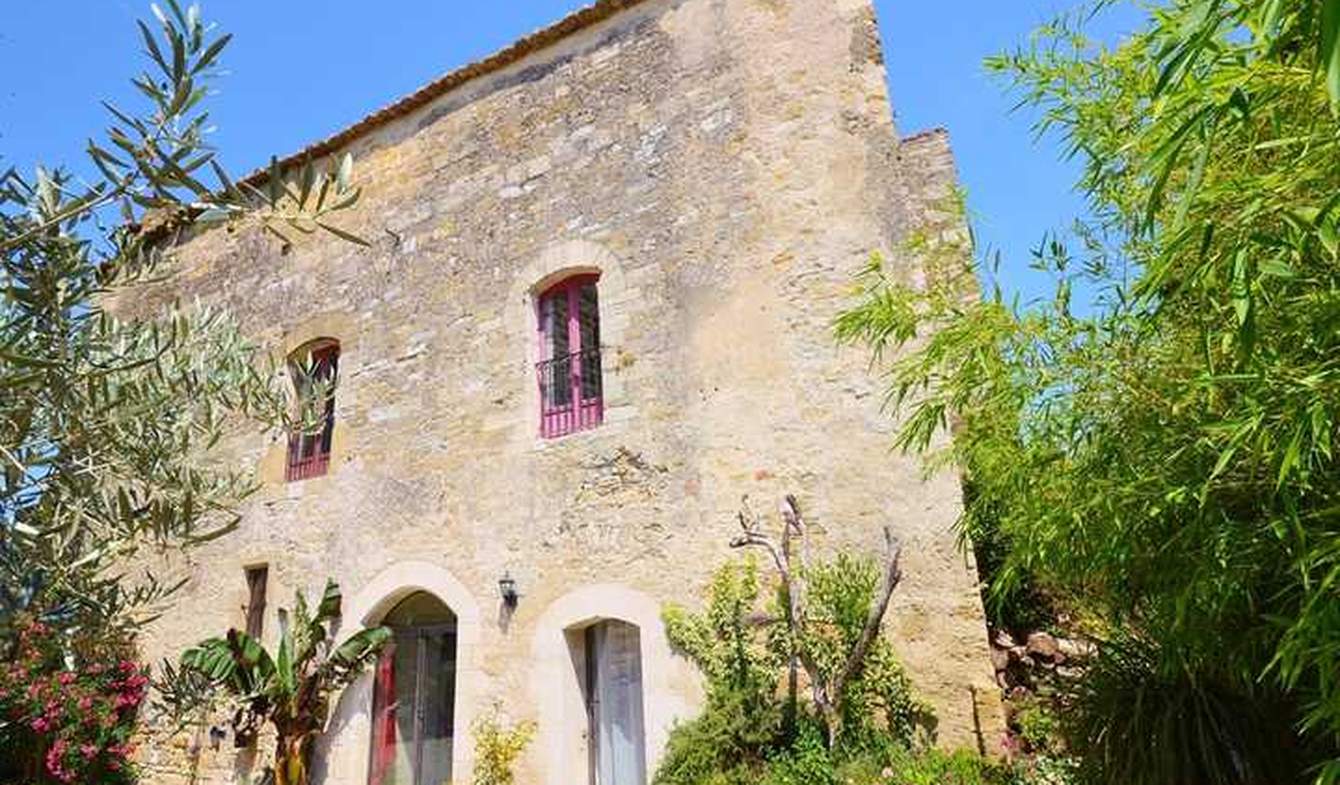