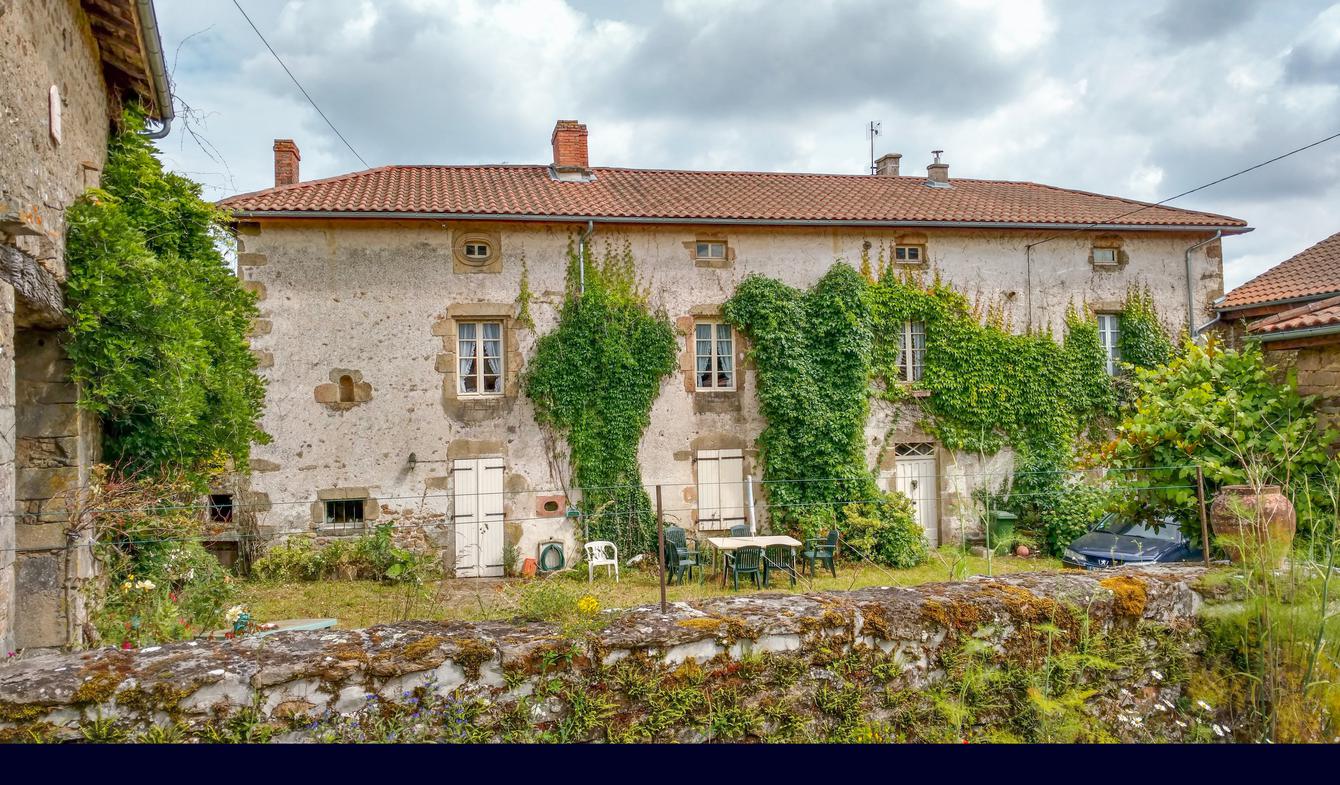 -Nord Limousin- Gentilhommiere on courtyard U with large outbuildings and walled garden from the 16th to the 18th century rebuilt on the foundations of an old manor of the 15th century with 1.6 ha of land. Located in a quiet hamlet at the bottom of a cul de sac, this beautiful set is away from any nuisance and is located in a natural environment, 5 minutes from a village with all services. Half an hour north of Limoges and close to the north-south axis A20, this gentleman has kept all its original elements - vaulted cellars, chimneys, pavements, beams - while having received the amenities to live now. Reuse elements of the old manor house have been integrated in the later recontructions on the old medieval vaulted cellars, giving a particular character to this house. The main building in the center is flanked by barns on both sides around a courtyard facing west. These are extended with firm walls by a grid that isolate it from the alley crossing the hamlet at the bottom of which it is located. The other side of the main building to the east dominates the typical limousine valley without any nuisance. Gardens forming a small terrace closed with low walls are below the court, they shelter a well and communicate with vaulted cellars. A walled garden to the north is adjacent to a small building for animals. The main building has a floor and a floor under attics served by a central wooden staircase, the ground floor courtyard is located above the cellars which are they walk-in garden side. Some are pierced by soupracks and one is set up in a wine cellar. The traditional bread oven and stone sink still exist, the stone pavements and beautiful granite fireplaces adorn the rooms, which are arranged in rows and simple in depth. A bathroom next to the boiler is located in one corner of the building, separate living rooms in the middle and the kitchen with the bread oven at the other end; a small library entresolee the adjoins. On the floor of the separate rooms have been arranged around a large central room and a comfortable bathroom has been built. The attic remained in the attic state. All the covers, those of the house as barns are recent and in good condition. The two barns form very spacious spaces. The end of one of them has been developed in living room with independent kitchen and mezzanine overlooking the outside via a small terrace on stilts of wood facing south. The environment is particularly preserved thanks to the proximity of a Natura 2000 area, and because the bocage landscape has remained in its original state due to traditional agricultural activities in the surrounding area (mainly cattle farming). Ancient Roman roads extend the path and furrow the countryside, a fountain and a wash house still exist nearby. Land area: 1.6 hectares In the outskirts of Limoges, 5 minutes from a charming town of 2000 inhabitants with all services, school and college. 3 hours from Toulouse and Bordeaux and 3:30 from Paris via the APrix: 216 000 euros agency fees included (including 7.41% fees charged to the purchaser).

Listings similar to this property, Limoges (87)

Limoges 36 km and 30 km of the highway A20, cynegetic and agricultural Property of 74 ha all in one piece, in use of private hunting, enclosed at 2,40 m of top, in kind meadows,...

The firm Sopar real estate has the privilege to offer you for sale this magnificent property located close to the city center of Limoges. A true haven of peace, this place is emblematic...

In a town located at the foot of the Monts d? Ambazac, 25 minutes north of Limoges, discover this property of the sixteenth century. It is located on more than 15 hectares of land with...