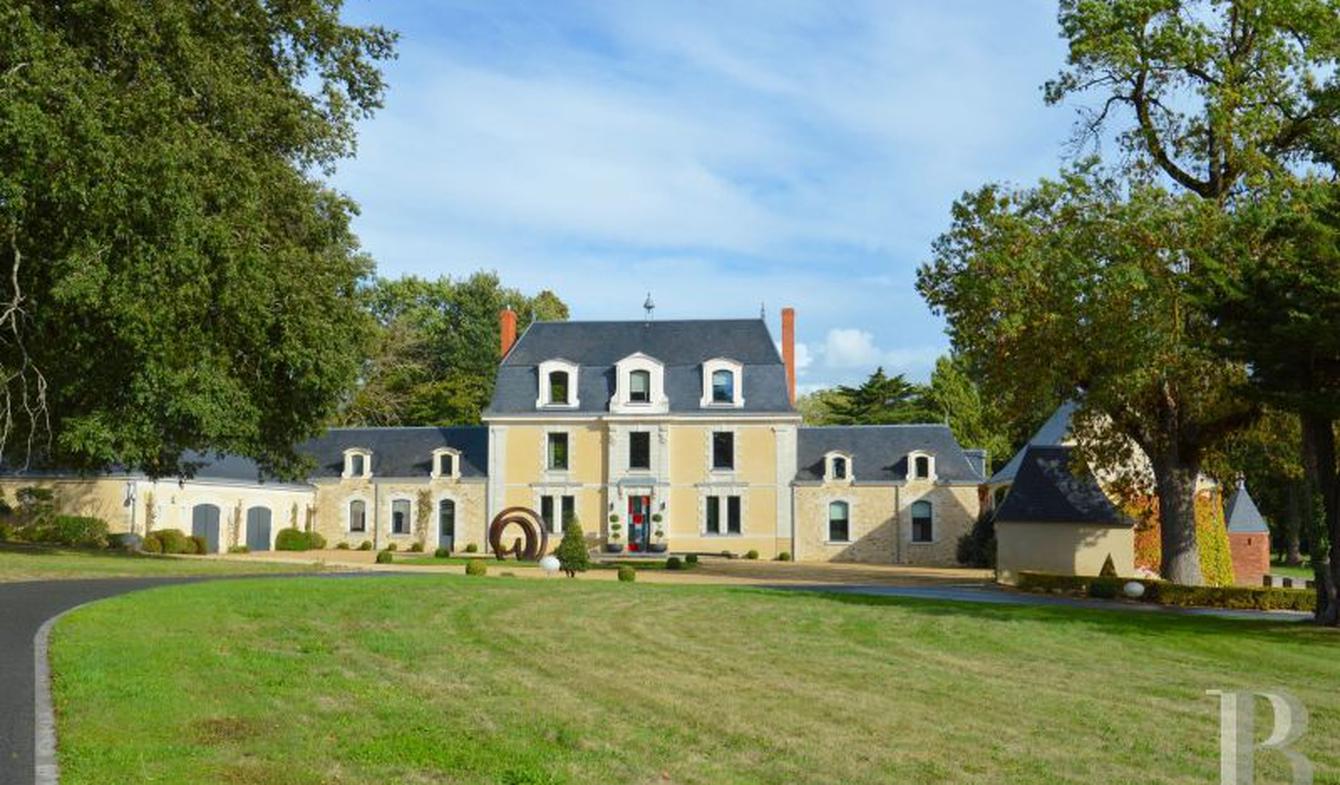 In the south of the Anjou region, amidst 15 ha of enclosed parklands, a manor house and its outbuildings, all fully renovated.This property stands in a hamlet. Less than 5 minutes from two villages with a few shops and amenities; 15 minutes from a character town with all shops and amenities as well as a weekly market; 20 minutes to the south of the town of Angers with its TGV train links to Paris taking less than 90 minutes (ten daily return journeys). Slip roads for the A87 motorway are less than 5 km away.The entrance to this property is off one of the streets in the hamlet. A gateway opens on to a drive which leads across the parklands to a vast courtyard formed by the manor house and its outbuildings. These buildings are set in the midst of 15 hectares of completely walled parklands. The manor house is composed of a central building, extended by wings set at right angles: one wing on the front facade and two wings flanking the rear facade. One of these latter two wings is adjoined by a greenhouse. The outbuildings comprise an old chapel, now a barn, and the former stables, now transformed into a guest house. This property adjoins a forest tract spanning over 2,000 ha and dominates the Layon Valley. A second drive, lined with trees on either side, provides access to the property's main gates.The manor houseIn the Middle-Ages, a fortified castle belonging to one of the king's equerries, it was then developed into a Seigneury with a stately house. Major renovation works were carried out in 2008 because of its very poor state of repair. Constructed from quarry stone blocks, it is totally or partially covered with lime rendering and topped with slate roofs: reflecting a Mansard style on the central building and gable or hip styles on the wings. The central section spans three levels, including an attic floor. The wings span, in part, two levels including an attic floor and, in part, a single level. The slight projections in the centre of the main, front and rear facades, the framing around the openings, the roof dormers, the cornices and the quoins are all made of freestone, as are the two pilasters flanking the entrance facade.Ground floorThe main entrance hall leads, on one side, to a lounge and an adjoining lounge-television room as well as a study. On the other side are a dining room and, also adjoining, a second entrance hall with access to a toilet and a kitchen. A few steps lead from the study to a games room and a room with a bread oven. The kitchen provides access to a laundry room which leads, in turn, to garages, a boiler room, a large room and an old greenhouse. The floors are covered with polished concrete, with parquet flooring in the television room, the study and the games room. The kitchen and the games room have cathedral ceilings. A wooden, quarter-turning stairway going up to the first floor is housed in the main entrance hall.First floorThe landing room leads to a hall area and a master bedroom which has a shower room, with a toilet, and a dressing room. The hall area provides access to two bedrooms and a shower room, with a toilet.Second floorThe landing leads to three bedrooms, a toilet and a dressing room. Two of the bedrooms, including the one with a dressing room, have their own shower room.The outbuildingsThese outbuildings are composed of a barn, once a chapel, the old stables now converted into a guest house (spanning a floor surface area of approx. 200 m²), a large garage, a room and a greenhouse. The last three outbuildings can be reached directly from the manor house.The parklandsThese fully walled parklands are composed of large lawns, planted with copses of trees of varying ...

Listings similar to this property, Angers (49)

Very beautiful property in the south of Anjou at about twenty minutes from ANGERS. The manor house, its former stables transformed into a dwelling and its numerous outbuildings, are...

Only 10 minutes from the center of Saumur, is a park of more than one hectare enclosed walls, setting of this majestic castle of the seventeenth and its extension of the nineteenth. ...

Property with pool and garden Maine-et-Loire (49)

This 18th century property typical of the Anjou area was remodelled in the 19th century. Perfectly restored, it includes a wing fitted as a guest house. Set in a beautiful environment... 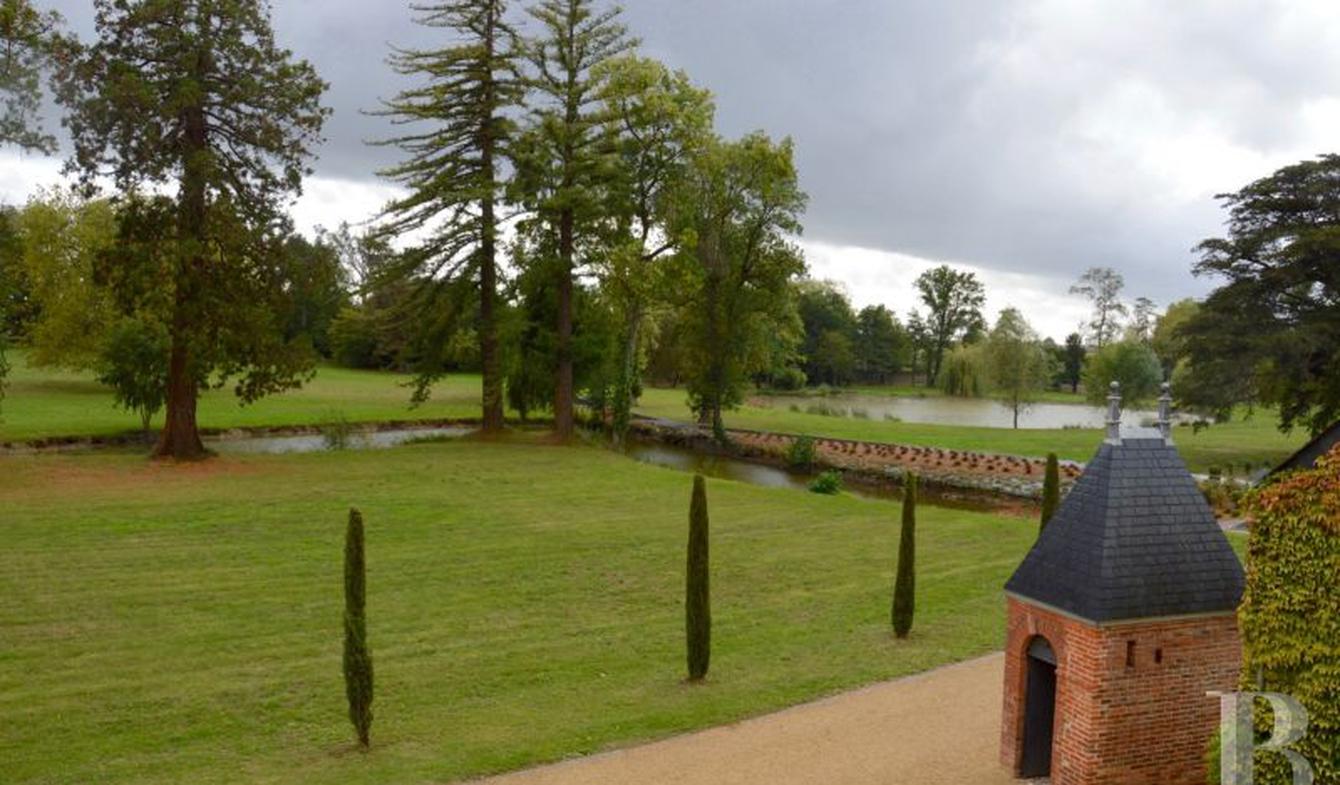