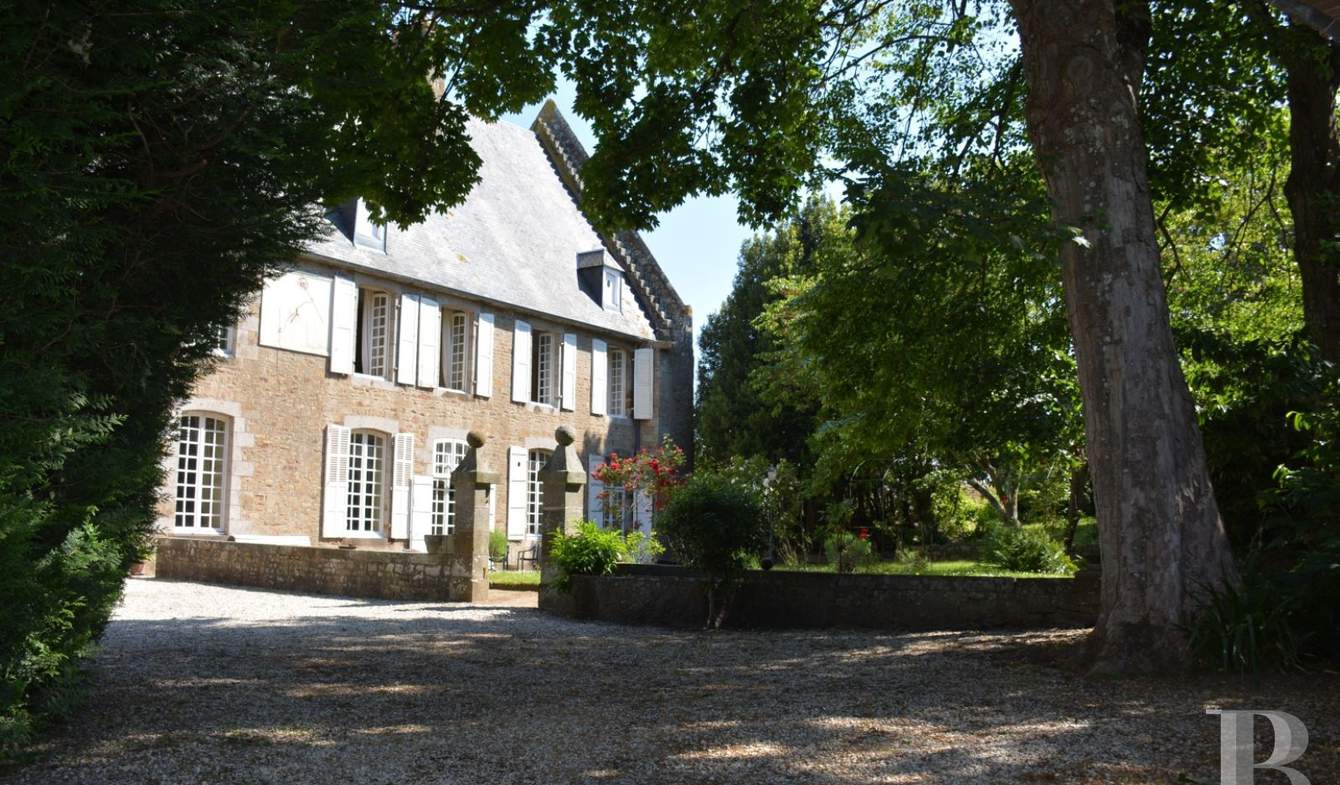 In the town of Avranches, 15 minutes from the beaches, a listed, 12th century manor house with its walled garden.Avranches, a historic town in the French department of Manche, is closely linked to Mont-Saint-Michel which faces it (a 30-minute journey by road). The seaside resort of Granville is also 30 minutes away. Saint-Malo and Rennes can be reached in less than an hour. In the town centre of Avranches, just a stone’s throw from Saint-Gervais Basilica and the Botanical Gardens which give a panoramic view over Mont-Saint-Michel Bay. Although this manor house stands peacefully in a district on the heights of the town, it is also very near to urban life with all its facilities (shops, schools, etc.).On the heights of the town, looking down on a small square, a semi-circular arched gateway with arch moulding is set in a high stone wall, behind which can be glimpsed the extensive foliage of a sycamore tree. The carriage gateway with its stationary transom opens on to a gravel courtyard, extended by a garden. This vast urban enclosure, an area shared by stone and vegetation, is deep enough to let visitors fully appreciate the manor house’s impressive facade. Topped with a slate roof, this large, tall building has a granite facade aligned with openings featuring drop arch lintels, typical of the second half of the 18th century. The dominating impression is one of a building with resolutely modern architecture. And yet, this sober facade conceals Avranches’ last, great medieval building, constructed in the 12th century. Up until the French Revolution, the building housed the deanery of Avranches. The dean presided over the chapter. This building was not, however, always home to deans. In 1790, the building was sold as National Property. In 1793, during “La Terreur” (reign of terror), the cellars were used as a detention centre and it was most probably here that all or part of the local aristocracy was locked up prior to being sent to the guillotine in Paris. This deanery, known as “Le Grand Doyenné”, also played an important part in local history during the Second World War. In fact, fearing the damage that armed conflict with Germany could cause to the large collection of old books housed in Avranches’ library, it was decided to store them safely in the deanery’s cellars. Following the bombing, the cellars also became a refuge for victims. The entire site and its manor house have French Historic Monument listing.The manor houseThis manor house, spanning approx. 500 m² of living space, measures more than 28 m long by some 14 m wide and is over 20 m in height. Externally speaking, its appearance has not changed since the 12th century, its ground surface area and its initial size remaining the same. Both gable walls have jagged outlines created by narrow stone stepping on the edges of the steep slate roof. The stairway which begins in the cellars used to be extended along the full length of the north wall by a very narrow wall-walk. From the top of its remains, there is an unobstructed view over the surrounding countryside and, notably over the Sée estuary. The north facade, approx. 2.26 m thick, with its granite stone blocks laid opus incertum and its five flat, barely protruding buttresses, has not been modified, whilst the south facade, looking out over the garden, was reconstructed in the 18th century, its thickness probably being reduced by half at this time so that it is now only 75 cm thick. The new facade now features seven openings on each of its two levels, making it easy to imagine the interior layout of the rooms typical of the Age of Reason.CellarThe cellars can be accessed from the inside via a stairway and from the outside via wide carriage doors on the north facade. This Romanesque cross-rib vaulted servants’ hall is of an unusual size, measuring …

Listings similar to this manor, Avranches

Ref. 3615 Remarkable listed urban manor house for sale in Manche It is rare today to find architectural jewels in a quiet environment, with all the shops accessible by foot. And this is...

Ref. 2465 Charming mansion for sale at 3,5 km from the sea 7 km from a lovely coastal town with all shops and services, the property is located in a traditional hilly Normandy...

Located 6 km from LESSAY where you will find all the services and amenities, on the wild coast of West Cotentin, this contemporary villa offered in the spray of the Channel, awaits you.... 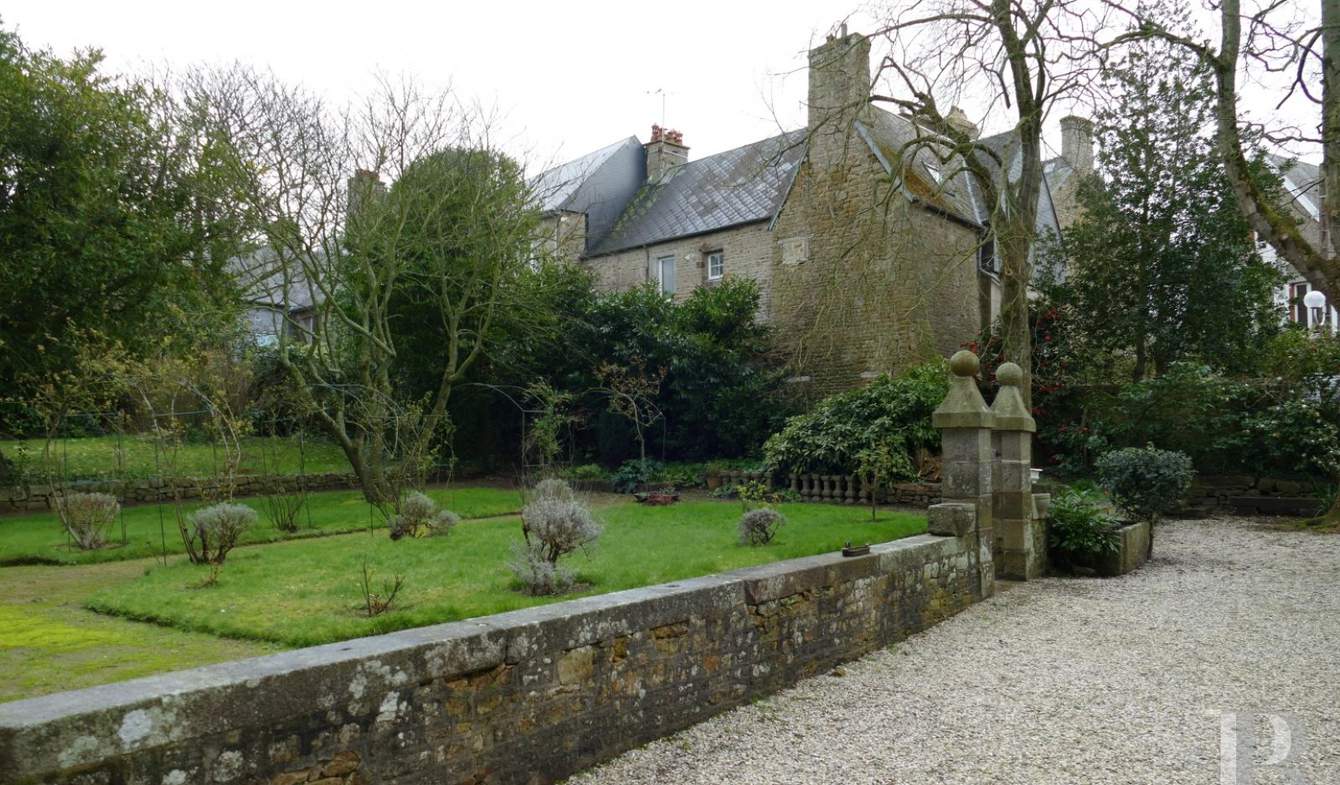