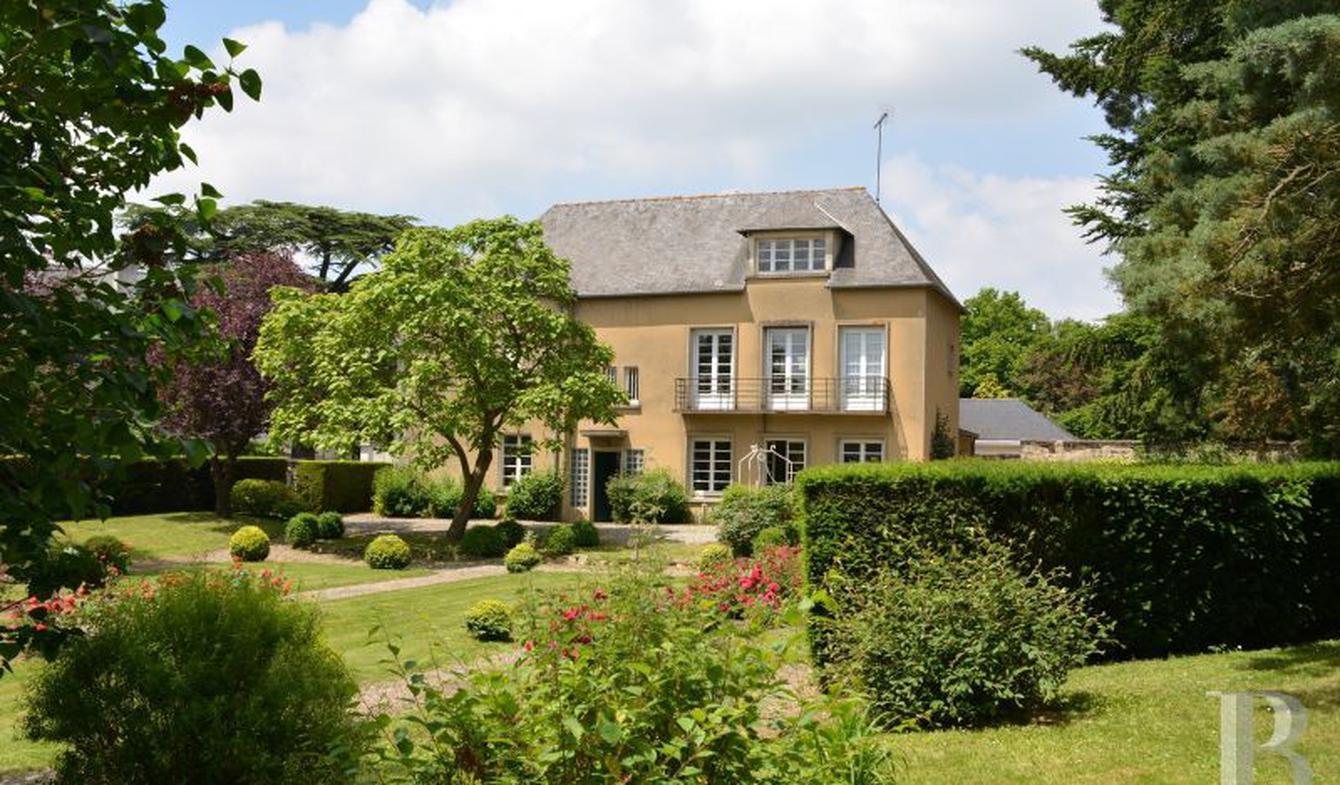 A designer house set in parklands 40 minutes from Laval in the French department of Mayenne.In a village with all shops and amenities. About 40 minutes away from the town of Laval, with its TGV train station and its 75-minute links to Paris. Near to the main road linking the towns of Angers and Rennes.A driveway leads from the street through parklands to a caretaker's house, a small brick pavilion, an outbuilding and the main house, the facade of which looks out over the street. The partially walled garden extends on two sides of the main house. A leisure garden on the south side, parklands on the east side and outbuildings as well as an old orchard-vegetable garden at the back.The houseThis house is composed of two buildings. The first dates from the 19th century and was constructed from rendered stone and quarry stone blocks. The second, dating from the 1950's, was built of reinforced concrete by architect J.-Perrin. It features wide windows opening on to the garden. Both buildings span three levels and have slate roofs.Ground floorThe entrance hall provides access to a ladies' sitting room, the stairway, a large living room, with a fireplace, a kitchen, a back kitchen, a study, a large room in use as a bedroom and a bathroom with a toilet. There is parquet flooring in all the leisure rooms.This entrance hall also provides access to cellars in the basement which also includes notably a boiler room and a well, providing the house with drinking water.First floorThis level consists of a corridor providing access to four bedrooms, each with a water supply point and cupboards. There is also a shower room with a toilet.Second floorThe landing leads, on one side, to a workshop with a 3.60 m high ridge, and to two bedrooms, each with a water supply point.The caretaker's cottageFeaturing local architecture, this cottage is built of rendered stone and quarry stone blocks. The openings are framed with freestone at the front and brick at the back. It has a hip, slate roof.Ground floorThe entrance hall provides access to a living room, a kitchen, a bedroom, with a small adjoining room, and a shower room with a toilet.The outbuildingsThe outbuildings comprise a small brick pavilion, used for storage purposes, an old stable spanning approx. 60 m², with an attic and storage areas, and, near to the house, a garage.

Listings similar to this property, Craon (53)

Tourist business opportunity for Sale, Mayenne, 2h30 from Paris, close to the sites of Saulges and Sainte Suzanne The property offers a 3 bedroom 17th century house (145m2), a Gite with...

A few minutes from Evron, this property complex on 8 hectare consists of a main building of about 250 m² bathed in light and in perfect condition, a stone farmhouse of about 170 m², a...

The agency Lair Real Estate in Pré en Pail offers for sale this 16th century property, full of history, on a plotof 2 hectares500.This old seigneurial property is composed of a large...

Your agency Lair Real Estate Pré en Pail offers for sale, north of Mayenne, this beautiful mansion completely restored with taste. It consists on the ground floor of a large entrance, a...