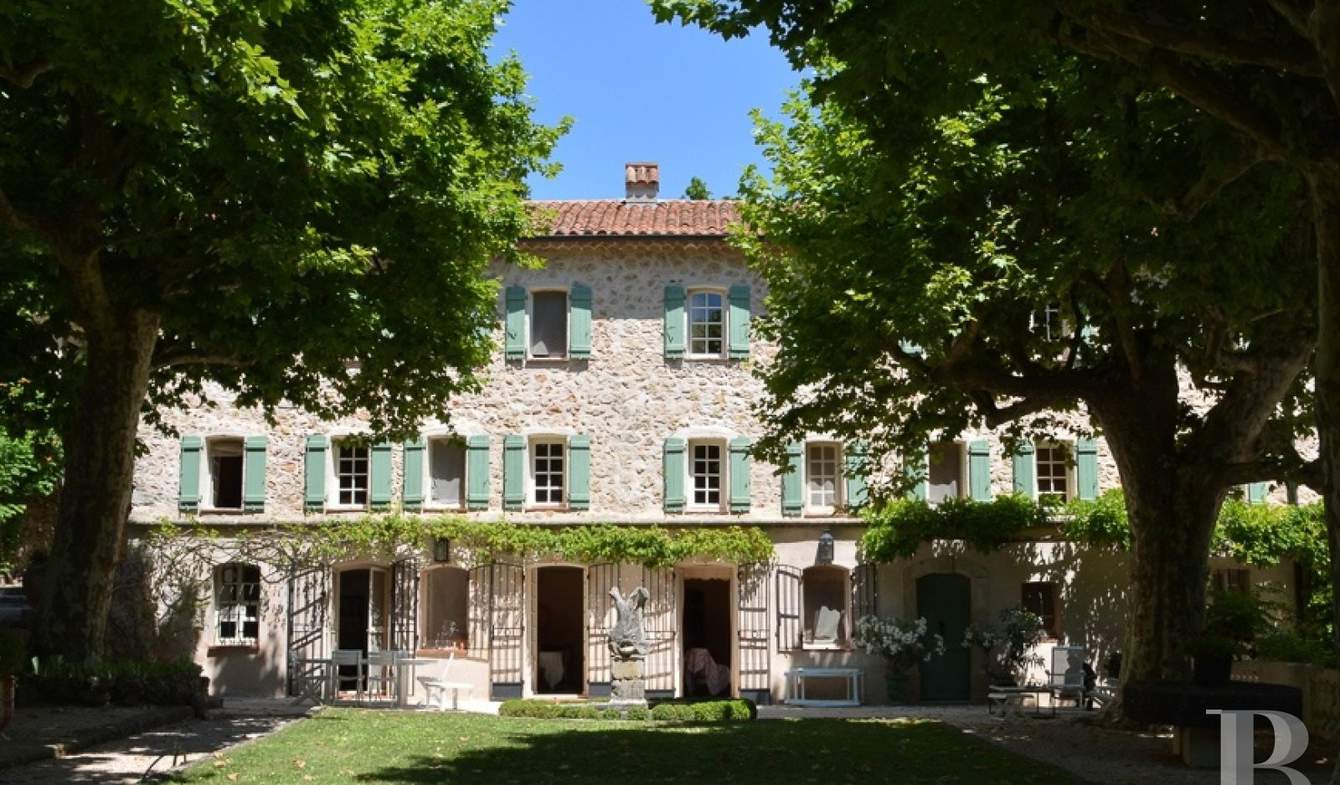 An 18th century, traditional Bastide house in a huge wooded garden near to Verdon Gorges in the midst of rural Provence.In the east of the French department of Upper Var, between Grasse and Draguignan, in the direction of Verdon Gorges, some 40 km away. Two picturesque villages, renowned for their medieval history are 2 to 3 km away. The unspoilt surroundings include steep landscapes, between rivers and wooded hills. Numerous streams flow near to the property and there are many old water mills in the area. The slip road on to the A8 motorway is 25 km away; a TGV train station is 30 km away. Draguignan is at a distance of 20 km. Nice international airport takes an hour by car. Sainte-Croix lake and Verdon Gorges are 45 km away. The Var beaches, towards Saint-Raphaël and Sainte-Maxime, are some 50 km away.This 18th century building, nestling in a natural setting, has been transformed over the years into a large family residence with its leisure gardens. Its tall south-facing facade, built of limestone quarry blocks, features some 24 windows with wooden shutters, painted in shades of grey-green. The windows are framed with dressed stone and the shutters still have their original catches. The gable roof is covered with Roman tiles. Facing this traditional Bastide house, an old ornamental pool with its fountain is set in a lawn parterre and a small topiary garden extends in the shade of plane trees, over a hundred years old. On the side and below, another garden with a stone ornamental pool filled with waterlilies collects water from a source, flowing down from a channel on the heights of the property. More steps, on the left-hand side of this traditional Bastide house, go up to a wisteria-covered terrace providing access to the second floor. At the bottom of the garden, stone steps lead to terracing where olive, oak and yew trees grow against the azure blue sky of the horizon. A swimming pool is set on one level. The panoramic view comprises wooded hills, villages with their bell-towers and hilltops for as far as the eye can see. A small chapel stands looking down on the end of the property. A caretaker’s cottage undergoing renovation works is to be found further down.The large, traditional Bastide houseThis residence, built in 1787, was originally a large farmhouse which probably belonged to a nearby earl’s chateau. It comprises several lounges, living rooms, a kitchen, a storeroom, a study and seven bedrooms spanning a total of almost 300 m² of living space.Ground floorThis garden level comprises a vast entrance hall, a lounge-dining room, a kitchen, a storeroom, a study, a shower room and a guest toilet.First floorThe first floor includes some superb, south-facing rooms with high ceilings. It can be reached via the outside terrace laid out at the top of stone stairways.Second floorThis level, comprising several bedrooms, a living room and a kitchen, could become self-contained.The caretaker's cottageAdjoining the traditional Bastide house with its own separate access, this house spans approx. 65 m² of living space and stands next to a private garden.The swimming poolThis 14x6 m swimming pool, set in natural surroundings on a wide level of terracing above the traditional Bastide house, is protected by a safety fence. The view takes in the surrounding villages and stretches as far as the hilltops several kilometres away. The swimming pool and the ornamental pools are fed by water (free of charge) from a small channel which flows abundantly, even in times of drought. Said water can also be used for watering purposes.The highland with the small …

Listings similar to this bastide, Fayence

House with pool and terrace Fayence (83)

In a quality environment, with a lovely view of the village and the valley, bastide of 249 m² comprising: on the ground floor, an entrance, a dinning room with an open fitted kitchen, a...

House with pool and terrace Fayence (83)

With a lovely view on the villages and the montains, villa of 373 m² comprising: on the ground floor, hall, a spacious sitting room with fireplace, a bright living room with an open...

** Exclusive Sale **Very pleasant environment for this exceptional property . Composed of a Mas in stone with a dependency in stone of 25sqm, as well as a garage of 80sqm.Entirely... 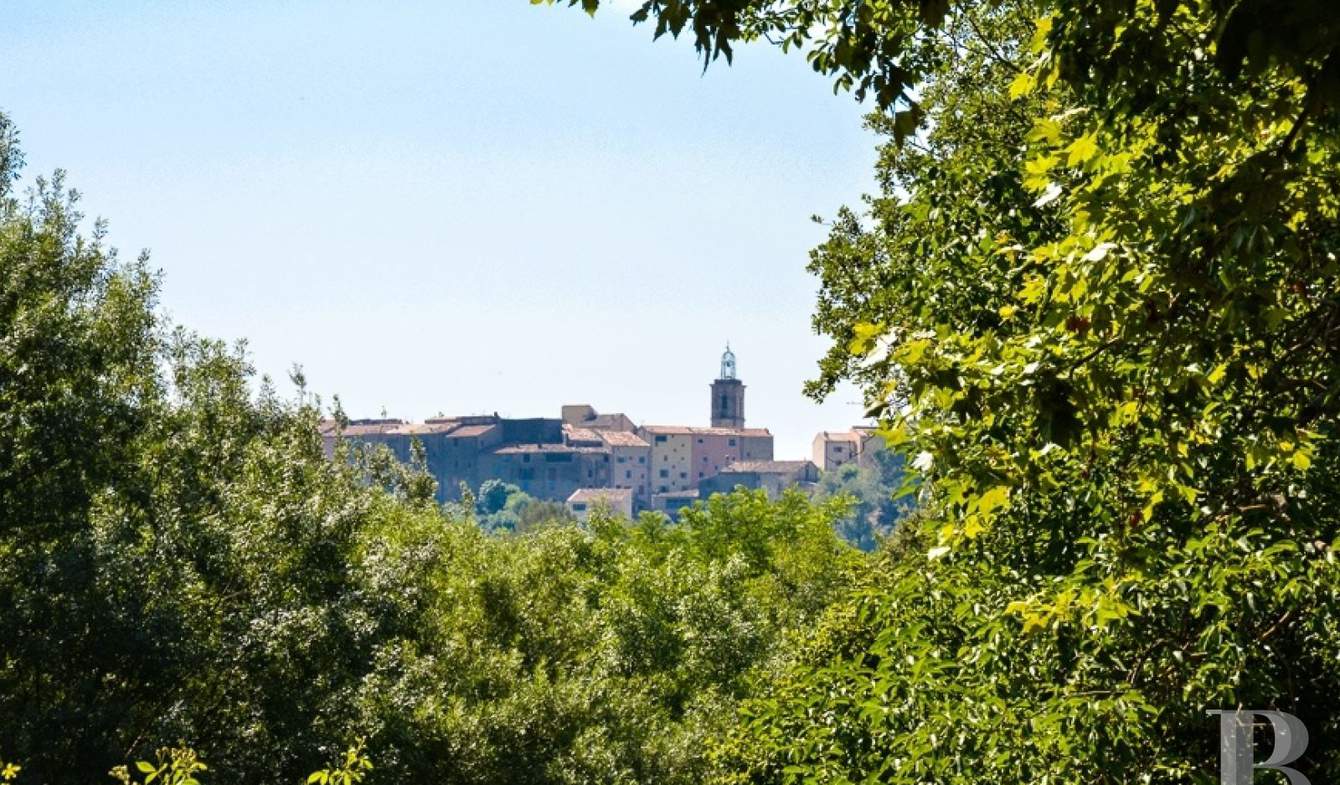