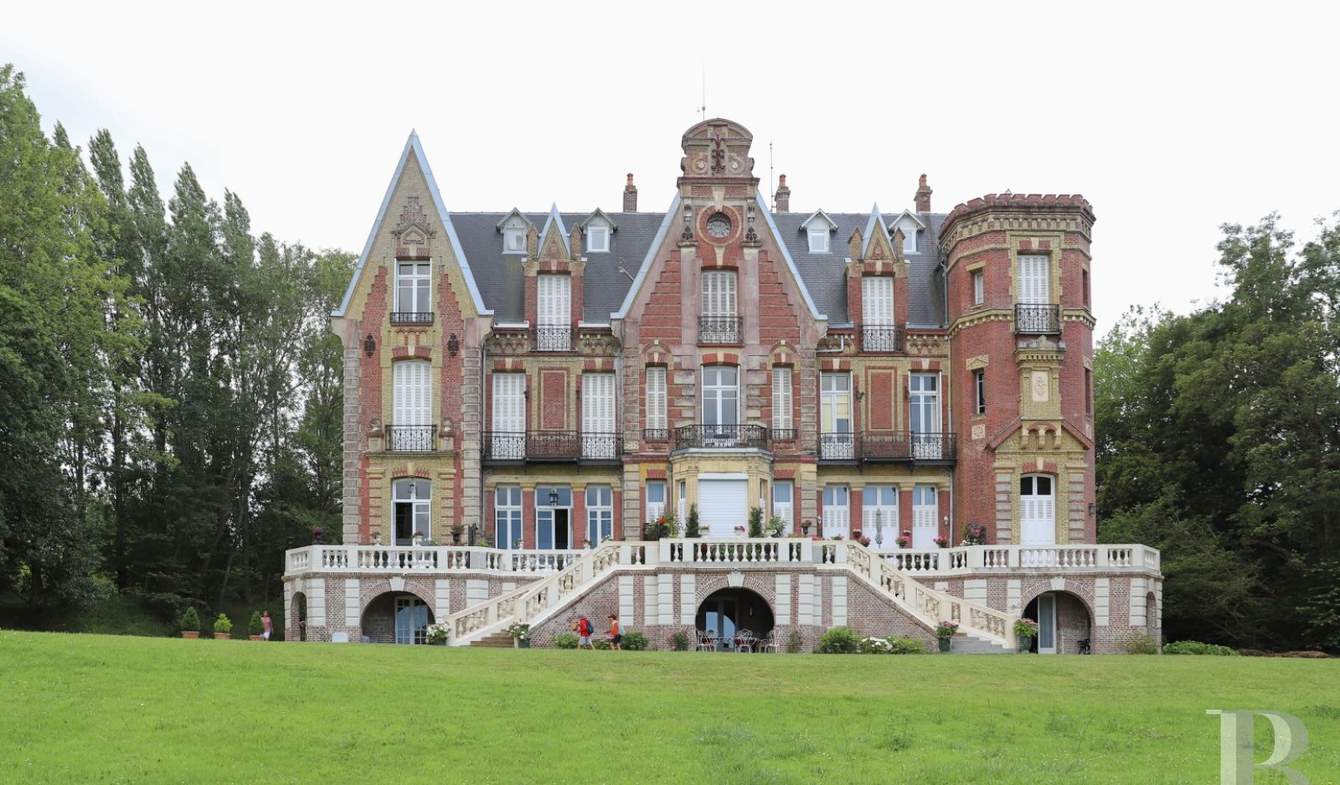 Two flats in a large, co-owned, 19th century chateau in a seaside resort on the “Fleurie” coast along the Channel coastline.The seaside resort, between Deauville and Houlgate, is 200 km from Paris by road (A13 motorway). Paris-Saint-Lazare can be reached by train in just over 2 hours from Deauville station, 7 km away. Caen, with the large infrastructures of a county town, is 45 km.Entrance gates, on the heights more than 600 m away from the town, provide access to what was the property of the Countess of Béarn. Preceded by tall trees, the chateau is constructed on the historic section of the cliff area. It is surrounded by vast lawns, planted with numerous trees and dotted with pathways, with little bridges spanning a stream. Flights of steps on the edge of the property lead down to the sea.The neo-gothic chateauThe chateau was constructed in 1877. Its red brick walls feature a very large number of openings. Most of them are French windows protected by railings. The quoins, the jambs, the lintels and the cornices are made of dressed stone. The hip roof is covered with slate and features numerous roof dormers, some of which have hanging windows. Although its rectangular layout is symmetrical, the main facade is not. The central bay forms a projection. A bay window in the middle is topped with a terrace. The ends of the facade end with a gable wall on one side and an adjoining octagonal tower on the other.The main facade of the manor house is surrounded by a terrace, extending slightly at right angles at each end. This terrace can be reached in the centre by a dual stairway and at each end by straight flights of steps. Each provides private access to the flats, each with a section of terrace, separated by artistically wrought fencing.The flat with a sea viewA straight flight of steps on the gable end of the chateau’s main facade provides access to the terrace, paved with cement tiles. A wide, glazed, French window opens into the flat which has 4.5 m high ceilings. The colour of the walls is light, sober and elegant. The lounge, illuminated via two large windows, is separated from the open-plan kitchen, set at the back, by a counter. A discreet door leads to a toilet. At the opposite end to the windows, a narrow flight of steps goes up to a comfortable mezzanine, bordered by metal railings. A shower room and a dressing room are laid out at the rear of this night-time area.The studio flat at the entrance to the chateauA wide flight of steps goes up to the chateau’s porchway, paved with cement tiles. A large entrance door opens into the chateau hallway. A main stairway goes to the upper level. The floor is covered with herringbone pattern, oak wood parquet flooring. A corridor leads to the studio flat.A first door opens into a little lobby, providing access to a shower room, a toilet and cupboards. A second door opens into a room, where light floods in through a window and a French window protected by railings. The walls are painted in a light, sober and elegant colour. The floor is covered with herringbone pattern parquet flooring. The ceiling is 4.5 m high. Further back, a counter precedes the kitchen, fitted with light-coloured oak wood units.

Listings similar to this house, Deauville

Apartment with terrace and pool Deauville (14)

For sale, apartment Deauville Normandie PIERRE FLORE IMMOBILIER, specialist in quality properties in Normandy introduce yourself DEAUVILLE, RESIDENTIAL 200 meters from the beach, in a...

*** NORMANDY IMMOBILIER EXCLUSIVE *** DEAUVILLE, Within an enclosed and secure domain, Les Hameaux du Côteaux, discover this recent apartment with 3 main rooms with a surface area of...

Located in a seafront residence in Deauville, this beautiful one-bedroom apartment boasts a large balcony and delightful sea views. Offering a total living area of 53.6 m², the apartment...

House with garden and terrace Saint-Désir (14)

Exclusive Nearby Lisieux, in Saint Desir close to the shops. We propose this house built in 1972 built on a wooded park, maintained, enclosed more than 6000 m2. It consists of 9 main...