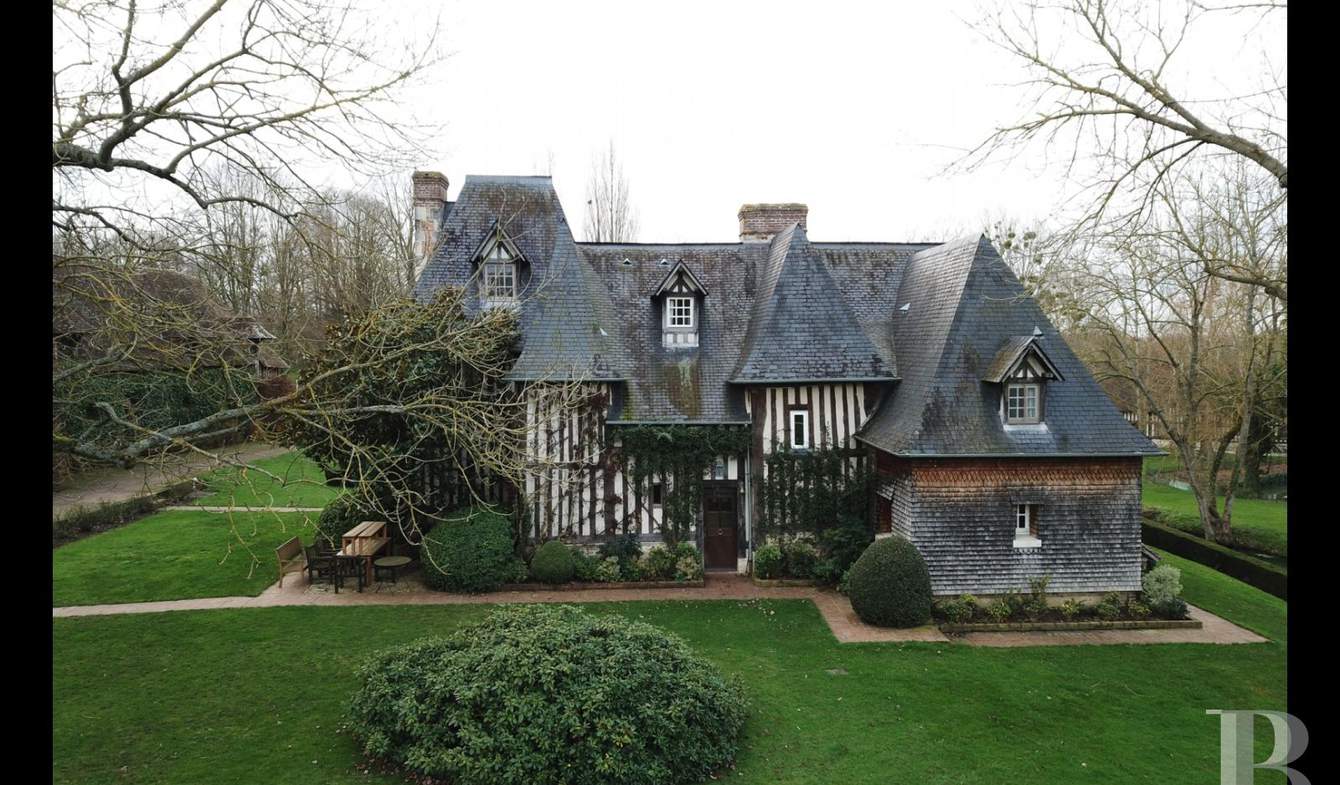 A 17th century manor house, with 3 other half-timbered buildings, a French-style vegetable garden and 64 ha of grasslands, in the Auge Country.This property, about 2 km from Crévecoeur-en-Auge and its famous medieval castle, stands along the royal way between Normandy and Paris, the French capital being some 220 km away. Deauville, Cabourg and other towns on the “Côte Fleurie” (Coast of Flowers), on one side and, Lisieux on the other, with all the amenities worthy of a subprefecture with 20,000 inhabitants, are less than 30 km away. The road leading to this manor house winds its way between the horse stud farms in this bocage countryside composed of irregular-shaped fields separated by hedges and ditches.Wide wooden gates, bordered by hedges and tall trees, open on to this property. A well-packed track, bordered by cone-shaped boxwood, runs alongside a vegetable garden. A high cedar hedge separates it at the back from a tennis court and a swimming pool, with its pool-house. This curved track goes up in the direction of the manor house, through lawns to an esplanade. With a third of the building enclosed by a moat, the manor house as well as three other buildings surround a vast, slightly sloping, grassy area. All around, meadows are planted with apple trees.The manor houseThis manor house obviously reflects the architecture typical of the Auge Country, with half-timbered walls on quarry stone block lower sections. Its main facade comprises a building flanked by a taller, square pavilion, protruding very slightly at right angles. The main building is topped with a slate, gable roof, featuring roof dormers, whilst the pavilion has a hip roof. Two chimney stacks built of dressed stone, inset with orangey-coloured bricks, are topped with rows of a darker brick and provide a touch of light.Curiously, the rear of the manor house is completely different. The square pavilion appears to be set back whilst, the other end comprises a clearly protruding section. Its roof, featuring roof dormers, has three slopes and the walls are covered with chestnut wood weatherboarding. Between the two, the roof is divided into three sections: the slope of the two ends has been replaced by a roof with three slopes, thus increasing the attic space under the rafters.The manor house is surrounded by a terrace, paved with bricks and dotted with decoratively-shaped boxwood. Fig and magnolia trees as well as forsythia bushes enhance the half-timbering.Ground floorA little glazed door, in the middle of the rear facade, opens into a hall which provides access, on one side, to a toilet as well as a pantry and, on the other side, to a kitchen, illuminated via openings on three sides. Between the two, a door opens into a double lounge, separated in the middle by open half-timbering. The floor is paved with old terracotta tiles, the beams as well as the joists are exposed and two large, dressed stone fireplaces face one another. The hearth of one fireplace houses an Alsatian, wood-burning stove, covered with white, glazed brick. A door communicates with an adjoining dining room. Illuminated via openings on both sides, only its beams are exposed and painted white. Its dressed stone fireplace, with its wooden lintel, is similar to that in the lounge. Its terracotta floor tiles are also old like those in the lounge.First floorA stairway goes up to a little landing which provides access, on one side, to a study and, on the other, to a bedroom. This level features exposed beams as well as joists and has light-coloured, oak wood parquet flooring throughout. A few steps opposite a dressed stone and small brick fireplace lead from the study to a bedroom and its fireplace. A bathroom, a toilet and a dressing room on a lower level, reached via a few steps, adjoin this bedroom.On the other side of the landing, a …

Listings similar to this manor, Cambremer

Ref. 3723 Authentic listed manor for sale at the gates of Caen This elegant mansion is located in the heart of the Calvados department, away from a town providing most of the local...

Manor Near DEAUVILLE and the beaches Access A13 and N13 - south of Pont - L'Evêque in green countryside. Beautiful and authentic Norman manor at the end of the 13th century, totally...

A delightful, half timbered Normandy Manor House, originating from the XVIIth and XVIIIth centuries, nestled in a small Hamlet with extensive views over a well preserved Valley. ...

2 hours from Paris, 20 minutes from the sea and 10 minutes from Caen, a superb 17th century manor house in very good condition with a lot of charm, classified as Ismh, in the middle of a... 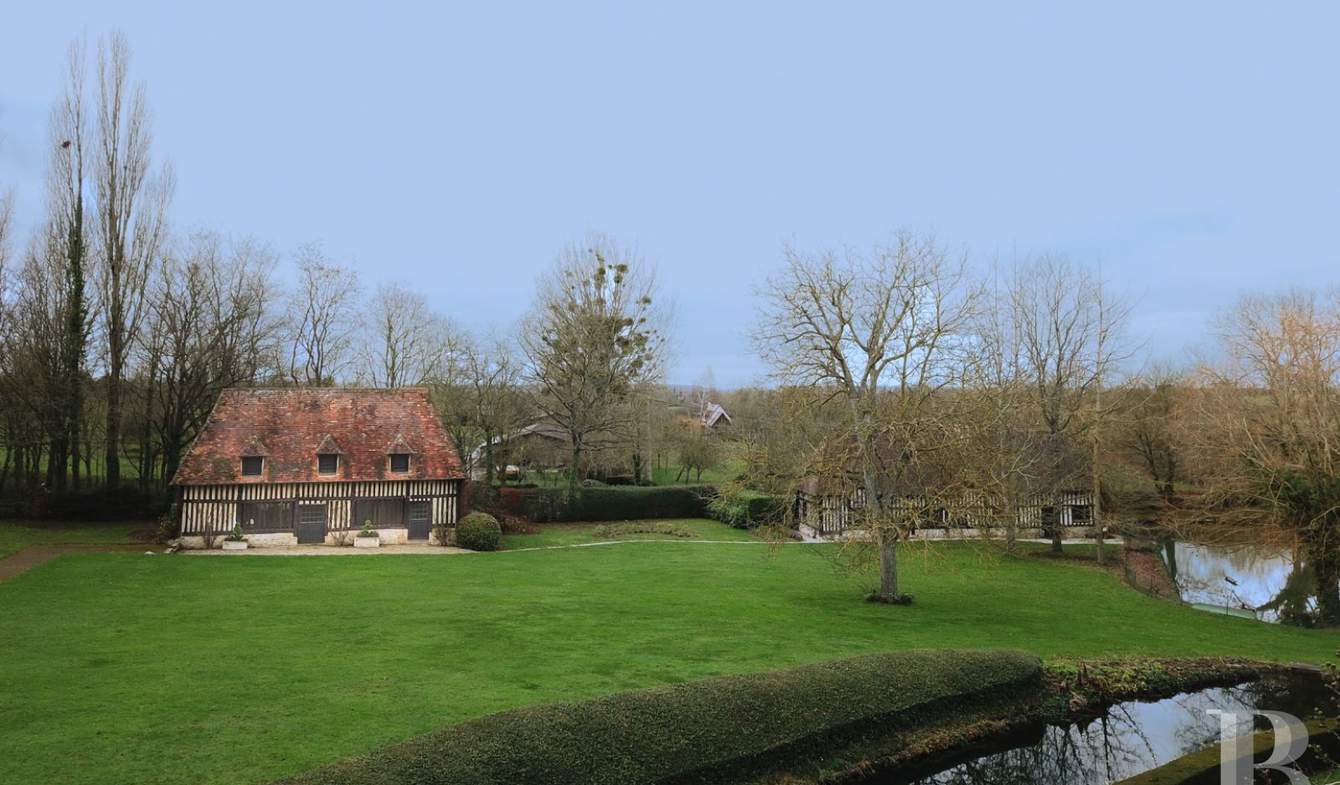