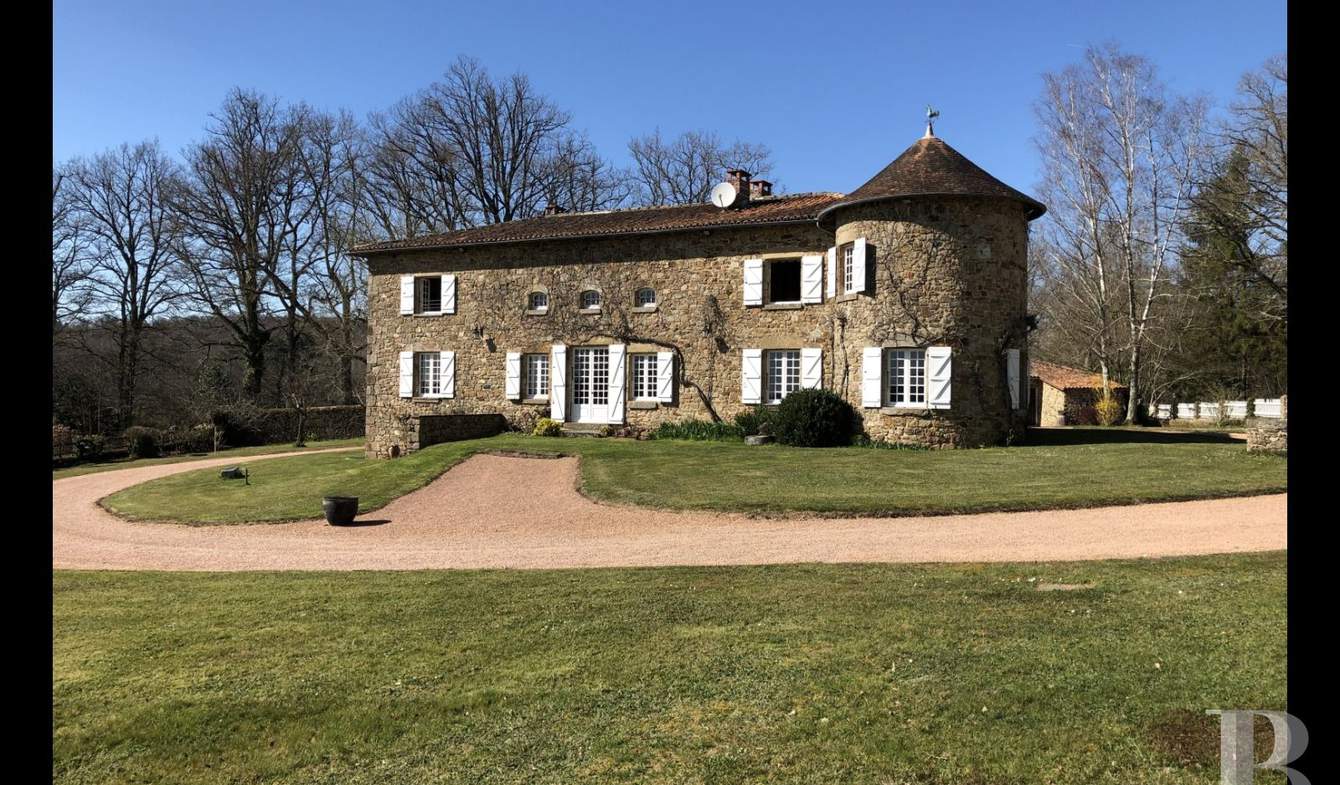 An isolated, 1964 house, constructed by skilled craftsmen using traditional methods, with a dominating, panoramic view and 1.3 ha of enclosed parklands, between Angoulême and Limoges.Two hills away from the Green Périgord area and the French department of Haute-Vienne, where the valleys of the river Tardoire and the river Renaudie in the French department of Charente extend to the edge of Périgord-Limousin Regional Nature Park. Vast pasturelands form scenery dotted with pathways, ideal for hiking, horseback riding and mountain biking. The town of Montbron, 12 km away, has all amenities. Angoulême TGV train station, 45 minutes away, makes it easy to get to Bordeaux and Paris, whilst Limoges airport, an hour away, has international flights. And lastly, an 18-hole, international golf course is but 6 km away.This fully delimited property stands on the top of a hill that slopes gently down to the edge of the French department of Dordogne. It is protected on the north side by a row of trees and to the east by woods, abounding in wild mushrooms. Facing south, its only neighbours are a flock of sheep and it has an unobstructed, clear view over the countryside. The parklands are enclosed by a low stone wall, topped with chestnut wood railings, which blends in with the scenery. The lawn is dotted with miscellaneous species of trees and shrubs including yellow poplar, white acacia, Lebanon cedar, purple beech, lime, birch, camellia, rhododendron, rose and forsythia.Remote-controlled gates with an interphone security system protect the main entrance which opens on to a driveway, bordered by a clearing as far as the entrance to the parklands. A garage, able to contain three cars, and a workshop are adjoined by a woodshed and a lean-to. This is followed by a high wall, in which is housed a second set of mechanical gates.The roof, redone in 1999, features ten 500 W spotlights as well as lights diffusing a more subdued light. The guttering carries rainwater to five underground tanks, the overflow of which is evacuated to a well, fitted with a pump.The houseConstructed from exposed, lime-pointed, granite stone blocks, this house was remarkably well built using traditional techniques, with dressed stone quoins and framing around the openings. The entire house is built on ribbed floors with filler and the foundations, that make good use of the lie of the land, include a 80 cm crawlspace where wiring and plumbing are concealed. A semi-underground cellar can be reached from both the inside and the outside.The traditional roofing framework is made of oak wood and the roof covered with Roman or half-round tiles.Ground floorSeveral doors lead inside. A corridor on the north side, with terracotta floor tiles, connects the two ends of the house to the vast lounge which takes up the middle. The kitchen, fitted with a serving hatch and all the units of which are included in the sale, adjoins a small vestibule which houses a large Périgord-style, granite fireplace and a built-in jam cupboard.Under a ceiling with exposed oak wood joists, a long dining room, with chevron-pattern parquet flooring made from two species of wood, ends with a Louis XV period fireplace. In the tower, a small round adjoining lounge features two built-in showcases and an outstanding rose, composed of three species of wood, in the centre of its parquet flooring.The lounge forms the building’s main room. Its 4.75 m high French ceiling dominates a straight, elm wood stairway and a mezzanine corridor, the unusually-shaped railing balusters of which date from the 17th century. Its monumental fireplace was created by reusing an old mullioned window. The floor is covered with black and white marble tiles, laid in a chessboard pattern. The framing around the doors leading to the dining room and the bedroom features wood panels, …

Listings similar to this house, Montbron

5 MIN FROM COGNAC Attractive charentaise house of 3121 sq ft on two levels, dating 1870, located in a village with all amenities. South exposed, it has a lovely wooded park of half an...

An early, 18th century residence and its outbuildings in 3 ha, 40 minutes from Angoulême, where the boundaries of the French departments of Charente and Dordogne meet. This...

Located at the gateway to Cognac, in a beautiful setting, this character house combines modern architecture with elegant old-style features (wood and terracotta tiles floots, old...